Czech-Chinese relations have been in the news a lot lately, but how have they really developed over the decades? And how should we view Chinese moves to develop a new high-tech form of totalitarianism involving facial recognition and “social credit”? I discussed those issues with Professor Olga Lomová, head of the Department of Sinology at Charles University’s Faculty of Arts. But I first asked the country’s leading sinologist what had led her to the field. 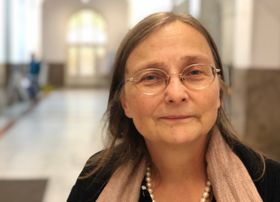 Olga Lomová, photo: Ian Willoughby “I started to study the subject many, many years ago, during the previous regime.

“I really didn’t like living in the, let’s say, intellectual environment imposed on us by the system.

“I wanted to do something very far away from this reality and I really liked Chinese poetry, as I read it in translations.

“So I thought I would study something beautiful and far away from this world.

“Of course when I started to study the subject I came across the simple fact that China was enemy number one in socialist Czechoslovakia.

“Because we were in the Soviet camp and China was anti-Soviet, this is the famous story going back to the late 1950s and mainly the 1960s.

“So that was my education at the university, but I of course still kept my dream and was pursuing my study and researching in other directions on my own.

“But this is the beginning of my sinological career, let’s say.”

“When I started to study the subject I came across the simple fact that China was enemy number one in socialist Czechoslovakia.”

“No, I had no opportunity to travel to China.

“It came only in the last year of my master’s programme, just by coincidence, and I as sent there as an interpreter to the embassy.

“But I had an idea of what China looks like and I didn’t like it – because it was even darker than the world we lived in.”

I’m curious about one thing. When the Tiananmen Square massacre happened in June 1989, how did that news reach the Czech sinology community?

“We basically didn’t have much coverage in the media.

“Actually I remember the first real appearance of the events on Czech TV was after the crackdown, when students were being captured by the police.

“There were pictures, but very short ones. I still remember a very short scene of students with their heads pushed down by the police being brought to court.

“And I remember I nearly wept, because it was so violent and humiliating.

“We did have information from the Western media, which we somehow could get access to.

“But there were no Tiananmen tanks or the emblematic picture of the ‘tank man’ – nothing like that. Tiananmen Square massacre, photo: Czech Television “Then there was a short message from our government, in the newspapers, praising the Chinese authorities, that they did a decisive blow to the counter-revolution.”

After the Velvet Revolution, in the 1990s, how were relations between the new Czech Republic and China?

“There are several aspects of this which are usually forgotten.

“Czechoslovakia was one of the first countries in the world that acknowledged the People’s Republic of China 70 years ago – I think three days after the announcement.

“People should remember there were many countries in the West that didn’t recognise the People’s Republic of China for many years.

“We established a very good relationship in the 1950s, which then deteriorated due to the inner clashes within the Communist camp.

“But despite all the clashes, conflicts and animosities, the agreements which were concluded in the beginning of the People’s Republic of China remained valid.

“Already in the mid-1980s there were some attempts on both sides to reconcile and this continued.”

But I’m sure the Beijing authorities didn’t appreciate Václav Havel’s support for Tibet.

“In Czechoslovakia there were no Tiananmen tanks or the emblematic picture of the ‘tank man’ – nothing like that.”

“This is very interesting. The Chinese authorities very much wanted to invite Václav Havel for a state visit to China.

“I don’t know the details, of course, but I was told that there were repeated to invite him for a state visit, which he made conditional on visiting not only the capital Beijing but also Taipei and Lhasa.

“And of course something like that could not be accepted by the Chinese authorities.

“I have to stress this is what I heard. Maybe it’s a legend.

About five years ago the then Czech minister of foreign affairs, Lubomír Zaorálek, announced that the Czech Republic was going to “reset” relations with China and to foster closer ties. Five years later, how do you think that resetting worked out for the Czech Republic?

“In principle the whole word ‘reset’ is wrong.

“The only thing that was a ‘reset’ was an attempt to get rid of human rights as a priority of our international policy.”

But that’s a very important thing – the Czech Republic dropping its previous prioritising of human rights. 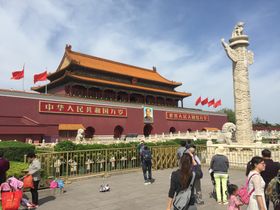 Beijing, photo: archive of Radio Prague International “I was referring to the word ‘reset’.

“The relationship existed and there was no need for example to conclude new agreements.

“The only reset was actually targeting our internal decision of having human rights as our priority in international relations.

“In the end the Ministry could not get rid of human rights as our signature and also as part of our identity, I would say.

“Our post-Velvet Revolution identity is totally based on human rights.

“I think it was a temporary attempt, very badly planned, and eventually nothing came out of it, I would say.”

But surely there are today warmer relations between the Czech Republic and China, especially given President Miloš Zeman, who I think has been around five times to Beijing? He’s really pushed closer ties.

“I think this is a misconception. Because regular exchanges – be they economic, cultural, in education – are still more or less the same.

“Yes, recently the Chinese sent many, many delegations, but these basically don’t change anything.

“It’s, like, travelling to Prague and I don’t know why. Sometimes I think it’s just to have fun on government money [laughs].

“The only thing that was a ‘reset’ was an attempt to get rid of human rights as a priority of our international policy.”

“There are also many more stipends for Czech students.

“As for President Zeman, he is visible, he can pretend to represent Czech foreign policy.

“But Czech foreign policy is decided by the Czech government and this is just a show for the Chinese, for reasons not quite clear to me.”

Why do you think China itself is so keen to get a greater foothold in European countries, to make investments, to kind of put itself about more than in the past?

“Well, I think it’s part of its global strategy.

“It started at the beginning of the 21st century, but it is very prominent since Xi Jinping came to power in 2012.

“Its ambition is to establish itself in Europe. 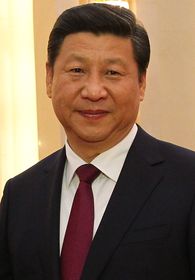 Xi Jinping, photo: antilong / CC BY-SA 3.0 “The Czech Republic is one of the small places, among many others, which eventually could be places that China could get hold of and make places for spreading its impact, or fulfilling its global ambition, I would say.”

Given the perception at least that there have been closer ties in the last few years, have you found there’s been an increase in the number of would-be students applying to study Chinese for financial or economic reasons?

“Actually, the number of students is declining. And it’s a general trend, not only in our country, all over Europe.

“I think it shows how China’s soft power has failed.

“This is again related to the political system.

“Even though China spends incredible amounts of money – I saw statistics and it’s something like 10 times as much as the United States – on presenting itself abroad and spreading its soft power, it’s soft power simply doesn’t take hold in the hearts of young people who want to study something interesting, inspiring.

“Even though they may eventually end up doing business or other very practical things, when they are students they have aspirations and romantic visions that they want to realise during their studies.

“And I think this is the basic reason why China is less and less popular among students applying to go to study something in the university.”

China is famously, or infamously, developing facial recognition technology and a system of social credit. It seems like it’s creating a new kind of totalitarian state, something we’ve never seen before. What’s your view of that?

“President Zeman can pretend to represent Czech foreign policy. But it is decided by the Czech government and this is just a show for the Chinese, for reasons not quite clear to me.”

“I can add one more piece of information.

“Recently I learned from my student that in Chinese universities, in the classrooms, you have cameras and during the classes everything is recorded: what the teacher says, what the student says.

“There are openly published articles – because apparently the authorities don’t see anything wrong about it – about how in kindergarten or elementary school very young kids are again recorded during classes.

“Schools are proud about being able to use these technologies to follow any movement in the class, including signals of students not concentrating, not responding in the best way, how a good student should respond, and then finding solutions to this.

“I think it’s absolutely crazy. I think there would be many people who would just go crazy, you know [laughs].

“I wouldn’t say it’s a totally new system. I think it is a well-known system we know from the Stalinist Soviet Union, and we lived in it a much milder version, during so-called normalisation.

“The only problem is that is brought to perfection with the help of modern technologies. 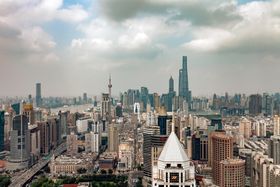 Looking to the future, can you imagine a day when China won’t be ruled by the Communist Party?

“This is very hard to answer.

“My personal conviction is that the system is inhuman and unnatural. Inhuman in the sense that it doesn’t conform to human nature.

“And if the system is like that, it cannot simply exist forever.

“Moreover, the recent very regulations, new laws and much greater tightening of the regime suggest that the regime itself is not very secure, it doesn’t feel very secure.

“If people really loved the Communist Party – and maybe we should stress the group of people who rule China, because the word ‘communist’ may be misleading for some people – they would not have to be controlled in such a manner.

“So these indications suggest that, yes, people in China will also live normal lives.

“But sometimes I am afraid that due to our misunderstanding – I mean our, in the West – and our misconceptions, China may successfully export much of its system and may eventually contribute to our own enslavement, I would say.

“The number of students is declining. I think it shows how China’s soft power has failed.”

“I think we have to discuss these things.

“We have to be absolutely open and clear about what’s going on in China.

“We should not be led by our disappointment in our current lives – and I don’t say we live in a perfect world.

“We should not be led to think that the Chinese system, or collaboration with China, is an option to solving our current problems.

“Collaboration, or having closer ties, with China can only make our situation even worse.” 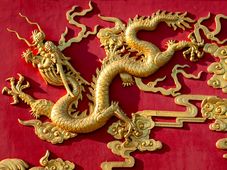