Pavel Bárta, the spokesman for the Czech Ice Hockey Association, is a former hockey journalist and author with more than 20 years experience. His most recent book covers everything from the 1920s in Czech hockey to the Olympics, including the Czechs’ famous gold win at Nagano ten years ago. In this edition of One on One: a look back at that tournament as well as Pavel Bárta’s early career. When we met at his Prague office recently, the former Bruins fan admitted to a lifelong fascination with North America’s NHL and he began by telling me what it was was like reporting from behind the Iron Curtain. Then, he was working at his first job with the sports weekly “Gól”.

“I was very interested in hockey and sports overall but especially hockey and the NHL. But there wasn’t a lot of information available back in those days – no internet – and of course we were behind the Iron Curtain, so they didn’t publish that much info, especially about Czech immigrants like the Štasný borthers and Václav Nedomanský. But I had some connections, including one at the Canadian Embassy, where there was a man who kept newspapers for me, sometimes even Hockey News, which was a real cause for celebration! I also visited the US Embassy’s library to read the Herald Tribune and the New York Times and I collected results and looked at who was scoring and who was playing and that was my start.

“When I began working with Gól magazine I got more involved and was able to find more information, even if it was tough. The first time I saw a ‘real’ NHL game was in 1986. It was the Stanley Cup final between the Montreal Canadiens and the Calgary Flames, and I was invited to watch it on video at the Canadian Embassy! The funny thing was that that very day I had completed my university-leaving exam at the Faculty of Journalism. But I refused to celebrate until I had watched the Stanley Cup game – it was the final match of the final series. I only celebrated afterwards.”

When you talk about the differences under communism and afterwards: what was the attitude in former Czechoslovakia towards hockey?

“Gól was very well-received, it had quite a high circulation and the reason was that the magazine was most geared towards soccer and hockey. And, it covered the NHL quite a lot, which wasn’t anywhere else. Although, it was kind of funny, there were of course politics involved: if we printed one page on the NHL, the opposite page had to be about how great Soviet or Russian hockey was so that it would be ‘balanced’. That was a bit of game.” Pavel Bárta (at the back) with Milan Hnilička (left) and Jan Hlaváč, photo: CTK “All the time and especially after in 1968 when Russian troops occupied our country. It was a kind of symbolic fight against the Soviet Union as a state. Hockey was a symbolic fight and it was hard to beat them on the ice. Every win was great. In 1972 we beat them at the World Championship I think after 23 years and that was huge. I was a little kid but I still remember my father jumping in our flat and shouting. That was great.”

When you think about the way the Russians used to play, are they still a “powerhouse” today?

“I think that they are starting to be again. They weren’t for a while – they had big problems in their hockey, many players left – but now they are improving. You can see it in the Euro Hockey Tour, where they recently won games by three, four points easily. We happened to beat them, but their level is getting higher and higher. The reason is because a lot of guys are returning from overseas, earning a lot now in the Russian league, which I think is beginning to be competitive against the NHL. That wasn’t before.”

On the international level, it seems to me that the rivalry between Canada and the Czech Republic is greater than it used to be.

“I don’t think so. But we like to play against Canada: nobody knows why because very often we are successful against them. We can beat Canada. Very often we’ve had problems against Sweden, Sweden stole many medals from us. Canada is a very attractive team to see for the fans, but our style somehow is good against them. Nobody can explain it! Back to the rivalry, our real rivals are the Slovaks, because the countries ‘split’ in 1993; we used to have a common team and we are something like a big brother to the Slovaks. We don’t take it too seriously but for the Slovaks, when they beat us, it’s huge.”

One reason why I think of Canada is going back to the semi-final at the Nagano Olympics in 1998, where the Czechs crushed Team Canada’s and Wayne Gretzky’s hopes of bring back a gold medal from the Olympics (the first in which NHL players were taking part).

“I was there! That was one of my greatest experiences in hockey! I have to say, even now, that I still don’t believe we won! I was most excited when we beat the US in the quarter-finals because the players were at their ‘top’: the best age, the best form and along with Canada they were the biggest favourites of the tournament. And they played great hockey in the preliminary round. When we beat Canada in the shoot-out [involving Patrick Roy against Domink Hašek – ed. note] I said ‘Oh my god, we are in the finals! The biggest tournament in Olympic history, the first time NHLers were taking part, I said to myself ‘we are so close!’ When we beat the Russians it had been 0:0 for a long time and I felt we could win. It has been ten years this year: already! When I worked with Dominik Hašek on a book about the Olympics we went through all the old photos again and remembered the events. It was great to go back.”

I’m sure you remember what crowds shouted at Hašek when the team returned to Prague.

“Yeah, yeah: Hašek for president! Another ‘candidate’ was Petr Svoboda, who socred the winning goal in the final game against the Russians. He had never played for the national team before: in the ‘80s he defected as an 18-year-old and played for Montreal and much later he got the invitation from coach Ivan Hlinka to play at the Olympics. His name in translation means ‘Freedom’ and he helped the Czechs win the greatest tournament in Czech hockey history! A great story.

Prior to the campaign I remember talking to one US hockey journalist who said “The Czechs can’t win: they’re too small, too slow, too soft! His prediction was wrong: we won!” 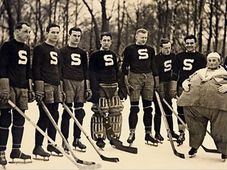 This Tuesday marks 80 years that the first match was held in the country’s first national hockey league. The teams Sparta Prague and Vítkovice… 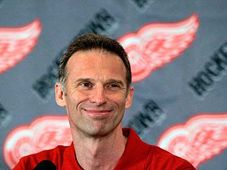