Robert Tomanek: Sokol Museum and Library will “tell the story” of Czech organisation in US

Robert Tomanek is currently in Prague researching a book about Czech immigrants to America and the Sokol gymnastics movement, of which he has been a member almost all his life. The Iowa-based scientist, who grew up speaking Czech, is also a member of the board of the Sokol Museum and Library in the US – an institution that he and his colleagues are now working hard to create. When Tomanek visited our studio we discussed all things Sokol, past and present. But we began with his own background. 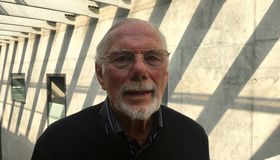 Robert Tomanek, photo: Ian Willoughby “My parents were immigrants from Czechoslovakia, in 1924.

“My father had a job waiting for him – he was a tailor in Omaha.

“He had a friend who was a bookbinder. He came over and wrote to my father saying that there were a lot of jobs in Omaha for tailors and he could actually get him a position.

“Which he did. So they were able to come because of that.”

How did they find the adjustment to the States from Czechoslovakia?

“Omaha had a lot of ethnic neighbourhoods and there were a lot of Czechs there.

“So most of their friends were immigrants and they maintained that culture, belonging to Czech organisations.

“And of course they slowly integrated into the American way of life.”

Tell me about your own initial connection to Sokol.

“Well, my father was active in Sokol, even here in this country.

“I wasn’t particularly interested in the gymnastics at the time, because I was involved in other sport, but I got an interest in gymnastics so I started, and that was my main interest.

“I competed for the Sokols and went to a lot of different meets and therefore I was kind of engrained in the culture as well.”

Is it the case that you met your wife via Sokol?

“It is. I was in a gymnastic camp and she was there and that was the first time I met her.”

Sokol was established here in the Czech lands in the 1860s [1862]. When did Sokol groups start appearing in the US?

“The Sokols ranged from New York all the way west to Omaha and some of the towns in Nebraska and then down south to Oklahoma and Texas.”

“Within another year there was other clubs in New York and Chicago and they really started to proliferate after that time.”

I guess the Sokols must have been umbrella groups for Czechs, giving them a kind of focus of the community?

“That’s correct. Sokol was very ingrained in the Czech culture and when some of these clubs started, even in very small towns, they would maybe have an opera house and would use that sometimes for a gymnasium.

“The Sokol was kind of the centre of the activity, because the other clubs would meet there.

“A thousand people maybe. I’m thinking in particular of Nebraska.

“There were small towns that are still small where the Sokols didn’t necessarily survive too long, but a few of them did, because there was a strong Czech population.”

In what other parts of the States were there more significant Sokol groups or clubs?

“The Sokols really ranged from New York all the way west to Omaha and some of the towns in Nebraska and then down south to Oklahoma and Texas.

“Finally there were some in California as well.”

Alongside the gymnastics, what was Sokol inculcating in its members? What values, or what kind of outlook on life?

“The whole Sokol ideal – which originated with a philosopher called Tyrš – was, A sound mind in a sound body. And they stressed morality as well. 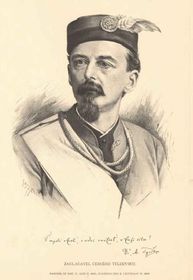 Miroslav Tyrš, photo: Public Domain “It was really a nationalistic movement in the Czech lands when they were under the Habsburgs.

“That nationalism gained its strength through Sokol, because they were training people.

“They even got involved in some militaristic things. There was a lot of marching, they’d do some fencing.

“That was kind of the heart of that movement. That spread, and eventually the famous legionnaires, in World War I, involved many, many Sokols.

“In fact Masaryk, the first president, said if it wasn’t for Sokol, there wouldn’t have been a Czechoslovakia.”

When you were a member, when you joined, what remained of that kind of philosophy?

“It wasn’t as strong, but we did learn about it.

“I think that the current Sokols now, maybe even here, probably don’t know as much about that and it’s not at all stressed.”

What shape is Sokol in in the US today?

“A lot of the clubs have folded.

“There are some places where there are some very strong clubs. New York, Fort Worth and Cleveland are three that I can mention.”

“Masaryk said if it wasn’t for Sokol, there wouldn’t have been a Czechoslovakia.”

Do you feel the organisation has much of a future?

“I think what will happen is that those clubs that are strong will survive and the ones that are going downhill probably will not.”

Tell us about the Sokol Museum and Library.

“We are trying to create a Sokol Museum and Library in order to preserve the history of the Sokol movement.

“This was an idea by the American Sokol organisation president Jean Hruby.

“We would like to be affiliated with the National Czech and Slovak Museum in Cedar Rapids [Iowa].

“They’re very enthusiastic about incorporating our story with their broader mission.

“So we’re in discussions with them about how this might come about.

“One way would be for us to get a place that would be within a block away from the museum and they would help us in running this type of an operation.

“It would be a great way to preserve the history.

“Because the National Czech and Slovak Museum is affiliated with the Smithsonian Institution, so this would give us a good way of spreading that story.”

At what stage are you in the planning or creation of the Museum and Library?

“Right now we are looking for various artefacts. 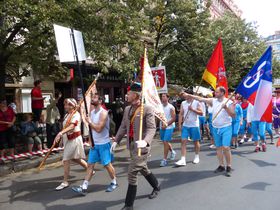 Photo: Klára Stejskalová “There is a man from Fort Worth, Rome Milan, who has a travelling museum where he brings equipment and items to different places, usually gymnastic meets.

“So that’s one of the things that’s already in place.

“Otherwise, we are waiting to see the direction we need to take about fundraising.

“It’d be nice to have the location settled and then start the fundraising.”

What will the Museum and Library actually do when it’s up and running?

“The museum would be telling the story.

“The idea wouldn’t be that we would have just one exhibit, but rotating exhibits about different aspects of the Sokol story, maybe some of them going back and starting in the 1800s, when it was very young, and how this developed, and them moving on to subsequent generations.”

I presume you’re already gathering things. What kind of items will you have?

“One important thing would be an online side, where we can have a lot of photographs and we can stories told on there.

“Otherwise, within the museum there’s a bust of Tyrš… perhaps some old equipment, old gymnastic equipment.

“Then we could have some videos that would tell the stories.”

What are you doing here now in the Czech Republic?

“Yesterday I met with someone at the national archives and they were able to provide with me with what they have in their archives going back more than 100 years.

“I was able to see documents where there exchanges between the American Sokols and the Czech Sokols, and I was able to photograph some of these things for the museum.”

“We would like to be affiliated with the National Czech and Slovak Museum in Cedar Rapids.”

And you’re writing a book?

“I’m working on a book which is actually called Czech Immigrants and the Sokol Movement.

“I’m focusing on the Czech immigrants’ story as they came to the United States.”

Were there any particular figures in US Sokol who were important in its history?

“There are a number of people who are long gone, but we had some presidents who were very effective. Charles Prchal was one of them.

“One of the things that I should tell you is that Sokol produced some very outstanding gymnasts, both here and in the US.

“In fact in the 1980s two Olympians came from the unit I’m from in Omaha.

“I think there are eight people on the US Gymnastics Hall of Fame from Sokols; some of them were competitors, others were people who organised things and spread the movement.”

Was it the case also that Sokol in the US helped to essentially keep Sokol alive during the Communist period here [when it was banned in Czechoslovakia]?

“It was really separated by then, pretty much, because it had been in the States within three years of when it started here.

“There’s a long history within the States and the Sokol just kept moving on and it was actually pretty strong during that era.”

You were telling me you’ve been coming here a lot, 15 times or something. What has returning here so often given you and your wife?

“My folks came from villages near Skuteč and my wife’s grandmother came from Polička. The distance between those towns is about 20 kilometres.”

“We’ve become very close to my family over here.

“My parents were from large families and they were the only ones who moved to the US.

“So I have many cousins. There children have come to the US and stayed with us and learned English.

Was it the case that your wife’s family came from the same part of the world as yours?

“That is correct. My folks came from villages near Skuteč and her grandmother came from Polička.

“And the distance between those towns is about 20 kilometres.” 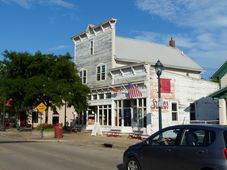 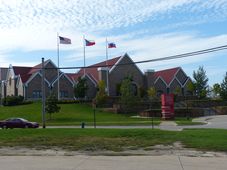 Sitting in a living room during World War II; lying on a bunk in a steam ship on your way to America or standing in Wenceslas Square…