Over the last twenty years, Ron Yerxa has produced a number of films hits. Together with his business partner Albert Berger, he has put out audience favorites such as the drama Cold Mountain or the massively successful road movie comedy Little Miss Sunshine, which won two Oscars. This year, Ron Yerxa was invited to preside over the Grand Jury at the Karlovy Vary International Film Festival. Just after the halfway point of the Czech Republic’s biggest film event, I asked him about his taste in movies, the festival as such and what the experience of being a juror had been like. 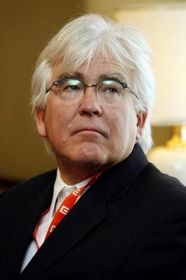 Ron Yerxa, photo: www.kviff.com “It’s really been great; the jury is so diverse, everyone is from a different country: Korea, Australia, and Europe. So there’s really spirited and free-flowing, kind of wild discussions about the aesthetics of film and what works, so it’s been kind of electrifying.

So how heated do these discussions get and how do you settle disagreements?

“Well, we haven’t deliberated for the final decisions yet, but as president of the jury, I try to make sure that everybody has their say about each film, because some people are so much more outspoken than others.

“And there is a difference in the level of English. So I think everybody should be able to express themselves fully, whether they are soft-spoken or animated.”

And in terms of the festival and the atmosphere here as such, how are you finding it? 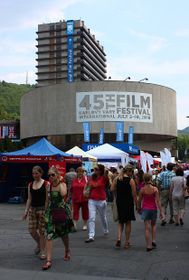 Photo: Štěpánka Budková “I think the festival is fantastic, so well-organized, a lot of fun. I’d heard about it for years, and had been eager to come. So when I got the invitation I thought ‘Wow, I’ve been wanting to go there.’ And my wife and I think that it’s one of the greatest festivals because of how much activity is on the street, how well organized the screenings are.

“I love the idea that the main screening venue is really filled and students are on the stairs. I know Jude Law was really taken with that, the spirit and the desire to see film and be part of film culture. So it’s been a great festival. It reminds us a little bit of Telluride, which is in Colorado. It almost has a little bit of the feel, because it’s a small mining town. And that’s a festival we like.

“But really, we couldn’t have had a better experience. It’s been a lot of fun and really edifying and a great exposure to film makers we wouldn’t normally meet.”

In terms of film selection, would you say that Karlovy Vary is an unusual festival? Would you say it features some sections which other festivals don’t?

“Obviously, there’s a lot more emphasis on European and Eastern European film, so in that way, it’s unique. I think it’s pretty diverse as far as the mix of documentaries, dramatic film and comedies go. So the selection is good and gives a full spectrum. But I particularly was pleased to see a lot of Eastern European films.

In terms of the festival circuit here in Europe compared to the US, how do these two differ? 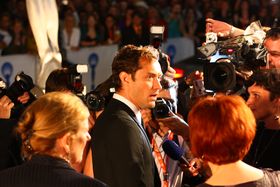 Jude Law, photo: Štěpánka Budková “You know, being an American and used to festivals where everybody is super-casual, it’s kind of nice that there is a black-tie opening and black-tie ending. And the formality of eating places is great.

“It was a lot of fun to hang out for a day with Jude Law because you get to see how an actor is treated. It has a lot more grandeur and dignity here. I like the Czech sense of humor. I didn’t know how full that was, the irony and the kidding around. So I’m really pleased that I can joke around with everybody and they throw it right back to me.”

You are a very well-known and successful producer in the US. Most people would know that being a producer is all about securing the money. But could you explain a bit what makes a successful or a good producer?

“Well, in the US, a producer was not so much about getting the money; it was much more about developing the script, getting the director and the cast. And putting together the film in a way that it had some integrity as a whole.

“But in an odd way, American producers are becoming more like European producers in the sense that they have to put the money together from three, four or five different sources and therefore, are much more entrepreneurial. 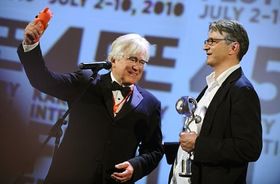 Ron Yerxa (left), Czech director Jan Svěrák, photo: CTK “It used to be great in a way when you could just take the film to a studio and they’d say yes or no or help you build it. But now, you really have to do a lot of the financial work yourself.”

In terms of your taste in cinema, could you maybe mention a few films that you enjoy thoroughly, that you keep coming back to?

“The films that kind of got me going where Godfather, Godfather II, Taxi Driver, Badlands… You know, I’m a big fan of American Beauty, and I was mentioning when I was in college Closely Watched Trains and My Sweet Little Village were big films.

“And Milos Forman of course is a big filmmaker and we’re just re-viewing the films that he did, Loves of a Blonde and Firemen’s’ Ball before he did Taking Off in the U.S. So those are all films that meant a lot to me.”

And lastly, what are your hopes and expectations for the rest of the festival? Photo: Štěpánka Budková “One is to stay awake, because I was staying up so late and drinking so much coffee last night that I kind of got the chills and shakes and I thought that I might have to take a day off. But we’re going back to the two screenings tonight. It’s been so much fun and great meeting people.

“I hope we have a strong finish, and I’m looking forward to the jury deliberation. And then I understand that the closing night show is often as entertaining as the opening night, so that should be fun, too.”