On Saturday 32-year-old long-distance swimmer Yvetta Hlaváčová completed the last leg of a 142 kilometre swim up the Vltava River, becoming the only Czech woman to have ever conquered the Vltava against the current. Hundreds cheered her on from the shore as she approached the finish line after 35 hours over seven days, an accomplishment to be set in the Guinness Book of World Records. Prior to the week-long marathon, we had a chance to speak to Yvetta for One on One, taped at Prague’s Žluté Lázně. We discussed the Vltava challenge as well as her greatest accomplishment to date – the fastest women’s crossing in history of the English Channel in 2006. She also told us how she first began swimming when she was just a kid. 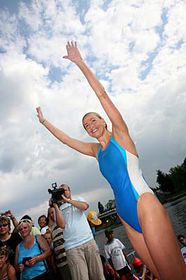 Yvetta Hlaváčová, photo: CTK “I was six years old, so I have now been swimming 27 years! Of course it was my parents’ idea: my father wanted me to swim so I started and I think that I will stick with my swimming into the future!”

What kind of sacrifices does swimming entail? I’ve always heard that swimmers have to get up very early in the morning from an early age, to swim before school. They put in many, many hours.

“Yeah. I attended a special school for swimmers and when I was ten, for example, I swam for two hours form six in the morning, and from three to five pm the next day. But it wasn’t just swimming: you also had to run, to bike, ski, and all kinds of different sports. So, training was often four or six hours daily.”

There are obviously different types of disciplines: why did you opt for long-distance over racing in the pool? Yvetta Hlaváčová, photo: CTK “Well I did race in the pool at first and swam in the sprint and 100-metre medley relay and the 100 metre butterfly and am the holder of Czech records in many disciplines. But to be honest it got boring. I was looking for something different in my life and that’s why I chose long-distance, which allows you to be on the beach, to swim in the ocean and is generally much more interesting because you are able to visit many different countries around the world. I have swum 40,000 kilometres and of course it was everywhere! In Argentina, Brazil, in Mexico, the US, and of course the Czech Republic.”

You’re the women’s world-record for the fastest crossing of the English Channel: what were your feelings when you realised that you’d done it?

“I accomplished the world record during a rest period in France: the problem was that five hours before my attempt I was ill and had thrown up and was in tears. I felt really, really bad and at the end of the swim I was just glad to have made it alive!”

Now that time has passed and the record has stood you must be very proud.

“Yeah, of course. The old record had stood for 28 years and I set a time of 7 hours 25 minutes and 19 seconds. That was really good. On the other hand, I’m not the kind of person who really cares about records. I simply like swimming and that’s what is most important, not records or achieving fame. Setting the record is a present for me.”

All the same, I did read somewhere that you wanted to set the new overall record for both men and women and that you believe that the Channel can be swum under seven hours.

“Yeah, yeah. I certainly hope to try it again and to set the record for fastest time for both. But it’s still just my dream. Again, not for fame, just because I like a challenge.”

Swimming the Channel must be extremely difficult…

“It is, of course. It is really difficult. There are more than 100 different currents and they can make it very tough. When I tried to break the record last year I was stuck in place for 50 minutes just 200 metres from the French shore. So, I will try again next year. You never know what’s going to be, especially in the English Channel. Last year too the weather worsened. My first three hours I saw really, really well and was on pace for a record, but then that changed. So I lost my chance.”

What the average temperature of the Channel?

Swimming is kind of a lonely sport, what do you think about when you’re undertaking such a difficult swim?

“It’s hard to say: normally I concentrate solely on the swimming. My breathing, the boat, my body, food intake, my stroke. I don’t know how to say it exactly, but basically if you are trying to swim really fast, you don’t really think about anything.”

“I’m trying to do better than last year, which is why this time around I want to swim the Vltava River up-river. It’s difficult because you are going against the current with a speed of three kilometres. Every day will be hard: from 15 – 26 kilometres, which is unusual: different from if you are training four hours daily in a pool and if you are six hours in a river! It’s also stressful because many people are watching you. I will only really be sure ‘about me’ in the end.”

What is the Vltava like as a river? Another journalist mentioned you ran into a number of drowned rats last year…

{laughs} “Yeah, of course you can run into the occasional dead fish or stuff like that but the Vltava is a beautiful river, especially outside of Prague. It’s very cold in places: the temperatures in the water range from just eight to 26 degrees Celsius, so sometimes it will be really, really chilly. On the other hand, I’m used to such conditions, so I should be okay.”

Amateur swimmer have also been invited to join you at stages: how well do you think they will be able to keep up?

“That should be fun: I think that some should try and swim with me. I hope they can keep up for maybe 50 metres. I am a professional so I much faster!” 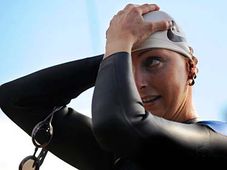 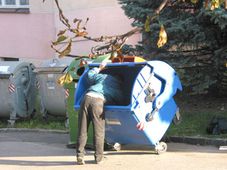 Is that a fish bone or a car antenna? Christmas is not a good time for carp but some of them get their own back. And, over 100 Czechs…