Entering Ryby & Chips on Myslíkova St. in downtown Prague is akin to being teleported to a fish and chip shop in the UK or Ireland, albeit one where the menu is in Czech. Over the years, others have had little success in finding a market for this kind of fast food in the Czech capital. However, Ryby & Chips co-owner Matthew Salmon believes an authentic approach will set his recently opened eatery apart. When we spoke at Ryby & Chips, I first asked Salmon about the genesis of the business. 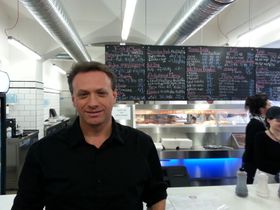 Matthew Salmon, photo: Ian Willoughby “My partners and I were sitting having a drink one evening and we had the munchies. I said, it’d be wonderful to have fish and chips here – and it just came about from there. It was like, OK, let’s go for it!”

“I used to go down Wenceslas Square and you’ve got all the fast food facilities there… I said even 10 years ago to my friends in England who run fish and chip shops that [opening here] would be a wonderful idea for them.

“Then there was one that didn’t work here close to Old Town Square. When I tried it, it was very greasy, it was not done properly. We’ve done everything as it’s done in England, traditional fish and chip shop style. That’s why I think it will work as well.”

Where did you get all the stuff here, like the fryers and so on? I presume they’re quite specific.

“The main fryer, the main range, was built for us in England and transported over here.”

Had you any experience in this business before? Or anything like this?

“As I mentioned, I have friends in England that run fish and chip shops, so when we started talking about this a couple of years ago I then did some training with them.

“Then when we picked the range that we were going to purchase, the producers offered a flying excellence course so we went on it…”

So you learnt the ropes and then you taught all the staff here?

“Yes. Also another friend of ours runs five shops in Cambridgeshire and when the range was installed we arranged for him to come over and he spent four or five days with our staff, training them up on best practices.”

What about the actual fish – where do you get it?

“It’s all from the Atlantic. We’ve got a couple of fishmongers that we deal with, but we specify that it has to come from a special trawler that concentrates on one area, because we’ve found that this is a better quality of cod and haddock.”

Where are your fishmongers? In the UK? 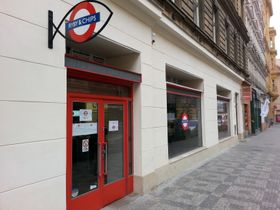 Ryby & Chips, photo: Ian Willoughby “One’s here in Czech and the other one is in the UK. But it still comes from the Atlantic, they still have to get it down to us, so whether it’s form here or Timbuktu, it’s still got to get here [laughs].”

Who is your target market?

“Czechs, tourists, local businesses around here – to offer them something at lunchtime and in the evening when they’re on their way home from work.”

I guess for a lot of Czech people it must be a new experience having fish and chips. They may have heard of it, or they’ve had once on holiday or whatever.

“Yeah, they may have heard about it or had it on holiday. It’s been out here for a few years. A couple of other places have tried it. But we feel our concept is more traditional.

I see you have a broad menu – as well as having fish and chips and stuff in that line, you have also have baked potatoes. But have you got any plans to expand the menu, to bring in things like batter burgers or maybe even fried Mars Bars for local Scottish people?

“We have homemade beef burgers here and we actually do battered burgers, it’s on the menu. We do battered onion rings as well…”

“Yeah, all the classics that you’re going to find in your fish and chip shop back home. We haven’t ventured for the Mars Bar yet. Another person has told us about the pizza…”

“Yes, the deep fried pizza. We’re not trying this one yet either [laughs].”

I guess there aren’t that many Scots in Prague.

“With this in mind, we have got a group of Scottish people around this area and they’ve been asking about haggis.

Photo: Ryby & Chips “We are in the process of purchasing haggis sausages, so when our next delivery arrives we will have haggis sausages which will then be deep fried in batter, which is what we’ve been told they have back in Scotland.”

I was wondering if there’s a danger if for some Czech customers this place could have novelty value – they’d come here once and think, this is interesting, but maybe not come again?

“We hope they’ve enjoyed the experience and then they find they’d like to come back again. The fish is nice, flaky fish, not typical of what you’d normally find here. It has a very nice flavour.

“What we’re seeing is that a lot of Czech people who are in this area are returning.”

Are Czechs willing to pay for quality fast food? I understand Czechs will pay more money to go to a nice restaurant and have a nice meal. But I think when it comes to fast food, they may not be that concerned about quality? I’m sure your fish is great, but they may look at the price and see 150 crowns or whatever – and that could be a lot for a Czech person.

“So the concept that we have, which is like a menu, with fish, chips, mushy peas and a drink for 109 crowns for the small cod or haddock, and 159 for the larger cod or haddock, I think it’s still a fantastic offer.”

“The sausages I find over here are very gristly, full of fat. We’re bringing in pork sausages from England, which are a lot nicer to eat, not so bitty. We also do fried cheese here, with an option of smoked or non-smoked.”

What about vinegar? I’m curious if Czechs take to it, or do they have to be encouraged to try using vinegar?

“A lot of them try it. A lot of people, especially expats, have been asking about malt vinegar, which we have also brought in now.

“There are two options of vinegar here. There’s a non-brewed one, which is a gluten-free one. It’s not so strong as malt vinegar. Malt vinegar is from barley, so for gluten-free people it’s not the one to have, but it is a lot stronger. People have the option of both.”

I know you only opened in December, but can you imagine a time in the future, if this place really takes off, when you might open another branch or branches? 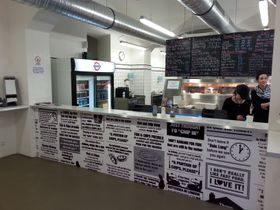 Ryby & Chips, photo: Ian Willoughby “This is our plan. We don’t want this to be the last branch. We want to start looking for and opening more places and to push out the Ryby & Chips logo further.”

What about the name – why did you go for the mixed language name? Is it because somebody had already used the name Fish and Chips?

The episode featured today was first broadcast on March 3, 2014.