We've just arrived, with about 25 fellow passengers, by coach from Plzeň in the Czech Republic, and we are now in the tiny German village of Friedrichshäng. It lies just on the Czech border, deep in the Bavarian Forest – or Bayerischer Wald – with Český les forest on the Czech side. We’re going to an annual event organised by locals as well as the Centrum Bavaria Bohemia, which is based in a town called Schönsee just a couple of kilometres west of here. The transportation is provided by the Centre as part of its “Cesta za kulturou” programme, or Cultural Journeys. The event today is Advent im Wald, or the Advent in the Forest. It’s an early Christmas-themed market held on a small hill in the forest just next to Friedrichshäng. Photo: Dominik Jůn Our group is now making its way through the forest paths, all nicely lit by candles and fire sticks. I can hear a band playing music in the distance. I’ve arrived now at one of the many market stalls here, all little huts made of wood. The lady here is serving me some roasted, caramelized walnuts.

Could you explain to me a little about his day?

“It is an annual tradition. It has been going now for fifteen years.”

I’ve now reached the top of the hill. The people here have very kindly found me another English speaker, Tomas, to help explain what is going on:

“It’s a Christmas market. It’s a really big family here. All the people who help here are very kind.”

From how far have people travelled to be here? Just from nearby towns like Schönsee?

“I have travelled 130 kilometres.”

Why did you come so far?

And Czech people come here as well, because we are literally right by the border, so is this a place for Czechs and Germans to meet and talk a bit? 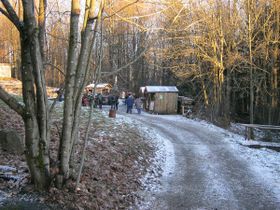 Photo: Dominik Jůn I’ve just bumped into Tereza Pechová, of the Bavarian Bohemian Centre in Schönsee. Tereza, what can you tell me about the Advent im Wald event and why does your organisation support it and want Czechs to come here?

“We think this is a very important place here, because it is near the border. And there is a very special atmosphere as you can see here, with many candles and numerous hand-made products on sale. Many Czech tourists come as well because the opportunity exists to come via a special bus...”

Yes, that is how I got here. With a group of about 25 from Plzeň. So you organise these Cultural Journeys several times a year. What is the overall point? Is it for Czechs and Germans to interact, to learn about each others’ cultures?

“Of course, but not only the visitors are Czech and German, but also those at the stalls selling products are both from Germany and the Czech Republic.”

I didn’t know that. Because there are many, many stalls here on the hill. It is quite a surprise to see just how many there are. I should also say that there is snow up here on the hill, which certainly adds to the special atmosphere. So this is a two day event – what exactly happens here? Tell me about Friedrichshäng, because it is right on the border. On the other side is the former, or lost village of Pleš – or Plöss. This used to be a smuggling route, right?

“Yes, during the 18th and 19th centuries [during the time of the Iron Curtain, people were also smuggled out of Czechoslovakia along this route]. Today, this place is also famous for summer open air theatre, which depicts this smuggling. And that is very popular here.”

And tell me a little more about the work of the Bavarian Bohemian Centre.

“We specialise in communication between the two nations. We also organise many workshops for students, for adults. Literature events. A mix of many things.”

I’ve come to another stall and there are some ceramic buttons for sale.

Young lady: “And earrings and jewellery. In the style of flowers, animals...”

And I see the sign says you are from Plzeň. So you are Czech?

“Yes. We have a workshop back home in Plzeň.”

Now I am with one of the Czechs who have travelled here via the special coach. The coach comes from Plzeň in the afternoon and then returns later in the evening. 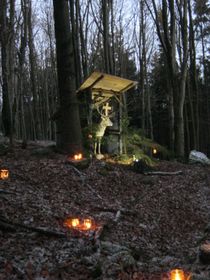 So Pavel, why are you here?

You say “we” – so you are here with a group of friends?

“Yes. And I like this event because it is fun here, and we can drink some beer, and we can go for a trip around here and we enjoy it.”

Now I’m with the local brass band, called Grenzlandblaskapelle Dietersdorf, that is playing Bavarian music here. I am just in discussion with the conductor about what they might be able to play for Radio Prague listeners – whether they will play something Bavarian or Czech...

Band member: “We will play the Czech polka ‘Přerovanka’.”

Ok. Danke schön. I’ve noticed that one of the band members can speak a little Czech. He tells me that the reason he speaks Czech is that he works there. Some Czech visitors are coming here to listen.

What I am doing now is that I am just walking out of Friedrichshäng, and I have just crossed over into the Czech Republic, walking down a forest path towards Pleš... 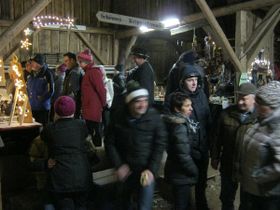 Photo: Dominik Jůn After walking a little over a kilometre, before me I see an empty field. This is where the village of Pleš once stood. It was a Sudeten German village, which was razed to the ground by the communist-era border guards. This entire area was placed within a forbidden border zone, so from pretty much 1948 onwards, there was no way that a normal Czech person could even come here. And that meant that whatever bonds had existed between Friedrichshäng and Pleš were basically cut off.

But today, as I am walking, some people are heading from the direction of the new village of Pleš – which is just a few houses and a pub – towards the Advent im Wald.

Now back in Friedrichshäng, I see groups of people keep coming. Both Germans and Czechs. I see another group of young Czechs here, and one of them apparently speaks English.

Where are you from and why have you come?

Young Czech man: “We are from near the town of Domažlice.”

Oh, so that is not that far from here.

“Yes. And we were here last year. It was an amazing night; we liked it a lot. We spent almost the whole night here.” Photo: Dominik Jůn I should mention that the stalls here are bilingual, too. One menu here offers Bratapfel, and in Czech Pečené jablko – baked apple. This particular stall is called Böhmerwald hutte, or the Bohemian forest hut.

Now I’m having something of an early Czech Christmas-style snack here – although somewhat different. One of the stalls here is offering deep-fried breaded carp. But not large portions, as served in Czech Christmas meals, but rather tiny little slithers, which are extra crunchy. And I must say it is rather delicious.

Over at a woodcraft stall, I meet a young German lady called Miriam:

“Do you know something about the theatre which is played up there?”

Up at the podium at the top of the hill...

“Yes. I am part of that. We have been performing this theatre for ten years now. And every year I am part of it.”

What kind of performance is it? A Christmas story? 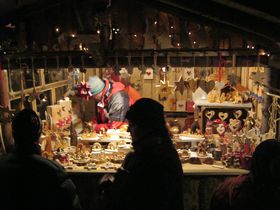 “Yes, there is a cow in it. It is a funny part of the story. But the performance tells the history of a family, who wants to learn something about its family history. So they talk with an old man, and the man tries to explain the smuggling that happened here.”

Because this was a smuggling route for goods hundreds of years ago.

“Yes, and that is what the play is about. And there is a love story, and the old man who explains the history has a Czech mother. And he wants to deal with his past by learning to talk about it.”

And is the play performed in German or Czech?

It is in German, but the woman in the young family is Czech. And there are some other Czech characters. My older sister plays a Czech woman, so she learned Czech.”

One of the stalls here appears to be selling some kind of mulled, not wine, but beer.

The seller explains in German: “Yes, it is a dark beer, with aroma, with spices (Gewürze). Sugar, lemon, aniseed.” Photo: Dominik Jůn In bad German, I ask if it is like mulled wine, but with beer...

“Exactly. Not so much alcohol, and not so sweet.”

Some time later that evening, we are re-boarding our coach back to the Czech Republic, to Plzeň. I should mention that the hot beer was very tasty – quite an unusual mix of flavours, but very nice. So that was the Advent in the Forest, Advent im Wald, Advent v lese...