A history of Czechoslovak industry in seven objects

To commemorate Czechoslovakia’s famous industrial prowess the National Technical Museum in Prague is currently holding an exhibition titled ‘Made in Czechoslovakia - the Industry that Ruled the World’. I decided to take a closer look at the exhibition asking director Hynek Stříteský to pick out a series of objects he believes represent the state’s industrial achievements best. 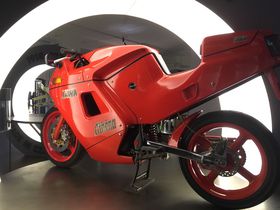 Jawa Athena Motorcycle, Photo: Tom McEnchroe When Czechoslovakia was proclaimed an independent state in 1918, it had the great fortune of inheriting around two-thirds of Austria-Hungary’s industry. This catapulted the new republic into the top ten world economies. Whereas Austria struggled immediately after the war, with Vienna suffering a major outflow of its population, her northern neighbour was blessed both by a strong industrial base and a generation of businessmen to use it.

Czechoslovakia’s industrial importance would be intertwined with the state’s fate throughout its history, sometimes for the better, sometimes for worse. Hitler and later Stalin were both aware of the country’s resources and military industry making sure it served Germany and the Soviet Union well.

Yet apart from guns, coal and uranium, Czechoslovakia also produced advanced machines and technologically sophisticated items such as television sets, developed by leading scientists. To celebrate this great industrial heritage, the National Technical Museum, located near Prague’s Letná park, has launched an exhibition called ‘Made in Czechoslovakia - the Industry that Ruled the World’. Its exhibits have been specially selected to map out the country’s industrial history.

The director of the building’s Electrotechnical and Media Museum, Hynek Stříteský, explained what is on offer.

“This exhibition depicts the development of Czechoslovak industry from between 1918-1992 and visitors can look forward to seeing the products of engineering, the textile industry, transport vehicles, domestic products and more.”

To give us an appetiser for the exhibition, Mr. Stříteský, picked out seven objects which he believes are symbolic of Czechoslovakia’s industrial past. First, in line was an example of high-tech electronics.

“Here we can see an experimental black and white television set from 1939, by Jaroslav Šafránek. Mr. Šafránek was one of the first experimental television broadcasters, starting in the early 1930s. At the time, experiments with this new medium were only taking place in five countries – German, Great Britain, America, the USSR and Czechoslovakia. Thankfully, his fully electronic experimental television set has been preserved, but Mr. Šafránek’s experiments were terminated at the start of the Second World War. Had this not taken place, Czechoslovakia would have been one of the first countries in the world to have television broadcasts.” 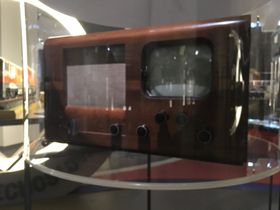 Šafránek's Television from 1939, Photo: Tom McEnchroe The German occupation did not kill off the Czechoslovak television industry completely however. As Mr. Stříteský points out with the next item, again a television, Czech scientists would build upon German research during the war that would result in an important step in European television production in the late 1940s.

“This television system is a piece of equipment unique around the world. It documents the construction prowess of Czechoslovak engineers in the 1940s. The equipment is highly likely to have been the first to use the 625 line system in Europe.”

What makes the 625 line system so important?

“Because this system is still used today.”

Apart from early breakthroughs in electronics, the young state was also famous for another component of its industry – armaments. Those interested in war machines are likely to spend time inspecting the museum’s early tankette as well as a variety of fighter planes. Mr. Stříteský however, eagerly shows me a much smaller weapon, a machine gun known as the ZB-26. First developed by the Brno based armaments company Zbrojovka, it served as the core design upon which the allied ‘BREN’ was developed.

“This is the machine gun ZB-26, which was later modified by its initial designer Zbrojovka Brno [Brno Armoury] and British technicians. Produced during the Second World War in Enfield, the site of the British Royal Small Arms Factory, where it earned the name BREN (Brno-Enfield). It was used widely during the conflict.

“The production programme of Zbrojovka Brno was very wide. It also included passenger cars for example. In the mid-1930s Zbrojovka started the production of Remmington-Zeta typewritters and five years later commenced its own research in the area. The result was the famous Consul typewriter, with 40.000 pieces a year being produced in the late 1950s.

“Furthermore, towards the end of the 1940s, the company was made responsible for producing kitchen equipment as well.”

Another thick thread that runs throughout Czechoslovakia’s industrial history was the manufacture of transport vehicles. Apart from the world famous automobile industry, this included locomotives, trams and aircraft. Mr. Stříteský provides another influential example. 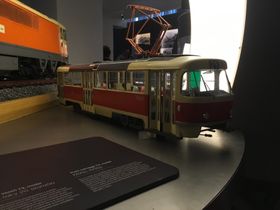 T-3 Tram, Photo: Tom McEnchroe “Here we can see an example of the Jawa 250/353 motorcycle from the era of the 1950s and 1960s. Bikes like these belonged to some of the country’s most successful export products. Especially popular during this era were the so called ‘national class’ motorcycles, nicknamed ‘kývačka’, or ‘Rocky’ in English. This motorbike possessed extremely good parameters for its time, which ensured that it was also popular in more demanding markets.”

So even in the west for example?

While not everyone had a chance to own a Jawa 250 during its glory days, another type of vehicle famous for its design has quite likely transported nearly every large city dweller in the country. Mr Stříteský explains.

“It is quite common to see the T-3 tram in Prague’s streets, but we can also come across it in many other cities of the world. Visitors to our museum can investigate it more deeply through our model here. The tram represents the product upon which Czechoslovakia’s reputation of being the world’s largest tram producer was built. What is also remarkable is the shape of the body, noticeable for its fiberglass nose, designed by František Kardous. The interior is also highly praised for its aesthetically and ergonomically exceptional fiberglass seats.”

Yet as the weekly Czechoslovak film newsreels continued to focus on the positives, not all was rosy for Czechoslovak industry during the 20th century. Roughly around the time that the first T3’s were being exported to other socialist countries, a real decline in Czechoslovakia’s industrial competitiveness became increasingly noticeable.

“Production of certain products was hindered, if not totally prevented, by a lack of certain products available only in the west. The lack of materials and technologies became increasingly apparent in most sectors. Researchers, construction engineers, technicians and designers tried to maintain a reasonable standard of new products intended for the domestic market. However in the case of products intended for foreign markets it was only their courage and inventiveness that let them overcome material and technological barriers.” 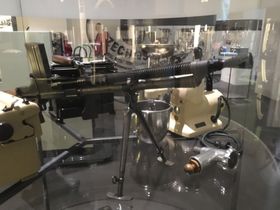 ZB-26, Photo: Tom McEnchroe Historian Peter Zeman, has studied the communist State Security’s economic counterintelligence section, which was tasked with protecting the country’s industry from external as well as internal espionage. He says that in order to prevent suspected saboteurs, accomplished scientists and engineers were often removed from important positions.

“People who wanted to try and change things were often removed from leading positions in industrial enterprises, because they were marked out as ‘rightist’ elements, unreliable, or even as individuals directly hostile to the state. The whole economic system in the 1970s and 1980s was centred around ‘keeping to the plan’, no matter whether it was successful or not. No one wanted to stand out. This undermined any sort of activity and the development of the Czechoslovak economy in the 1970s and particularly in the 1980s reflected this fact."

The economic counterintelligence section’s documents reveal the impact this lack of initiative had both on production and quality, Mr. Zeman gives an example.

“During my research I ran into a case where a fridge producer called Calex, from Zlaté Moravce in southern Slovakia, whose percentage of defective products was 28 percent, in other words, nearly a third of its products. We also have to realise that the socialist customer had much lower expectations regarding quality than his western counterpart, yet still they were getting complaints for nearly 30 percent of their products. This would have driven any normal business bust.”

Czechoslovakia as a unified state never got the chance to recover from the hit its industry received through the rigid communist administration system. It disappeared less than four years after the revolution. Nevertheless there were already attempts immediately after the revolution to come up with products that would restore the reputation of the phrase ‘Made in Czechoslovakia’ and Mr. Stříteský believes one of the exhibits personifies them.

The National Technical Museum’s exhibition ‘Made in Czechoslovakia - the Industry that Ruled the World’ will be open to visitors until September 2019.

“We come to the last of the exhibits that I believe are particularly symbolic of Czechoslovakia’s industrial story. It is the motorcycle Jawa Athena from 1991. Since the second half of the 1960s the technological standards of Czechoslovak motorcycle production were in gradual decline. Nevertheless, the country continued to belong to one of the major motorcycle producers in the world. The social changes after 1989 brought hope of a change for the better. Jawa undertook a joint collaboration with designer Vaclav Král, whose result, Athena, we can see here. However, the object on display here ended up being the only prototype being built.” 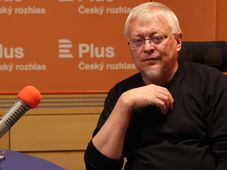 A century of Czech independence - according to Pavel Kosatík

As the end of 2018 draws near, Czechs are reflecting on the century of their independent state. All years ending in “8” have a special…