Bikram Yoga is becoming more and more popular in Prague

Bikram Yoga, practised in a room heated to 42 degrees Celsius, is one of the most intensive forms of exercise. Sure to make you sweat, this form of physical yoga is not for everyone, but at the Bikram Yoga studio in Prague, the classroom is at capacity most of the time. Its director Tereza Bonnet-Šenková talks about what the practise entails and what the benefits of Bikram Yoga are.

Breathing exercises are a crucial part of all classes that are held at the Bikram Yoga studio in Prague. The director of the colorful and clean cut studio is Tereza Bonnet-Šenková a one-time professional dancer at Paris’ famous Moulin Rouge.

“Bikram Yoga is one of the new schools of Hatha Yoga, which is physical yoga. It works your body very intensely from the inside out, from the bones to the skin. What is typical for this kind of Yoga is that it is practiced in a room heated to 42 degrees Celsius or 105 degrees Fahrenheit. That means that you give your body a very intensive workout.”

Bikram Yoga compromises a series of 26 postures that are repeated two times each, and two breathing exercises, peppered with the instructor’s directions which range from encouragement to outright commands keeping everyone in pace.

The specific series of postures was designed by Bikram Choudhury, an Indian yogi who lives in Los Angeles, and is based on the Hatha yoga series, which compromises 86 postures.

Along with the intense physical workout, Bikram is also supposed to have a mental effect on practitioners. Proponents claim that the practice enhances will-power, discipline and relieves stress.

Unlike many others who seek these benefits, Mrs. Bonnet-Šenková says she had a completely different reason for taking up Bikram Yoga and eventually becoming an instructor herself.

“It is true, I wasn’t looking for love and peace of mind, I was a dancer before. I was ruining my body like all dancers of the world. I had a serious hip problem and I had to have surgery because of a broken cartilage. My choreographer, who I used to work with in Paris, brought me to my first class of Bikram Yoga. She told me it would be a fantastic way to build muscle after the surgery.”

After experiencing the benefits of Bikram Yoga first-hand, Mrs. Bonnet-Šenková didn’t think twice about accepting an offer by the studio where she exercised to take Bikram Choudhury’s 9 week class in Los Angeles.

“Once I survived the 9 weeks with Bikram in LA, a very intense experience, I went back to Paris and started teaching Bikram Yoga there. I had this idea in my mnd that it wouldn’t be bad to bring this to Prague, because it didn’t exist here.”

Bikram Yoga Prague offers classes in both Czech and English, thought most members are Czech.

The fact that teacher training, which costs upward of 9000 dollars, is only available at Bikram’s school in L.A. and is compulsory for all certified Bikram instructors, because the guru has trademarked the series, has lead some members of the yoga community to accuse the guru of having commercialized the practice. Some even call Bikram Yoga the McDonald’s version of yoga because it is the same around the world. Mrs. Bonnet- Šenková considers this criticism unjustified.

“I think the only thing that Bikram tried to do, and he always says that he didn’t steal yoga for himself, is that he merely took 26 postures out of the 84 posture series of Hatha yoga, which can be found around the world, and put them in a special order. It’s like a form of choreography. If you take certain steps, then you sign it with your name, like Balanchine did, coining the term ballet. And Bikram did the same thing. He said this is the Bikram Yoga series and he trademarked it.”

Bikram Yoga, because it is practiced in a hot and humid room, is not for the faint of heart- its inceptor Bikram Choudhury sometimes refers to the classroom as a “torture chamber,” but is quick to add that the heat actually makes it easier for the body to perform the exercises because it makes the muscles more flexible. Despite the heat, Bikram Yoga is not that different from conventional Hatha yoga, says Mrs. Bonnet– Šenková.

“There is no difference. It is physical yoga. It is Hatha yoga- which means it’s preparation for the mental kind of yoga, Raja yoga. Beginners can do it. And guys, don’t be scared of the heat, because if you practice yoga in India, it will be warm, hot and humid. We kind of simulate the same conditions as there are in India, so that’s why Bikram always says he brought the Indian yoga to the Western world. He didn’t bring air-conditioning, because it’s just not worth doing it in that kind of environment and could even lead to injuries.”

Those who practice Bikram regularly praise its health benefits and the feeling of collective energy in the room, since all exercises, including the breathing, are done in sync. Barbora Hamoušová, a teacher of management psychology at the Prague hotel management school, shares her experience.

“I decided to try it. I visited the first class and it was very easy, the second class was very hard.But then it started to be very entertaining and it helped me with my health problems and it also helped me cope with stress.”

Even though most students are female, there are some males who attend the class, though Mrs. Bonnet-Šenková says they don’t always dress appropriately (because of the acrobatic nature of the postures, clothing that fits snug on the body is considered best).

“Some men who come to class wear loose shorts, and then I really make sure that I stand on the podium and don’t walk in between my students, because there are some interesting sights.”

Bikram Yoga is also considered an excellent way of loosing weight, burning between 350 and 1000 calories per session. 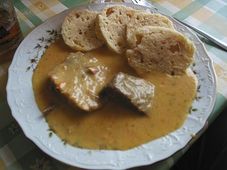