Nine Burmese families are now making a life for themselves in the Czech Republic. One father explained how he fled his country after coming under suspicion from the ruling military regime of having helped rebels. The 43 Burmese refugees, from the Cin ethnic group, are the first to be offered asylum in the Czech Republic under a project organised with the United Nations. Another group should follow soon. Director of the Burma Centre in Prague, Sabe Amthor Soe, has been closely involved in the project and helping families settle in. I asked her first of all who the refugees are and why they fled their homeland. 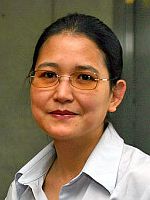 Sabe Amthor Soe, photo: Alžběta Švarcová, Czech Radio The families that have come to the Czech Republic, how did they get out of Burma and where did they go first of all?

“In fact the Burmese that leave Burma often go to neighbouring country because this is the first destination they can reach. The refugees that came to the Czech Republic left from Burma to Malaysia.”

Many of these people were waiting a long time before they could find a host country like the Czech Republic?

“Yes, some of the people have to wait up to 10 years. There are a lot of cases where children that went into the refugee camps never visited a school until they were resettled in another host country.”

When they were told they were coming to the Czech Republic did they have much of an idea what to expect?

“As far as I am informed, the refugees selected to be resettled in the Czech Republic were provided with a kind of short course for orientation about the Czech Republic and Czech culture and the conditions of life in the Czech Republic. I would say that this was very brief and very little and for people who have never experienced similar things. Inside Burma and Malaysia I assume they did not have any proper idea what was ahead of them. When they arrived in the Czech Republic they were accommodated in a facility run by the Ministry of the Interior for eight months and they learnt the Czech language and at the same time were informed about the daily routines of the Czech people.”

And where are most of the Czech families now, are they in one group or are they dispersed a bit? 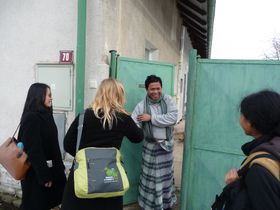 Sabe Amthor Soe visits the Burmese family, photo: Milena Štráfeldová “They were not able to stay in one place. The refugee families were accommodated in so-called integration flats owned by local councils. These flats are very rare in the Czech Republic and it was not possible to accommodate them in one town or region. Nevertheless, the ministry tried its best to accommodate them in one region so most of them are in south Moravia or Vysočina and only one family was left in Bohemia, close to Poděbrady.”

What have been the biggest problems for these families?

“There are a series of problems because of the big differences in their social and cultural background and, of course, Burmese people are used to eating rice on a daily basis but here rice is quite expensive. So their dietary habits are not very economical for the Czech conditions. The second thing is the weather. They do not have experience of this kind of weather. When they arrived during the winter months it has been quite tough for them how to wear socks and proper shoes when they go out. Another thing is the cultural difference. Of course, in Burma foreigners are still treated as guests. Here the situation is a bit different. Czech society is not very familiar with foreign cultures and in particular why these refugees ended up in this country and why we have to give them some help.”

Have any of them succeeded in getting jobs or integrating in that way?

“Most refugees are now working. In cooperation with labour offices they got some subsidies to employ refugees even though their language and other professional knowledge is not yet sufficient to get employment. So most of these people are now working. Of course, the question is how they will continue once these subsidies will finish.”

And are the children adapting better than the parents?

“Children are much faster learners than parents. As far as the language goes, the smaller they are the better. These smaller children are already very capable in communicating in the Czech language. They of course had to learn a lot of new things like dietary habits and how to eat with other students in school because they had never experienced a European dish or in which order to eat it. So, for example, the small children were eating fruit dumplings together with potato soup and the teachers were totally shocked. So these are things that the children had to learn.” 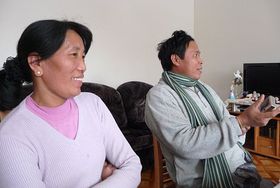 “Well, it will depend on them. It will be definitely individual. I would hope that some of them could contribute to the recovery process of Burma when it is free and democratic. As far as I know, they all miss Burma. The people all miss their friends and relatives, their food, country and homes. I am quite sure some of them will definitely want to return. But the most important thing is how people use their present stay in the Czech Republic where they are free and they can learn more practically what democracy means.”