Cardinal Miloslav Vlk: From window-cleaner to Archbishop of Prague

The Czech Republic has lost one of its leading church dignitaries. Cardinal Miloslav Vlk, former head of the Czech Roman Catholic Church, succumbed to cancer at the age of 84. He will be remembered for his unwavering faith, his bravery during the communist years and his utter dedication to every office he held, be it a pastor in an isolated mountain parish or Archbishop of Prague. In a special in-depth interview for Czech Radio Cardinal Vlk traced his path in life, sharing his innermost thoughts and cherished memories with listeners. In the second part of the interview he talks about the tumultuous changes that took him from being a window cleaner to the head of the Czech Roman Catholic Church. 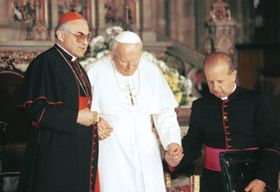 Miloslav Vlk, Pope John Paul II, photo: CTK During the normalization period the communist regime clamped down on the clergy. Miloslav Vlk was sent from one small isolated parish to another, being forced to leave every time it became obvious that the locals learnt to trust him and respected his advice more than that of the Communist party bosses in local government. He says the fact that he grew up on a farm enabled him to connect quickly with the simple folk, understand their problems and win their trust. Eventually he was sent to a bigger town, Rožmitál pod Třemšínem, where he hoped to be less visible to the Communist authorities. He started working with children whose parents he could persuade to take them to church. Once a month he celebrated a mass especially suited to a young audience and once more he quickly won the trust of the parish. In 1978, just ten years after he was ordained a priest, the Communist authorities meted out the harshest punishment – they revoked his authorization to perform pastoral activities. Miloslav Vlk later admitted this was a bad blow. He recalled the last mass at the local church when he was forced to say goodbye.

“It was very tough. I never had a problem speaking from the pulpit but during this last mass I had to hold onto the pulpit fast because I was shaking with emotion and my knees were weak. The parish fought the decision tooth and nail, risking the wrath of the Communist authorities. They wrote protest letters to the culture ministry and to the president. The Communist party sent out delegates from Prague to talk them out of their protests but they stood firm. The show of solidarity only added fuel to the fire because it was obvious that here was a parish that stood united behind its priest. And the protest letter they sent to the president was later published in the Frankfurter Allgemeine Zeitung and it spread the news about what was happening in Czechoslovakia and how the regime dealt with priests."

“I never had a problem speaking from the pulpit but during this last mass I had to hold onto the pulpit fast because I was shaking with emotion and my knees were weak.”

After the Communist regime revoked Miloslav Vlk’s authorization to perform pastoral activities he remained in the town of Rožmitál pod Třemšínem and found work in a small factory.

“I walked in on the first day at 6 am dressed in blue overalls, the same as the other workers, many of whom were my parishioners. I was put to work at a machine and I could tell that the communists kept a close eye on how I would do, but to their amazement I was good at the job right away and worked hard. There was a bit of pride in showing them that, but I soon realized that this arrangement would not do. There were women there working alongside me who would wipe away a tear, in shock to see the priest working away next to them. It was clear that it was rough on the parish to see me there and I realized it would be best to leave the town. So when a new priest came to Rožmitál I departed for Prague in order to let things settle down.”

In Prague Miloslav Vlk was once again faced with the dilemma what to do next. He said he wanted to avoid a situation such as that in Rožmitál and looked for work that would give him some freedom of movement. So he became a window-cleaner, cleaning shop windows in the centre of Prague. He says it was the ideal solution. He was outside, felt free and was accessible to people who wanted to speak to him, to ask for spiritual guidance.

“I walked in on the first day at 6 am dressed in blue overalls, the same as the other workers, many of whom were my parishioners.”

“Young people who wanted to come to confession knew where to find me and so I started hearing confessions –there was a worksite in a small side street and there I would hear confessions on a scaffolding. But the secret police soon realized what was happening and it was clear that since my authorization had been revoked I was not allowed to perform any of these activities. So I had to look for a different solution. And I soon found it. The regional court was close by, a huge building with long corridors and groups of people waiting for their court hearing. So that’s where I found a safe haven for hearing confessions - at the regional court in Prague.”

Miloslav Vlk says that paradoxically he felt truly free in those days. I was washing windows, and I thought so what more can they do to me. They could have thrown me in jail, but that was politically unacceptable at the time, so it was clear they had robbed me of what they could and I felt liberated to such an extent that I would take risks and play a cat and mouse game with the secret police, lead them on a wild goose chase and so on.

The 1989 Velvet Revolution that toppled four decades of Communist rule once again radically changed the course of Miloslav Vlk’s life. His pastoral dedication was recognized and in 1990 Pope John Paul made him a bishop. A year later he was appointed Archbishop of Prague. 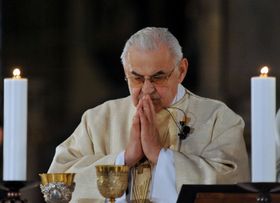 Miloslav Vlk, photo: CTK His main task after the fall of Communism was to gradually fully restore the role of the Czech Roman Catholic Church and heal ties within it which suffered during the four decades of Communist rule. He said one of the sensitive issues that needed to be dealt with was that of priests who had cooperated with the Communist secret police.

“It was our duty to deal with this matter, but I knew well from my own experience how the secret police could threaten people and the kind of pressure they could exert. So in this matter I tended to be generous and I always made an effort to find out how things stood. Because the secret police files published were unreliable. The secret police would often enter the names of those whom they questioned or tried to get on their side but who never helped them or cooperated with them. So even before the screening law came into effect in 1993 I sent all the priests a letter saying if you were implicated in any way, if you were dragged into this secret police machine - come to me and tell me your story so that I can defend you.”

In 1994 Miloslav Vlk was elevated to the rank of cardinal.

“Traditionally every cardinal acts as a patron to a church in Rome, because originally cardinals were priests of big parishes in Rome. And today even cardinals from foreign countries are made patrons of a given church in Rome. And when deciding on what church I should get, Pope John Paul allegedly said let us give him the Church of the Sacred Cross because he bore a cross in his own life, it is symbolic that he should have it. And so that is how I became patron of this basilica. I have a room there where I can sleep when I am in Rome and I am in close contact with the church.“

“Young people who wanted to come to confession knew where to find me. There was a worksite in a small side street and there I would hear confessions on a scaffolding.“

As Archbishop of Prague, Miloslav Vlk turned the Prague Archdiocese into a functioning well-run institution on a high European level. He also defended the Church’s traditional values warning of the danger of trying to change in order to accommodate the society.

“Freedom brought more openness and different views within the Church on how it should fulfill its role in the present day. There is a dilemma of whether to be more modern, more open and go with the times or preserve the identity of the Church. There are certain trends in the Church that advocate change that will bring us in step with society at the cost of losing our identity. We are criticized for rejecting abortions, but this is not an issue over which we can be accommodating, this is a basic principle ‘Thou shalt not kill”. And the same holds for euthanasia. The Church must continue to protect these fundamental principles. We cannot lose our identity on matters such as this”

One of the big headaches the Cardinal Vlk faced in office was the quest to see the property of the Church confiscated by the Communists restituted. The drawn-out talks with the state lasted for over twenty years and Vlk was often accused of being too radical in his demands. An agreement was finally reached after he had retired.

During his 20 years in office as Archbishop of Prague Miloslav Vlk welcomed two pontiffs in the Czech Republic, Pope John Paul II and Pope Benedict XVI. He retired from office in 2010, to be replaced by Cardinal Dominik Duka.

Looking back at his years at the head of the Czech Roman Catholic Church and the changes in Czech society since the fall of Communism Miloslav Vlk had this to say.

“Consumerism is ever stronger and spiritual values which are crucial for the development of an individual and society as a whole, are often forgotten.”

“If I were to look back at the twenty years of freedom we have just experienced, what the Church achieved and what it neglected in that time I would have to say with regret that society developed in a way that we did not fully anticipate. Consumerism is ever stronger and spiritual values which are crucial for the development of an individual and society as a whole, are often forgotten. That is something we were not able to influence. There is an excessive accent on freedom, freedom without any boundaries. People often feel that freedom means doing what you want and they have no respect for others and for basic principles and values. This casts long shadows and is behind terrible acts such shootings at schools which we have even witnessed in this country, bullying of those who are weaker and vulnerable. There is a great deal of egotism around us. This is blatant in politics and public life – a lack of respect for norms, principles, values and even laws. We should have more respect for the rights of others, have more empathy and be more ready to listen and respond to their needs. That is all in the teaching of Christ.” 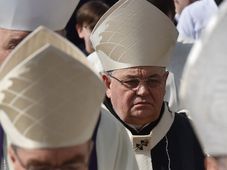 Czech Catholics call for top archbishop to stand down 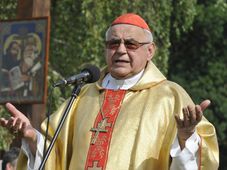 The Czech Republic has lost one of its leading church dignitaries. Cardinal Miloslav Vlk, former head of the Czech Roman Catholic Church,… 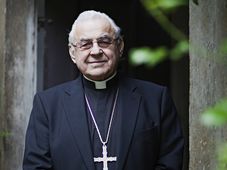 Arrangements are being made for the funeral of Cardinal Miloslav Vlk, the former head of the Czech Roman Catholic Church, who died…