On Wednesday, the Czech Technical University held a press conference as well as a motor show, presenting both the achievements of its Formula Student race teams as well as the cars themselves. The university has been part of the worldwide competition for nearly ten years and its race teams are made up of some of its most successful students. I went to the university in order to find out more about the teams and their vehicles. 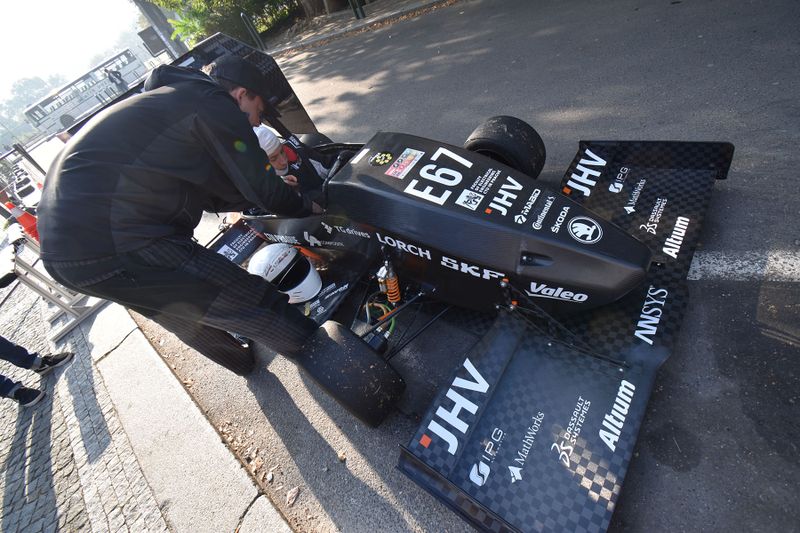 During the 1980s a competition was established by a number US universities, which pitted various student race car teams against each other. These were made up mainly from automotive and motorcycle enthusiasts pursuing engineering degrees. Each team was responsible for creating their own Formula race car and the prototypes then entered a competition where they raced each other to see whose vehicle was the best.

In 1998, this idea was picked up in Europe, where competitions between students from dozens of European universities have taken place at the end of each academic year since then.

The Czech Technical University in Prague joined the competition with its first vehicle in 2009, made by its first team – CTU Cartech. Two years later, the university’s Faculty of Electrical Engineering brought in its own team, eForce FEE Prague Formula. Both now compete in the country with other Czech universities, but also abroad in tournaments ranging from Estonia, Hungary, Spain and more.

On Wednesday, the university held a press conference in which the vehicles as well as the accomplishments of both teams in the past season were presented. Although both placed on podium spots in some tournaments, the eForce team came out on top this year.

Professor Pavel Ripka, who is the Dean of the Faculty of Electrical Engineering, stressed that the work produced by the two teams is the highlight of the university’s engineering capabilities. 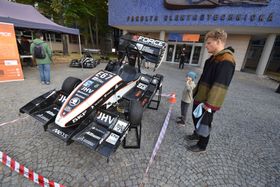 Photo: Ondřej Tomšů “While other teams buy ready-made modules and put them together, our students make all the components more or less from scratch, which also leads them to better understand how these things work. It is starting to show that our race teams are better than our research teams, which we are so proud of. These students have beaten the Massachusetts Institute of Technology (MIT), which our research teams, of course, are still quite far away from. There are other very successful student projects, but the Student Formula teams are the cream of the crop.”

After the main presentation was over, I took the opportunity to speak to the students who presented. Filip Tomasch, is the man responsible for Cartech’s chassis and composite parts, he is just about to finish his Master’s degree in Motor Vehicles and hopes to move on into motorsport oriented production professionally.

I asked him which feature of the car he is most proud of.

"I would say either the customisation of the bar train, mostly the lower part such as the lubrication system and the drive system. Already last year we made changes as part of a big step in this area, but this year we have really made it work very well. Last year we were always making sure it worked properly, but this year it was perfect."

What are you looking to improve the most coming into the next season?

"Mainly the overall understanding and use of vehicle dynamics. Furthermore, changes in suspension, correlation between aerodynamics and tyres, management of proper temperatures and the reliability of the car are also something we want to focus on."

What would you say are the greatest benefits of working on these competitions and the cars for students of the university?

"You get to work with technologies and materials which are not even normally used in the automobile industry in the Czech Republic. For example, we have been using the rapid prototyping of metal parts and topology optimisation since 2014, but the existence and use of this technology only became somewhat of a norm within the industry 2017. You still meet people who are absolutely flabbergasted by the technology. They cannot believe that this exists, while we have been using such technologies for years already.

"You also get to meet thousands of likeminded students, who have the same problems as you every day of the year and you get to meet them and talk with them during the races in the summer."

Another student, Marek Szeles, who headed the successful business group within the university’s other team – eForce, believes that these race car projects can contribute to Czech automobile development in the research and development sphere.

"The students that take part in this project are, in the end, the elite that this university can offer, because they get hands on experience with the most recent technology. For example, one of the founding members of this team went on to work at Škoda to work on an electric drive for their upcoming car. When they showed him their state of the art battery pack, he said: ‘That is nice, but we have already had that on our formula race car two years ago.‘

"So, in many ways, the cars that we build are already ahead of the industry and we test out these technologies on the races under extreme conditions, which would be very costly for the automobile manufacturers to test themselves, because they would have to manufacture large quantities costing a lot of money which we do not have to worry about so much."

"I’ll give a little background first. Every race has 1000 points that are distributed among the teams. 700 of these points are distributed among the dynamic disciplines that involve the car’s performance and racing. The other 300 are distributed among so called, static disciplines. These are made up of the business plan, engineering, design, etc. The business plan itself makes up 75 points in the static disciplines. It may not be much, but it affects how the overall score as well as how the team works, because you have a management component as well there. If you manage the team correctly with few resources you can achieve great successes, whereas if you have loads of cash and but bad management, you will not do very well."

The guys who drive the car, are they professional racers?

"No, they have to be students. They are part of the team and actually build the race cars with us."

If there is a tip you could give to an engineer starting in this competition, what would it be?

"One thing is definitely to focus on the management side as well. It is not just a technical competition. In the end you have to deliver and to be able to do so you have to be well coordinated. The second tip I would give is not to be afraid of making mistakes. They let you move forward and learn, as well as teaching you how to make the best formula possible in the end."

Building a formula race car is, of course, no cheap matter and sponsors need to be continually acquired. The teams and their vehicles therefore travel to various roadshows and exhibitions throughout the year to find new sponsors and bolster their public relations. Loyal sponsors of the team, get a visit to their headquarters, where they can apparently also try to drive some of the models. 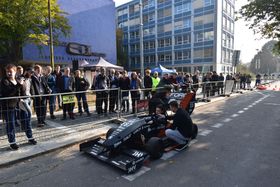 Photo: Ondřej Tomšů As soon as I walked out of the university building, I was met both with an almost spaceship like silent rumble as well as the more familiar roar of a petrol engine, as both the teams’ electric and fuel based formula race cars were presenting themselves to the public.

Next to the racetrack, another Czech Technical University team was showing off their wares. This time though they were motorbikes. I approached a proud looking man who was standing in the motorcycle tent and coordinating his students.

"My name is Petr Bouchner, I am the head of the Department of Vehicle Technology at the CTU in Prague. This team is made up primarily of students from the Faculty of Transportation, but we also have team members from the Faculty of Electrical Engineering and the Faculty of Mechanical Engineering, who contribute to the design and creation of these formula motorcycles. These vehicles were built and raised in the scope of the MotoStudent world competition, whose final event is held in Alcaniz in Spain. I am very proud to say that our electric version of the motorcycle finished ninth in the world overall.“

So this is a separate competition to the Formula race car competition?

"Actually, this is a students competition, a little younger than Formula Student. However, it is compatible with the Moto3 World Championship. So these motorcycles are racing on the real GP circuit. It therefore requires very similar equipment to that of professional motorsport."

Do you have any professional motorcycle teams cooperating with you, or do you hope to get them in the future?

"We hope to get some in the future to help us not only on the motorcycle itself, but also as part of the electro mobility project, to help us in the development of the electric bike. Because it is quite sexy, it is new and we can put a number of new technologies into it. These technologies are also evaluated at the competition. It is not just about racing. That is the cherry on the cake. For a two year period, students have to pass tests, providing research reports to the committee and the final competition is made up of six day tests, of which only the last day contains the race itself."

Standing next to Mr. Bouchner was a student called Přemek Toman, the team leader of the Moto Student Team in Prague - CT Lions. He is also from the Faculty of Transportation and proud of it. He showed me the bike he and his team had made.

"We worked on the whole frame, on the fairings, as you can see. We finished those on the night before the race, laminating them. My part was to bring the bike to life. That means working on the electricity system, the whole wiring. My colleague is the father of the frame, the rear suspension, front suspension, etc."

Is this your final season, or will you be in one next year as well?

"I hope to be in the next team too. Every two years there is a race. So I hope that when the next one comes in 2020, we will do much better."

"To actually finish the race with both bikes. The season before we finished the trainings and the tests but not the race. This year we finished with the electricity bike, but we had to stop in the final race with the petrol powered one. So I hope in the next season we will finish it all without problems."

Whether Mr. Toman succeeds next season we shall have to see. One thing seems certain however. Participating in the Czech Technical University’s project is likely to get him and his team mates ahead in the job race.