Former US ambassador to Prague, William Luers, on what it was like to serve in Communist Czechoslovakia

Former US ambassador to Czechoslovakia William Luers and his wife Wendy recently visited Prague and gave a talk at the American Centre about what it was like to be posted in Communist Czechoslovakia in the 1980s, how they were able to support dissidents such as Václav Havel and how they later helped the country on the road to democracy. I spoke to them after the debate and began by asking the former ambassador what it had been like to serve behind the Iron Curtain. 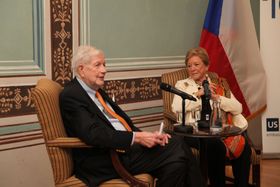 William and Wendy Luers, photo: archive of US embassy in Prague William Luers: “Dark and dreary. Not as oppressive as the Soviet Union, I’d lived in the Soviet Union for many years. Not as scary, but still inaccessible. The government was inaccessible, and I was ambassador to the government, not the people. And so, the strongly negative relationship we had with the Czechoslovak communist government drove us to find these other worlds, which were everywhere in Czechoslovakia… I mean the country itself, the history of the country and particularly the people.”

Was it possible to meet with Czech dissidents without drawing the wrath of the Communist regime upon them?

Wendy Luers: “Well, let me tell my story about that… I went out because the top STB agents were following Bill. Even though they knew I had a human rights background they just had the third rate STB agents following me. So I went and spoke to several of these people. I asked them, “Are we going to get you into too much trouble if we invite you to meet these writers and painters and dramaturgs and others that we are inviting from the United States?” They said, “We are in so much trouble already and besides that, you’ve got whiskey.” They were by far the most interesting people in the country, and we were bringing the most interesting people from our country. It was just a wonderful thrill for both sides to be able to talk to each other, exchange... Then, the other thing that was so interesting was that because life was not very fast here during communism, things went very slowly, talking to Czechs and Slovaks about literature, about a book that they read, about a film that they’d seen, was such an experience for all of us because they saw many layers that we didn’t see because we, as Americans, just keep moving so fast. So that was another aspect of why it was so fascinating for us.”

William Luers: “One story that we didn’t tell – I don’t know if you know who Kurt Vonnegut was, he was a writer who was greatly loved here. He sounds and feels like a Czech writer in a funny way. We went down to Petr Oslzlý’s theater in Ostrava, Goose on a String, and they were doing a Kurt Vonnegut play, specifically to honor Kurt when we took him there, and it was a great evening. The STB, the communist secret police were everywhere, they came early and they had to stay out in front…” 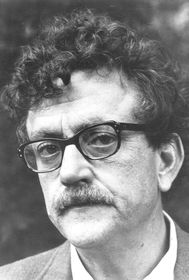 Kurt Vonnegut in 1972, photo: WNET-TV/ PBS - eBay front back, Public Domain Wendy Luers: “…in the freezing cold, it was winter…”

William Luers: “… Then afterwards we went and met some people that Petr had over for a drink at a place nearby, and this one man came up to Kurt and said, shaking, he was quite moved, “It’s because of you that I’m alive.” He believes, and he told Kurt, that Kurt had been one of three writers who’d signed a letter to the Czechoslovak government about him, and he believes that he was released from prison as a result of that letter. Whether that’s true or not, it made Kurt feel very good about himself.”

You became very good friends with Václav Havel, do you have any cherished memories about your time spent together or how you met?

Wendy Luers: “Hundred and hundreds of memories. The first time we met him was when he came to the residence for a very large reception. We had met Olga before - we didn’t talk enough today about Olga. Olga was a force of nature, an extraordinary woman who was so important to Vaclav and to his whole time in prison… and of course “Letters to Olga” is something that is well-known around the world. But as Bill said today, it was perfectly obvious that this not very tall man was suddenly surrounded by people. There was a natural leadership, a natural kind of magnetism that he had. We saw him very often, and went to Hrádeček, and it was incredibly important to us to know him and to continue to know him. When I started Charter 77 in New York, of course it was because of Václav. We gave his inaugural dinner on December 28th 1989 by chance, because when we made the reservation and sent out the invitations, not even he knew that he was going to be president. So it was life transforming for us. We organized his trip to New York in February, when he spoke to the joint sessions of Congress with Madeline Albright organizing that in Washington DC and then in New York.”

William Luers: “One of the memories that is so vivid is that I was with him during his visits in New York and it was one after the other, everyone wanted to see Václav. We went to see the Cardinal, we went to see Amnesty International, we went to the Metropolitan Museum, we went to see a Jewish group, and all day long he was visiting. One day we were in the car and he said in Czech “Why is Bill having me talk everywhere, I’m not a talker, I’m a writer, but I have to speak everywhere I go,” and, of course, he didn’t realize I understood him and I laughed at him. But people were dying to hear his voice; this was a very powerful period for most Americans and he was the most powerful of the figures from this new world. And, of course, he had to talk, and he didn‘t want to do it.” Václav Havel in 1992, photo: Czech Television Wendy Luers: “And he also didn’t like everyone asking him to give speeches because he always felt he had to write his own speeches. One of the funny stories about New York was, and remember he’d only been there once in 1968, he was coming down 5th Avenue towards the Metropolitan Museum. He was in a limousine with darkened windows, and he said “I can’t stand this; I’ve got to get out of this car.” So he got out of the car and the diplomatic service, the secret service who were taking him and all had those things hanging out of their ears, were talking and saying “we have no control over this president.”

William Luers: “He did the same thing when we were driving on Park Avenue, he said “I want to go to the Waldorf Astoria, “so we stopped the cars and he got out on the street, and the diplomatic security people were just going crazy.”

Your term ended here in 1986, could you feel a change coming, and did you fear violence?

William Luers: “I wrote some things after I left, in fact I did an article in Newsweek in 1987 called “The End of Communism.” I believed, contrary to everything I had ever experienced, that this thing was eroding, and part of this was Gorbachev, and part of it was the economic stagnation of these countries. I think I was one of the earlier people to call this and I think my experience here had helped me get there.”

Wendy Luers: “The part for me that was so interesting and important was the interwar period between the two world wars. That there was a memory of democracy, there was a memory of really fantastic economic accomplishments from the older generation. So even though people had their heads down, they were afraid, they didn’t want to do anything, there was this saying “if you’re not stealing from the State, you’re stealing from your family” and all that, there still was a pride of nation that existed and came from that interwar period. People would tell us about that period all the time, and so it was different than in other countries, certainly the Soviet Union.” 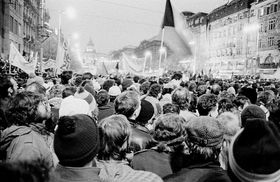 William Luers: “We were sort of here in the sense that we had been here that summer and we were in touch during that period of the revolution quite constantly. Staying with us for that whole month after the 17th was Zdenek Urbanek, the great translator of Shakespeare and one of Havel’s closest pals. Of course, even if we had been here, we wouldn’t have had a role, it might have been interesting to see it, but watching and speaking about it publically was more important.”

Wendy Luers: “But we did give Havel’s inaugural dinner and we did participate with him in this amazing inauguration of his. And when we joined the Charter 77 Foundation in New York and in Prague it was because Havel asked us if we would help with the democratization process. So we had an office here, an office in Bratislava, an office in New York and we raised and spent 11 million dollars trying to help with the development of civil society and NGOs. We brought 500 young people, whom we called the Masaryk Fellows, here. They came every summer, paid for by themselves, lived with Czech families and taught English.”

William Luers: “Because when we asked Václav what do you need most …” 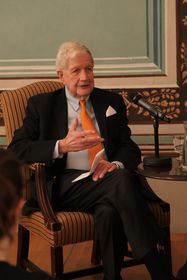 William Luers, photo: archive of US embassy in Prague Wendy Luers: “Yes, he said - we need to speak English. There were no books, there were no computers, there was nothing we could use and we worked on this with Charles University. So it has been an enormous part of our lives.”

You have clearly developed a love for Prague and the Czech Republic – what is it about the country and the people that you love most?

William Luers: “I guess it is the humour with which they deal with their lives, their condition, their problems. Czechs will always tell you what their problems are, but they will always do it in a funny way. That’s unique. There is no society that I know of that has the ability to turn a really dreadful situation into an amusing moment.”

William Luers: “And we got to know this side of the Czech –or then Czech and Slovak- people well.”