From cream to pig’s blood: How cooking evolved during the Protectorate

Whether it is gluten-free, paleo, vegan or just low-carb, the modern world offers special diets for the most selective consumers. But how does one eat when all but the most basic foodstuffs are cut off? That was the question that Czechs living during the Protectorate era between 1939 and 1945 had to ask themselves nearly every day. 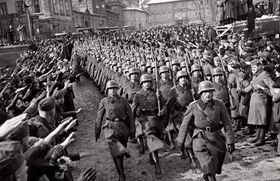 Nazi troops occupied remaining Czech parts of Czechoslovakia, photo: Public Domain The era of the Protectorate of Bohemia and Moravia belongs to the darkest and toughest periods in Czech history. After Nazi troops occupied what remained of Czechoslovakia in March 1939, the local population had to count on night-time visits by the Gestapo and brutal crackdowns on even the slightest dissent.

Aside from that, however, soon after the Protectorate was established, a worldwide conflict erupted, leaving the Czech lands cut off from the outside world through blockades and enduring the deprivations of war.

However, historian Dr. Martin Franc, who has also dabbled into the history of Czech culinary culture, says that it was not as bad as we may think.

Speaking at a recent event recreating some of the dishes common during the Protectorate era, Dr. Franc said Czechs could not be picky. But neither did they starve and in the early months of occupation the Protectorate diet was actually more liberal than in the Reich, he says. 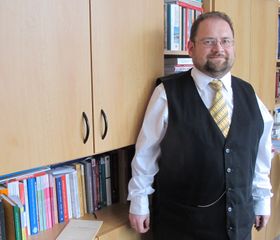 Martin Franc, photo: Till Janzer “If I were to describe the notable periods in the Protectorate era, they would be a first phase in March to September 1939 immediately following the first establishment of the Protectorate. There is a famous image from this time of Nazi soldiers in Prague stuffing their faces with cream cakes. Cream and custard had not been used in Germany since earlier in the 1930s, so they saw it as a luxury.

“After the outbreak of war, however, conditions quickly started to become more uniform with those in Germany. A relatively tough system was then implemented, which remained roughly the same until the end of the war. It should be said that gradually rations became scarcer, especially in the late phase of 1944 to 1945. However, these were largely limitations to foodstuffs available outside of the ration coupon system and to their quality. The quantity of basic supplies available through coupons remained more or less the same.” 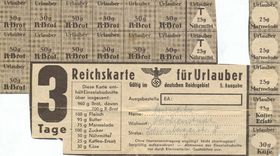 Ration cards in Germany, photo: dontworry, Wikimedia Commons, Public Domain Unlike during the First World War, where severe food shortages were common in Austria-Hungary in the last years of the conflict, the Germans had learnt their lesson going into World War Two and brought in a structured monthly coupon system that relied on maintaining a steady supply of basic nourishment. Their alternative provisions, the so-called “ersatz” food, which had gained notoriety during the First World War for such desperate creativity as lichen for flour that turned bread green, were much more systematically thought out. In fact, according to Dr. Franc, the search for replacements led to more reliance on fish.

“The scarcity mainly surrounded animal products, things such as meat, fats and eggs. Naturally, the availability of products shipped in from overseas was hit particularly hard as well, due to the naval blockade. Real coffee, for example, became virtually unknown to people living here. 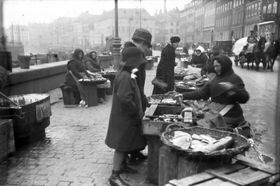 Illustrative photo: Bundesarchiv, Bild 102-13007 / CC-BY-SA “On the other hand, locally grown vegetables, especially those that were easiest to grow, were still relatively plentiful. There was also still a solid amount of potatoes and even when it comes to bread, you cannot say there was a grave shortage. Interestingly, what was also relatively plentiful was the supply of fish. Luxurious restaurants, which were of course particularly impacted by the blockade, would make up for the lack of ingredients by offering a large assortment of fish, caught in the North Sea.

“It should be noted however, that the relatively wide availability of fish on the Czech market, did not lead to their popularity. In fact, research undertaken in 1950 showed that children at the time despised fish, although this also had a lot to do with the forced ingestion of fish oil.”

Roman Vaněk, a popular Czech chef and public figure, who challenged himself at the recent event to cook for the public using only Protectorate-era supplies and cookbooks, says that just because we are used to luxury today, doesn’t mean that cooks could not be inventive then. 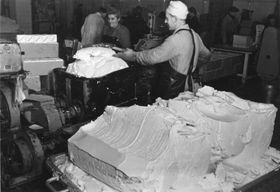 Margarine factory in Germany, photo: Bittner, Bundesarchiv, Bild 183-R68085 / CC-BY-SA 3.0 “Gastronomy, just as politics, goes through its ‘-isms’. There is always some sort of ‘-ism’ that is the current fad, but disappears again relatively quickly and everything goes back to its origins. The more extreme the fad, the quicker it disappears.

“Of course cooking became more logical and was undertaken with the goal of wasting as little as possible. But there were few extremes during the Protectorate era. It’s completely normal, average culinary art that does not go out of its way like today’s superfood crazes and such.

“It’s a sort of comfort food, for lack of a better name. Because there is a war going on does not mean that you have to eat horrible meals. Whether I use margarine instead of butter in some types of recipes is not relevant.”

Apart from depleted shelves in stores, Dr. Franc says that Czechs also had to count on revised menus at their local restaurants, which highlighted the division between occupier and subject in the dishes either nationality was allowed to order.

World War II ration stamps for meat, bread, potatoes and milk from Protectorate of Bohemia and Moravia, photo: Miaow Miaow, Wikimedia Commons, Public Domain “There were wide differences. Rations for Germans were considerably larger. But there were also noticeable differences in restaurants where there were sometimes specific foods for both nationalities. For example, the menu of the Na Pernštýně restaurant in Pardubice, Germans could enjoy lamb, while Czechs had to suffice with tomato sauce and dumplings.“

While Czech gourmets had to suffice with drab choices on their favourite restaurant’s menu, thanks to the importance of Czechoslovak military industry for the war effort, workers could actually look forward to increased rations in special factory cantinas, a system that was retained for years after the war.

“Those workers that were heavily involved in war production were privileged. The rationing system took them into account by supplying them with rations that were considerably larger than what was the basic supply. 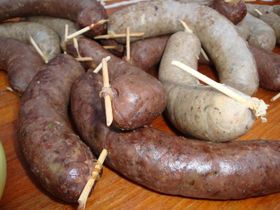 Blood sausages (left), photo: Jaroslava Indrová, Czech Radio “Furthermore, the so called factory-kitchen system was widely developed during the Protectorate era. Workers in factories important to the war effort received special allocations that went to the factory-kitchens and ensured they had a considerably better diet than the majority of the population. This system endured after the war and went on until food rationing was abolished in 1953.”

Aside from rations there were also other ways to secure food. Those living in the countryside could for example use pigs’ blood, which was not rationed, and make blood sausage. However, it should be said that its quality was equivalent to the times, with meat often substituted by bread. Contacts with someone in the countryside or in the supply chain were very useful, but also dangerous says Dr. Franc.

“As far as the black market is concerned, it was smaller than in the First World War, because being involved in it became considerably more dangerous. It did of course exist, however, and offered more or less anything you can imagine, but for prices which were completely unaffordable for the average citizen. The greatest interest seems to have been in cigarettes and lard. Not coffee because there really wasn’t any, but it was possible to cheat the system when it came to lard deliveries.” 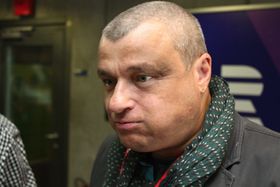 “I was just talking to a Moravian lady who lived through the era and she says that the most important supply was pork fat. That it was treated like gold, because it was used in more or less anything.”

While farmers were generally more likely to be better off, due to the fact that they were part of the production cycle, after the ascension of Reinhard Heydrich to the leadership of the Protectorate they had to count on visits from the Gestapo which carefully noted down everything they had. But according to some testimonies, these checks were not as tough as during the communist era. 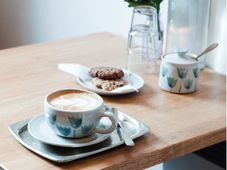 Mamacoffee café chain owner: One must take the time to savour a good cup of coffee 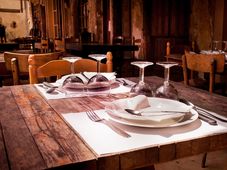 Restaurants in the Czech Republic – which have been shut for a month – will be allowed to reopen in June. However, many are already…