Ice cream making in the suburbs of Brno

What should you do when the heat, the dust, and the stuffiness of the capital all gets too much? Well, for this week’s Panorama, I left Prague in a bid to make my own ice cream. But before you start thinking that I swapped Prague for Pisa, or Palermo or Perugia, well, stop. My journey took me much less far afield. To the outskirts of Brno, to be precise. 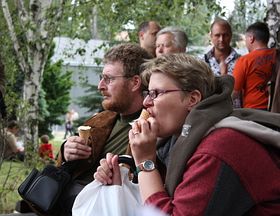 It may not be Italy, but the Czech Republic has a long tradition of ice-cream making, says head of the Czech Association of Confectioners, Drahoslav Hvězda:

As someone raised on Haagen Dazs and Walls ice cream, whose milk teeth took a pounding from all those mini-milk ice-lollies, I wonder what the communist equivalent Mr Hvězda was making was like?

“I have to say that these ice creams were good. The firm which made the raw ingredients was based in Opočno, Eastern Bohemia, and I have to say that whoever used their ingredients, and followed the instructions as they were supposed to, then their ice creams were good, high-quality and low in saturated fat. But of course, there was not so much scope for imagination.”

Mr Hvězda now makes some very unusual flavours of ice-cream indeed, but more on that later when we visit his factory. Back in the calm of his city-centre office, the Czech Republic’s chief confectioner tells me about his competition:

“As far as I know, ice cream is made in over 1,200 different places in the Czech Republic. That isn’t an inconsiderable number of ice-cream manufacturers, but it isn’t too many either. There is still room for more on the market. But a lot of the people currently making ice cream are in small restaurants, in countryside tearooms and so on, and they are not necessarily aware of hygiene rules and so forth when they are making this ice cream.”

Mr Hvězda comes from a long line of ice cream makers, but how did his forebears make the stuff before the age of freezers?

“My grandfather and my father would gather ice in the winter and store it in the basement, which was specially insulated so that the ice would stay frozen for anything up to a year. I remember as a child, my father would bring home 50, 60 kilos of ice at a time, he would chip it into little bits, put it into the ice cream maker, which of course was hand powered, you had to turn it over and over by hand. And that is how he made ice cream, which was then kept cool in a display case packed with blocks of ice. So that is how we did it. It was difficult, yes, but we knew how to do it.”

But what about today? To find out about the way ice cream is made now in the Czech Republic, I visited Mr Hvězda’s factory, which is also his home. My guide was the ice cream maker’s colleague, Irena Čechova:

“These are big freezer boxes, and in each one there is frozen ice-cream, just waiting to go to the customers. A truck or a small lorry comes into this big room and then the ice-cream is loaded directly into the car.”

So is this an ice-cream factory then? Because from the outside it just looks like a house, but inside it is something completely different.

“Upstairs is where Mr Hvězda lives with his family, but here downstairs has been specially adapted for ice-cream making.”

Mr Hvězda’s factory is a vision in stainless steal. At the start of the visit we are given some hospital-like white coats to wear throughout the factory tour. Through a hallway of freezers we come to a room full of whirring machines, and are presented with one of Mr Hvězda’s Czech-er sounding ice creams:

“Poppy-seed ice cream, this is one of Mr Hvězda’s specialities, and then this peanut ice-cream is also one which is not made all that regularly.”

And what do you think of the peanut ice cream? Do you like it?

“Yes I like it, it is my almost favourite.”

Your almost favourite? And what is your absolute favourite?

“Walnut ice-cream, and I also like a really good vanilla.”

There are two big vats at the corner of the room in which molten ice cream mix is pasteurized. Then, the mixture is put into a machine which swirls it round and round:

But didn’t they just say that there is less than ten litres in the machine right now?

“Well, you put nine litres of milk or water, and then with the additional flavours, you end up having more than ten litres of good ice-cream.”

So, we’ve just witnessed a new batch of ice-cream being started off, can you tell me a bit about the process?

“Well, in the machine there is milk or water, depending upon the kind of ice-cream. And then the gentleman just added the ice-cream mixture, which this time I think was peanut-butter again. And now it is going to be mixed together and frozen to a specific temperature.”

And I hear that this machine is cooled down, quite simply, using cold water?

“Yes, the machine heats the water and then the water is just drained away and wasted, which is a shame. It would be good to use it somehow, like for a swimming pool in the garden. That would be nice” 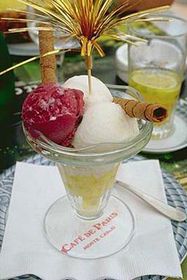 There are shelves of tins full of exotic flavours that Mr Hvězda adds to his ice cream. He brings down one such tin of ice cream concentrate, and two spoons for us to taste:

“This is the whole strawberry mix, which is used for flavouring ice-cream.”

It looks like jam. Oh my gosh, that is very, very tart.

I’ve noticed it gets very hot in there. Not really what you would expect from an ice-cream factory.

“Yes it is from all of the machines, but you would expect there to be cold air, I know. Not to be sweating like that.”

And with that, as well as several further mouthfuls of delicious homemade gelato, my ice cream odyssey came to an end. So it was back to Prague, and onto a diet, for me. 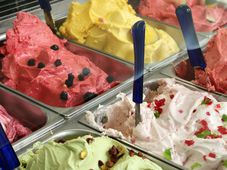 Czech production of ice cream on the rise

The Czech Republic produced over 44 million litres of ice cream last year, which is the highest figure since 2004. Czechs have surpassed… 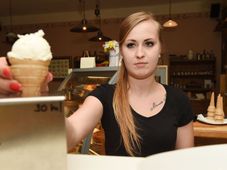 Ice cream made from pungent “tvarůžky” cheese a first 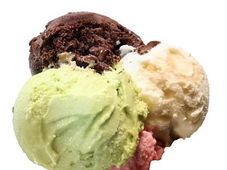 Amidst the sweltering summer, like many Czechs, I began to crave some ice cream. Thankfully, this frozen substance has become something…