The Prague Integration Centre in Žitná street, just a few minutes’ walk from Wenceslas Square, is housed in an inconspicuous-looking building, but inside the place is busy as a beehive. Foreign residents from different parts of the world come here for advice on how to rent a flat, find a job or deal with residence permit problems. 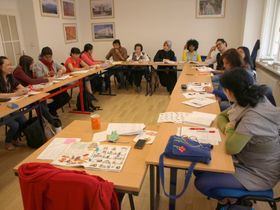 Photo: Archives of the Prague Integration Centre A mixed group assemble for their weekly Czech class - a Russian woman married to a Czech, a worker from Ukraine, a young Mexican girl who moved here after falling in love with Prague and a young mother from China. All have one thing in common –they are building a new life in the Czech Republic and trying to feel at home here. The language barrier is not the only hurdle they face.

“Sometimes I still experience this kind of thing, for instance on a tram, people sometimes look at me as a foreigner. Just the looks, they don’t say anything, but I can feel by the way they look at me that they don’t like me that much.”

“We have a problem getting integrated because most of the people here don’t speak English. In the evening you find people who speak English, but during the daytime it is hard really, because the other side don’t speak too many languages.” 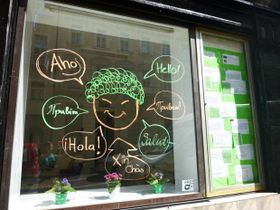 Photo: Archives of the Prague Integration Centre “My name is Laura. I’m from Mexico City. I’ve been here for one year already and I love the country.”

“Once I was buying flowers in a flower shop. I just said I’ll have this, this and this one. And they were not very kind to me. Actually, they were rude to me. I don’t know why –I was just buying flowers. Maybe because they could see I’m from Asia, I don’t know.”

Here immigrants are certain of getting sympathy and help. The integration centre offers not only language training and legal counselling but communication with inter-cultural guides who have experienced the difficulties of integration first hand – and who are there to help newcomers to the Russian, Vietnamese, Arab or Ukrainian community. Most of the centre’s employees are foreigners who remember well the difficulties of starting a new life in foreign country. Alen Kovačevič is one of them: 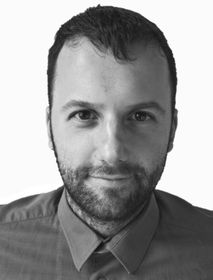 Alen Kovačevič, photo: Archives of the Prague Integration Centre “My name is Alen Kovačevič. I am from Bosnia and Herzegovina and I have been living in this country for almost 24 years – since 1993. I came to the Czech Republic with my parents and sister when there was a civil war in my country.”

And what kind of reception did you get?

“We were lucky. First of all we were lucky to escape from the war unhurt. We escaped first to Belgrade and from Belgrade to the Czech Republic. We had friends here from Sarajevo and they told my parents if you want to start a new life somewhere the Czech Republic is a good choice. I cannot tell you much about negativity. Of course, sometimes you could hear someone say – you are Yugoslavian –go back home – but I wouldn’t say it was the general attitude. I was lucky here, my family was lucky here to get a great response and I have many Czech friends. But of course, once in a while, you get a negative example of how people should not act. It happens to everyone.”

After four decades of closed borders during the communist years, people had a problem opening up to foreigners, or, one should say, some foreigners. According to a poll conducted in 2010 by the CVVM polling agency some were more welcome than others. Czechs gave Slovaks the highest marks on a foreigners’ acceptance index, followed by French, Swedish, British and Austrian and American citizens. On the other hand Russians, Ukrainians, Chinese nationals and people from Muslim countries are likely to get a wary, if not unwelcome, reception.

The centre’s project coordinator, Tereza Třístková, says that some of these prejudices are deeply ingrained and handed down from parents to children, but should disappear in time.

“The young Russians who are living here today are not those who invaded us in 1968.”

“I think that because in the 90s Ukrainians were employed here as cheap labour there is this stigma attached to the whole community, and the same goes for Russians; the young Russians who are living here today are not those who invaded us in 1968, but you will still get someone on a tram mumbling an insult in the direction of a young Russian girl when clearly she had nothing to do with what happened.” 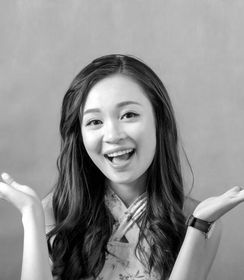 Hai Anh Vu, photo: Archives of the Prague Integration Centre Hai Anh Vu moved here from Vietnam with her parents at the age of 11. She says her best friend is Czech and this is now her new home. Anička – as her Czech friends call her –is now an intercultural guide at the center, helping those who see doors banged shut in their face when looking for work or to rent a flat. She speaks from first-hand experience.

“When I called – and I think I have good Czech so they couldn’t recognize that I am a foreigner –it was OK, but when I turned up I could see the shock on their faces. So yes, we have struggled a lot to find a flat. But on the other hand, I understand why they don’t want to accept foreigners. They are still scared of people they don’t know. They hear a lot of bad things about foreigners on television and they are scared; the landlord is scared his flat will be damaged or they think the job will not be so well done by a foreigner.”

The migrant crisis and the threat of terrorism have only made existing prejudices worse. Although foreigners make up just over 4 percent of the population, a 2014 poll showed that 51 percent of Czechs thought there were too many foreigners living in the country already. 42 percent said the number of foreigners was just about right. Only once percent of respondents said the society should be more multi-cultural.

“When I called, it was OK, but when I turned up I could see the shock on their faces.”

Alen Kovačevič says things are not as bad as polls may suggest.

“Maybe it (integration) looks harder than it actually is. Because many cases, many good examples of how people here live in harmony together are not seen. We –as an integration centre -also get more information about negativities. We get information that some Czech clerks are rude to foreigners or that a doctor or dentist does not want to accept a foreigner as a patient. So those are some of the cases we deal with. But, in general, I would not say that people here are not accepting of migrants. Of course, society is polarised, in the last two or three years people have been talking about a war in the Middle East, so you have many hot-tempered discussions and in some cases negative, backward thinking, but in general, if you ask some Ukrainians, Americans, South Americans what their life here is like they will tell you that life is good and they don’t have many problems with Czechs.” 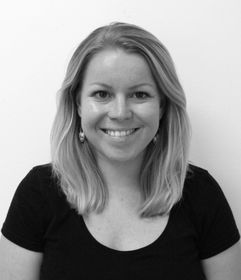 Tereza Třísková, photo: Archives of the Prague Integration Centre Tereza Třístková is also sceptical about the negative picture presented by some of those polls. She says that many Czechs she knows speak cautiously about ‘foreigners as a group’ but will readily tell you that Mr. Vu from Vietnam who runs a mixed goods store on the corner is a very nice guy. She says the atmosphere created by the migrant crisis is not helpful to integration or to the people working hard to promote it.

“We do not talk much about welcoming foreigners, because we are afraid that we will then be labelled as idealists, do-gooders and pro-migrant advocates, because at this time if you befriend foreigners, defend migrants and are active in the intercultural sphere, many fellow Czechs feel that you are lacking in patriotism, that you are not a good enough Czech.”

Alen Kovačevič says that while Czechs are extremely friendly once you get to know them, their initial reserve comes as a shock to many foreigners used to a different temperament.

“Integration is a two-way process and the problem of Czech society is that they expect people who come to the Czech Republic to integrate just like that (snaps fingers) and to feel right at home here. But it does not work that way. You have to open your arms more widely, to help them, grab them, explain many things to make them feel that they are really welcome and that they can count on you. That’s the problem, many foreigners expect much more than they get from the Czechs.” 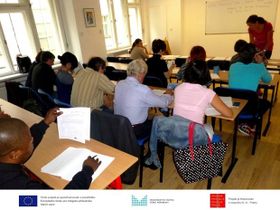 Photo: Archives of the Prague Integration Centre And finally, given the fact that settling into a foreign country can be a painful and lonely process, I asked Alen for a parting word of advice to those currently struggling to make it.

“My advice: never give up. Some things should never get you down. You know, sometimes people feel desperate because they still do not have that visa or residence permit they have been waiting for for two years. But maybe sometimes the situation is not as difficult as it looks. So my advice is never give up, think positive and if you have a problem come to us.” Restoring dignity and hope: a look at people helping refugees in Prague

There are lots of countries in the world that have been hesitant about letting refugees through their borders. The recently re-elected… 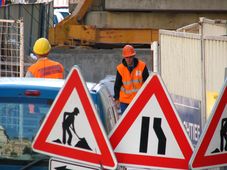 There are presently over 460,000 foreigners living and working in the Czech Republic and tens of thousands more who are here illegally.…