In the days and weeks that followed the end of the Second World War, 31-year-old Josefina Napravilová noticed that there was a job that needed to be done and without any fuss set about doing it. It was a time of chaos – families had been broken up and the lists of missing persons were frighteningly long. Many of those on the lists were children. Through sheer determination and endless detective work, Josefina Napravilová managed to reunite several dozen of these children with their families. For decades, Josefina saw no particular reason to tell people about her achievements, and only now has the full story been coming to light. 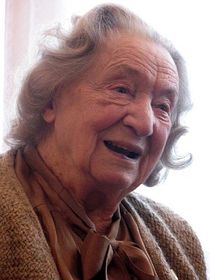 Josefina Napravilová Now 95, Josefina Napravilová is still feisty and articulate, and at a ceremony held in her honour last week, she emanated warmth and energy. She was being given honorary citizenship of the village of Lidice, the community that the Nazis had tried to wipe off the map in June 1942. One of the children she managed to bring home after the war was from the village. 11-year-old Václav Hanf was one of only 17 children from Lidice who were not murdered by the Nazis. He too was a guest of honour at last week’s ceremony.

But it was not just in Lidice that children had been forcibly separated from their parents. In the course of the war the story was often repeated throughout the occupied Czech Lands. Typically, the father would be arrested for involvement in the resistance, often on invented charges. He would be shot and the mother – if she was spared the same fate – would be sent to a concentration camp. The children were left at the mercy of the Nazi authorities, and often their best chance of survival was if they were perceived to conform to Nazi racial stereotypes and were chosen for adoption by German families.

At the end of the war, Czech parents who had survived were drifting back from the camps and in many cases had no idea if their children were still alive. This was how Josefina Napravilová’s work began.

“People were coming from the camps, asking: Where is my child, where is my little girl or my little son? So I was concerned about where are the children in Germany – the lost children, displaced persons. So I started to work for the children and it all started.”

At the time, who were you working for? Was this for the Red Cross?

“No, no! It was voluntary work. I was never paid. I never got one crown for all my work. Not one crown.”

You simply felt this was something you had to do – to help these children?

Josefina could speak several languages, and one of those who had noticed her linguistic and organizational skills was the Swedish consul in Prague. When 15 Czech girls from the Ravensbrück concentration camp turned up in Sweden, he helped to arrange for Josefina to be sent over to bring them home. Josefina’s detective work began. In the case of the girls in Sweden, finding their relatives was fairly straightforward, but the process was infinitely more difficult with children who had been adopted into German families. The Nazis had deliberately tried to wipe out their Czech past.

And when German cities began to be bombed in the second half of the war, entire schools were evacuated to the country, making Josefina’s work after the war still more complicated.

“For instance, from Berlin they were moved south to Bavaria, whole classes, complete with the teacher. So I was visiting classes, looking for Czech children.”

You actually had to travel around Germany looking for children?

Josefina travelled the length and breadth of Germany, following any kind of lead she could find. Once she arrived at a school, she would do some simple tests, to see if any children reacted to Czech words.

“I started by asking them: Do you know what ‘maminka’ [mummy] means, or ‘dědeček’ [granddad] or ‘pejsek’ [doggy] or ‘kočička’ [kitty]? And if the child reacted I knew he or she had Czech roots. So I started to trace them, and brought the children home.”

And how many children did you manage to find altogether?

In the case of Václav Hanf from Lidice, Josefina was helped by the fact that his sisters had also survived and had already returned home. All that his sister Anna could say about Václav’s fate was that she thought he had been taken to Austria. Josefina’s detective work took her to a camp for displaced children near Salzburg. Václav, who by that time was nearly 11, had already told the people in charge of the camp that he was Czech, but he had no documents to prove it. One day, he was summoned by the officer in charge.

“He put two photographs on the table, and said: Tell me, do you recognize any of these people? I couldn’t believe my eyes, and said: Yes, that’s me, at school with the other boys and girls. And in that picture on the right, that’s my mum and dad, my parents. What had happened was that Mrs Napravilová – Josefinka – had been there and had left the pictures with the officer in charge. That’s how I confirmed my identity.”

Václav remembers returning to Lidice, and finding that his parents had been killed.

“When I came back to Lidice, at first Josefinka, who didn’t have children herself, wanted to adopt me, but by now my sisters had returned, and they wanted me to stay. Nothing was left of Lidice, but my uncle happened to live in the next village, Hřebče, so that’s where I grew up.” 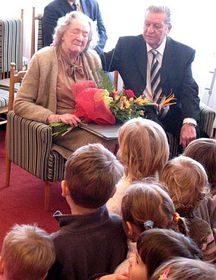 Josefina Napravilová together with Václav Hanf In 1947 Josefina Napravilová and her husband Karel moved to Vienna, where he had property that been returned to him after the war. But just over a year later Karel died suddenly, still only in his mid-fifties. Josefina started working for the International Refugee Organization. By an irony of history, she soon found herself helping refugees fleeing to Austria from the new totalitarian regime in Czechoslovakia.

In 1949 she emigrated to Canada, where she spent the next 45 years, enjoying a successful second career in a bank in Vancouver. She never remarried and always dreamed of coming home. With the fall of communism that dream became a reality. In 1994 she settled in the small Czech town of Bechyně, where she lives to this day.

Her story would have been forgotten, but for a newspaper article nine years ago that happened to quote Václav Hanf. He mentioned her name as the person who had brought him home, all those years earlier. A neighbour showed Josefina the article, she got back in touch with Václav, and ever since then, they have been close friends.

“I go to see her regularly. My older son also helps to take care of her. She’s been to stay with us, which has made me really happy, and I’ve always said to her that she’s a second mother to me, because she found me.” 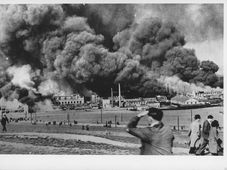 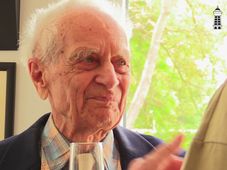 On the 17th of November 1939, Nazi soldiers executed eight Czech university students and a professor seen as ringleaders of protests…