Descending the historic Old Castle Stairs on the way from Prague Castle to the left bank of the Vltava River, an unusual structure will catch your eye in the middle of a small park between the river and a busy road. The five-and-a-half-metre tall wooden watchtower looks strangely out of place among the 19th-century urban architecture. It is an exact replica of a watchtower from a communist-era labour camp near the town of Příbram southwest of Prague. As a symbol of the oppression of the communist regime, the watchtower is part of an extensive outdoor exhibition titled “We Did Not Give It Up/Stories of the 20th Century” which has just opened in Prague to mark the twentieth anniversary of the fall of communism.

The exhibition is dedicated to individuals who did not give in. It tells the stories of three generations of people who were ready to stand up to Nazism and communism, to fight injustice and make personal sacrifices. From war veterans, to resistance fighters, to prisoners jailed by both totalitarian regimes, to dissidents and students who witnessed the fall of communism twenty years ago. Photo: CTK Speaking at the launch of the project this week, Czech Prime Minister Jan Fischer said that “the exhibition will help to overcome an ugly stereotype that we have gradually come to accept and which portrays the Czechs as a people for whom heroism is an alien concept and who have a habit of surrendering without a fight, of living in the grey area in perfect conformity.”

On 150 panels at various locations in the centre of the Czech capital, the exhibition tells the stories of those who did not conform. The main organiser is the civic association Post Bellum, a group of journalists and historians who have been collecting personal testimonies from individuals since 2001. Its chairman Mikuláš Kroupa spoke at the unveiling of the exhibition: Mikuláš Kroupa, photo: Milena Štráfeldová “This exhibition symbolically begins at Hradčanské Square outside Prague Castle with the portraits of people who survived the horrors of WWII, either as fighters in foreign armies or as inmates in Nazi or Soviet concentration camps. There we installed a cattle wagon as a symbol of the 20th century. A symbol that tore families apart and carried people to their death.”

Mr. Kroupa’s association closely cooperates with the Institute for the Study of Totalitarian Regimes which also helped to put together this latest project. Pavel Žáček is the head of the institute.

At the unveiling, Prime Minister Fischer likened the “We Did Not Give It Up” exhibition as “stations of the cross” of the Czech nation. The project has eleven “stations” around the centre of the Czech capital featuring different periods of 20th-century Czech history in chronological order. The mayor of Prague 1 which co-organises the exhibition, Petr Hejma, describes the route. Photo: Milena Štráfeldová “This is an open-air exhibition with eleven steps in the centre of the city of Prague. The trip starts at Prague Castle in front of the main entrance. There is an exhibition devoted to the period of the Second World War. There you can see a deportation wagon. After that you can go down to the centre to Klárov, that is next to the Vltava River. There you will find an exhibition devoted to the 1950s with a part of a wall of a communist labour camp. Afterwards you can walk towards Wenceslas Square. Wenceslas Square was the site of many demonstrations. Heavy technical equipment was used there by the police against people who were demonstrating there.”

Pavel Žáček from the Institute for the Study of Totalitarian Regimes told me more about his institute’s collaboration with the Post Bellum association on an oral history project. 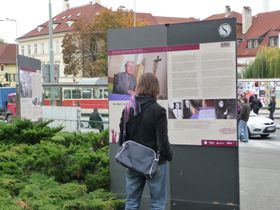 Photo: Milena Štráfeldová “Actually it is not just this project. We also cooperate on memoryofnation.cz which is a digital portal. We participate in that project to get interviews with victims of the communist regime, with the people who lived through the communist and Nazi era and we are planning to have a new project in the next couple of years.”

According to Mr. Žáček getting information about the past across, especially to the young generation, is what projects like this latest exhibition strive to achieve.

“Definitely it’s very important. We are not an institution which plans and organises only special events like conferences. We want to attract the public and we use all kinds of materials, like pictures and original materials of the security services as well as materials from dissidents, which are in our archives. We use them to support public discussion and to support projects such as this because they are very important. We would like to influence our public and especially the young generation.” 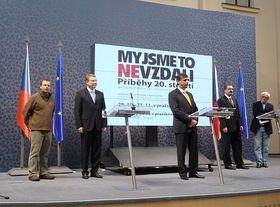 Mikuláš Kroupa (left), Jan Fischer (center), Pavel Žáček (second right), photo: Milena Štráfeldová Among those “who did not give it up” – to borrow the title of the outdoor exhibition – is Petr Placák, author and journalist who was an active opponent of the communist regime in the 1980s. He, too, believes such projects are very important.

“Such projects are organised all over the world. I believe it is vital to remember and reflect on the past and I believe it is crucial for any open society to discuss its own past, especially a past like ours.”

Officially starting on October 29th, the exhibition will be on display in the streets of Prague until November 23rd.