Dall Wilson is a member of the Moravian Brothers in Winston-Salem, North Carolina, a city where they have a strong tradition. Mr Wilson is an expert on the church and is planning a documentary about their origins in what is now the Czech Republic. He offers a potted history of the Protestant denomination, starting with how they found shelter in the free town of Herrnhut in Saxony in the 18th century.

Herrnhut “The Moravian Brothers came from a small group of people who smuggled out of Brno, from the parish of Comenius. They took with them the Rules of Order, which were very important.

“First they went into Saxony, where they were given some land by a Saxon count. He helped them survive by using his lawyer skills and his diplomatic skills, and his family connections with the king of Denmark especially.

“That gave them the opportunity to set up communities that were literally built from scratch. They walked into a forest, felled trees and built towns all over Europe, all over Scandinavia, in Greenland, in North America through the Caribbean and Africa, and actually as far as Tibet.”

The Moravian Brothers also established themselves in North Carolina in the early part of the 18th century.

“Their reputation as community builders was so strong that they were asked by the British Lord Granville to take 100,000 acres of land at an extremely good price. He even reduced it in order to entice them to go there.

“A small group of men arrived first, including a surveyor, and they explored the country. They said the town, which they called Bethabara, would be at this point and our plan for expansion is to set up other towns and we will go. 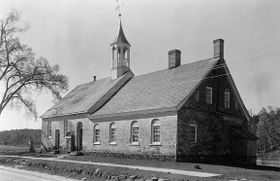 Bethabara Moravian Church “That was the beginning of the town that I am from, which was established before the Revolutionary War and now is the third largest city in North Carolina. It’s a very prosperous place, where the Moravian tradition is strong.

“It’s part of the history of North Carolina that Moravians founded the state. They were an example of how to make a community work.”

Wilson says the strength of the Moravian Brothers community in Winston-Salem today builds on the church’s success on the Old Continent.

“The town itself is around three or four hundred thousand people, and a good percentage of that is the Moravian community, be they of Czech descent or the others who came with the Moravian diaspora.

“What I mean is that the Moravians were extremely popular. Their solution for living was extremely popular, even in the early 1700s their new community in Saxony called Herrenhut was getting 100 fan letters a day. 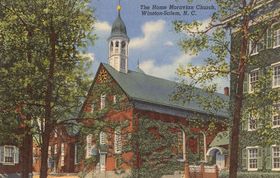 Home Moravian Church, Winston-Salem It seems the Moravian Brothers also made an impact on American culture. Author James Fenimore Cooper based the Indians in The Last of the Mohicans on the works of a British-born Moravian missionary named John Heckewelder. And in the series of which the book is part, The Leatherstocking Tales, a Moravian missionary appears.

“One of the early novels of American literature The Last Mohican [sic] was a Moravian. His story about joining the Moravians is interesting. A Moravian missionary appeared, very tired, actually collapsed from exhaustion right in front of him.

“He says, I looked at this man and I thought, I should kill this man. We’ve had all these people talking about God and what do they have to tell us about that?

“But there was something in this beyond language, beyond…just the human connection of kindness and friendliness that marks the Comenius tradition that made him stay his hand. He kept him alive and they started talking, and that became literature.”

Getting back to the Protestant denomination’s beginnings in America, they had considered establishing a base in Georgia, but found conditions in the state difficult. 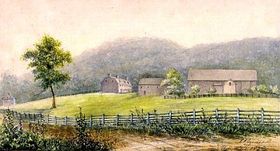 Bethlehem by Rufus Grider, 1875, photo: www.moravianchurcharchives.org “The first settlement was attempted in Georgia, and there were so many mosquitoes and different problems – problems with the Spanish, problems with this and that – that they relocated to Bethlehem, Pennsylvania, which is not far from Philadelphia and not far from New York.

Wilson says the Moravian Brothers’ ethos has also caught on rather further afield.

“They went as far as Tibet. They went to Africa, they went to South America, and they set up communities everywhere. Some of these communities have lived under the Moravian Rules of Order for 300 years.

“Are they Czech? No, they’re Caribbean people, they’re African people, who find that this way of co-operative living, not worrying about what people have in their minds as regards theology, but actually working with them to co-operate in living, is successful everywhere.”

Wilson has visited the birthplace of the Moravian Brothers in the past, and is actually working on a film about the denomination’s beginnings.

“I have been in the Czech Republic a number of times and I am going to be in Moravia in February where I am going to continue my music and film compositions, and work on the documentary about these people and where they come from.

“I want to visit the villages that they emerged out of, that they talk about working to…In those days they were walking from Brno to Copenhagen. It’s amazing they survived.

“Being in the Czech Republic is a revelation to me, because happily it lacks the elements of the Puritan group that also came to America and always something to guard against, I think.”

Dall Wilson offers an example of the kind of relatively laidback behaviour that makes the Czech Republic appeal to him.

“The first time I went to Prague I saw them selling alcohol to…I think a kid picked up some cigarettes and a bottle of vodka for his parents. This would cause a heart attack of the whole state of North Carolina with six million people. That kind of silliness is a huge waste of human energy…” 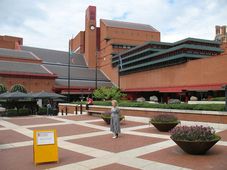 Archaeologists in the eastern town of Přerov have discovered what they believe are the foundations of a 17th century school, once…