Czech scientists are using the latest technology to study the ancient roads of the Bohemian kingdom. Unlike Western Europe, the area of present-day Czechia was not colonized by the Romans, who developed a sophisticated network of paved routes or “via Romana”. This means the road system was developed without any earlier blueprints. 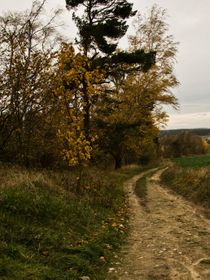 Some Czech country and field roads have been in use for centuries, photo: Vít Pohanka / Czech Radio Imagine a small village on a hill by a busy road. The name of the village is Stržanov and used to be Strážanov, from the Czech word strážit (in English to guard or to supervise). This fact led a local amateur 19th-century historian to conclude that the present-day road is simply a continuation of an ancient transport artery connecting Bohemia with Moravia.

The Libická Road as it was called, is vaguely mentioned in one ancient chronicle. And the 19th-century amateur historian, from the nearby town of Žďár nad Sázavou, was sure that the local Cistercian Monastery was built here in the 13th century precisely because of the road.

But that was a rather hasty conclusion, says professional historian Miloslav Lopaur:

“We have very little real evidence of archaeological nature as to where exactly the Libická Road led. Historians in the 20th century concluded that the Žďár Monastery was more probably on a connection between the Libická and Haberská roads. There is, however, no doubt that this major communication artery of the Bohemian kingdom passed somewhere in this area. It is just the exact passage that we cannot be quite sure about. There are several hypotheses, and it seems probable that the road changed its path as time went by and there could have been parallel sections. As the settlement was becoming denser here on the borderland of Bohemia and Moravia in the 12th and 13th centuries, the road could have led in two or even three directions.” 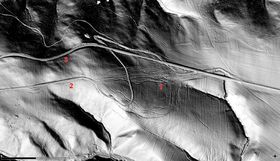 Laser scanner generated map of a bundle of trails, photo: archive of Centre for Transport Research But there is not much more that we have known about most of the ancient Czech roads. Until recently, that is, with research in this field now gaining momentum.

The Czech Ministry of Culture finances the National and Cultural Identity program, which includes the project Moravian Crossroads. Experts from Palacký University, the Archaeological Centre and the Centre for Transport Research in Olomouc, eastern Czechia are cooperating in a unique way to find out more about the travels of our ancestors.

Jan Martínek is a researcher in geoinformatics and describes the way he and his colleagues work: 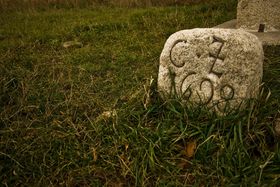 Crosses and milestones by old Czech roads, photo: Vít Pohanka / Czech Radio “We try to project the old maps into modern relief or three-dimensional maps in relation to actual terrain and water streams and rivers. After assessing these projections, we designate polygons through which the historical roads most likely led and we send colleagues to do the actual field survey. When they can find some archaeological artefacts further confirming that there must have been some traffic in the Middle Ages we start an air survey. The plane is equipped with a laser scanner that creates a highly accurate terrain 3D map and that enables us to chart the ancient road in great detail. Or rather the bundles of paths that made up such a road.”

Yes, bundles. We usually see in historical films that people in the Middle Ages had roads similar to ours, only not so wide and paved. The picture we get with the help of laser scanners and 3D maps is different. The roads were more like bundles of many single paths. Rather than on a single road, people would travel in a sort of corridor that could be half a kilometre wide: 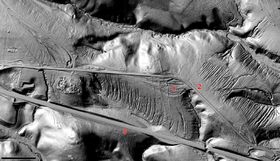 Laser scanner generated map of a bundle of trails, photo: archive of Centre for Transport Research “That‘s the most common width of such a bundle. But they can further divide into two or three other bundles. It is not always easy to exactly pinpoint the main corridor of a historic road. It can be a kind of network of pathways crisscrossing each other, not just one clear line going in one direction. It is rather a system of trails in a corridor several hundred meters wide that usually converge into one point only occasionally.”

Jan Martínek explains that people in the Middle Ages naturally selected the easiest path depending on the time of year, the weather, what and how much they were carrying and whether they were on foot, on horseback or in a wagon.

This made sense: A person on a horse or on foot could often take shortcuts that were impassable for a wagon. Interestingly, most of the bundles of ancient roads already followed the general directions of today’s highways and motorways.

Doctor David Vích works for the Regional Museum of Vysoké Mýto in Eastern Bohemia. For him as an archaeologist, modern technical gadgets mean completely new horizons: 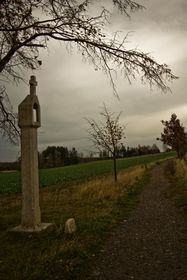 Crosses and milestones by old Czech roads, photo: Vít Pohanka / Czech Radio “The main road connecting Olomouc with Prague passed through our region. It was given the name Trstěnická Road by one of the historians in the 19th century. It is not a very good and certainly historically inaccurate title, but it has been used for so long that we continue to use it. Like in other cases, we were not able to say for sure where the road was. Now, thanks to modern technology, we are able to locate it much more precisely.”

This is all interesting and important for experts. But surveys by planes, laser scanners cost a lot of money and time. Is it worth it? Doctor David Vích:

“The roads tell us something about the mobility of the society in those days, the way they travelled and where. Essentially, it informs us about the various cultural exchanges and influences that formed the society of our ancestors. It is not a complete picture but it is like an important piece of jigsaw puzzle that we put together with information that we know from the history of art, etc., etc.”

So ancient roads are now telling us more than just how our ancestors travelled and where. They are helping us to understand why they travelled and how that gradually transformed their lives. 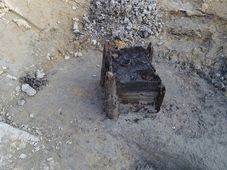 The world‘s oldest wooden structure is in the Czech Republic and it is a Neolithic well, according to newly published dating test results…