On August 25th, 1968, just four days after Russian tanks rolled through Czechoslovakia to crush the Prague Spring reform movement, eight brave Russians staged a daring protest on Moscow’s Red Square, unfurling banners that read “Hands off Czechoslovakia!” and “Shame to the Invaders!”. They were quickly surrounded by communist police, beaten up and arrested. Most of them spent years locked up in prison, labour camps or in psychiatric institutions. 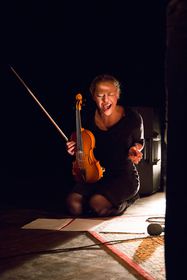 Theatre Continuo - 'Midday', photo: archive of Theatre Continuo Now a Czech theatre ensemble is staging a performance inspired by that protest and based on a book called Midday written by one of the protesters –Natalia Gorbanevskaya as well as the testimony of the survivors.

Czech Radio’s Pavla Kuchtová went to Theatre Continuo’s dress-rehearsal of Midday to speak with the actors and asked the ensemble’s artistic director Pavel Štourač how and when the idea had arisen to stage such a performance.

“It happened in 2013 when a group of Russian activists, who in 1968 had the courage to protest against the Soviet-led invasion of Czechoslovakia, went back to Red Square forty-five years later to commemorate the protest which had a huge impact on their lives. And the same scenario evolved on the square – within minutes they were arrested for taking part in an unsanctioned demonstration and taken to a police station where they were questioned about their motives. They were charged with disorderly conduct and served hefty fines. When we heard the news here in Prague we were outraged and shamed and we launched a protest petition that was signed by over 1,000 people in just a few hours and was handed over to the Russian Embassy in Prague. For me it was a very emotional moment and I felt we had to do something more to address the issue, to address it through theatre which was familiar ground to us.”

The performance – which combines movement, dance, music and puppet theatre techniques – took several years to create. Members of the ensemble met with the surviving protesters, their children and other members of the then-Soviet dissent, studied all the available documents on the events and discussed them with Czech and Russian historians. The resulting theatre performance was also greatly inspired by the poetry of Natalia Gorbanevskaya and her book Midday recalling the 1968 protest. The ensembles artistic director says it was a voyage of discovery. 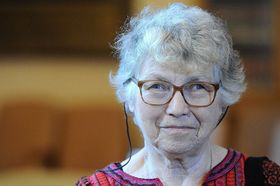 Natalia Gorbanevskaya, photo: Filip Jandourek “We spoke with historians, with people in this country who had any connection to the event – such as Jana Klusakova who smuggled the script of Midday into then-Czechoslovakia and who secretly arranged for it to be published in West Germany, we met with Milan Dvorak who translated the book and of course we contacted the three surviving protesters –Viktor Fajnberg, Pavel Litvinov and Tatiana Baeva. We had the honour to speak to Viktor Fajnberg whom we met on three separate occasions in Paris – they were long sessions full of reminiscences, information and a lot of vodka. It was these personal memories that helped us the most, but altogether the process involved hours and hours of studying documents, speaking with experts and seeking all the information we could get.”

“When you are able to talk to a person you register everything – not just their body language, but what they say and how they say it, you register their diction, their expression and the “colour” of their memory and then you transform that into movement, into speech, into music and link it all up.” 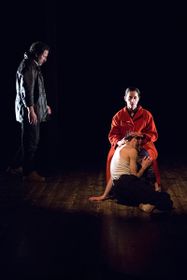 “The pressure and the terror they were subjected to was reflected not only in their psyche but also in their body and therefore we thought that dance and movement was the ideal way to express it, not to illustrate madness through bizarre movements but to use our bodies to express the terror, the oppression felt by someone who is subjected to such things and who is degraded on a daily basis.”

The ensemble discussed the artistic possibilities and decided that it would be impossible to tell the story of all eight protesters as well as their oppressors in one performance. In the end they focused on three of the people whose stories they had learnt about in great detail to present a picture of human bravery, suffering and fear. Pavel Štourač again:

“The ensemble chose to project the stories of three people – dissidents Natalia Gorbanevskaya and Viktor Fajnberg who shared a similar fate because they did not end up in prison or a labour camp as some of the others but in a psychiatric institution, and the story of a doctor who works there, who serves the regime, a man who had passed through the gulag, been rehabilitated and is so terrified of being sent back that he is ready to do anything. Those are the three people we decided to build the story around.”

The latter figure was included to show how the regime abused psychiatric institutions in suppressing dissent. Pavel Štourač explains:

“People who were locked up in psychiatric institutions – not just Gorbanevskaya and Fajnberg, but many others whom we spoke with, said that this was everyone feared most. Because even if prison was bad, you knew when they would let you out and it was the same with labour camps, but if you were locked up in a psychiatric institution there was no light at the end of the tunnel. Every six months you went before a commission and in order to get out you had to say “I’m sorry for what I did, I was deranged. Thank you for curing me. I’m fine now and I will never take part in anything similar again.” Without that admission you could be stuck there forever. Natalia Gorbanevskaya succumbed after two years and two months and gave them what they wanted, Fajnberg would not be broken and was later released only because of growing international pressure.” 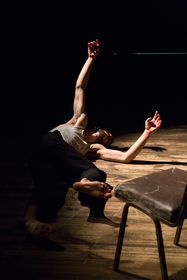 “It is an incredible story showing what some people are capable of in a crisis situation, the decisions that they are capable of making even when they know the terrible consequences their actions may have. I sort of feel that is missing in present day society – the decision to stand up for something at any cost, the Vaclav Havel attitude that some things are worth fighting for even if you fail over and over in struggling to obtain them – because you never know until you try.”

The ensemble’s art director Pavel Štourač say that getting this message across was possibly the biggest challenge that the actors faced.

“We would not be able to withstand what they did. We readily admit that. The resistance, the moral integrity, the deep inner conviction that some values are worth fighting for and even dying for –which they were clearly ready to do – getting that into the performance without sounding melodramatic or moralistic is hard – because today we simply can’t stand up to that.”