Pavla Horáková on her award-winning novel: I wrote the kind of book I myself would like to read

The winner of the prestigious 2018 Magnesia Litera Award for Prose went to journalist, translator and writer Pavla Horáková for her novel A Theory of Strangeness. Pavla, who is a former Radio Prague reporter, now has several books under her belt, including a popular trilogy for children and a book on soldiers serving in WWI. However, her first big novel, A Theory of Strangeness, which was an overnight success, is the most difficult to define. So when I met up with Pavla to talk about her new book my first question was how she herself would define it. 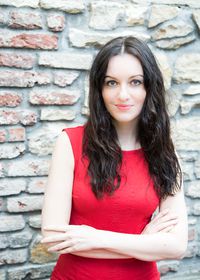 Pavla Horáková, photo: Richard Klíčník / Argo publishing “That’s a very difficult question, even for me. It’s a thick book, so I had the chance to throw a little bit of everything in it. So there’s a bit of romance, a bit of suspense, a bit of philosophy, various theories and hypotheses that the narrator has, there’s some history, some mystery and some science, some mild social satire and besides that some spirituality, New Age spirituality mixed with quantum mechanics.”

So it is about this young research worker called Ada….

“She’s actually nearing middle-age, she’s in her mid-thirties and she goes through an identity crisis you could say, she has just broken up with her serious boyfriend and she is not very happy at work with her scientific project.”

We should say she works at a fictitious institute…

“Yes, she works at a made-up institute which I called the Institute of Interdisciplinary Human Studies, it is a kind of anthropology research institute and people there engage in all sorts of bogus research. Some of the projects they carry out are real research projects that I came in touch with at a similar real-life institute but some of the research is completely made-up and kind of funny. So there is also a little bit of humour in the book, which I forgot to mention.”

There’s a lot of humour in it. But basically, it is about Ada’s search for happiness and an effort to free herself of the various restrictions imposed by society, which she eventually achieves. To what extent is the book autobiographical? Have you yourself travelled that journey?

“Yes, and I realized it only after I finished the book, because I followed a plot-line and only after I’d finished the book did I realize that the whole path of the narrator –the main character –was a path to freedom. I also realized that not only does she choose to free herself of the restrictions of the various institutions and the rigorous rules of society but all the other main characters do the same –her mother, her father, her brother, maybe not her sister. They all do it simultaneously and it dawned on me then that this part of the plot was more important to me than I thought.

“So, to answer your question – yes, I chose to be a freelancer many years ago and I never looked back. Personal freedom is something that is really important to me and it is something I fully realized only after I’d finished the book.”

Do people write to you and say – I understand what you mean, I can relate to that…I have been there? 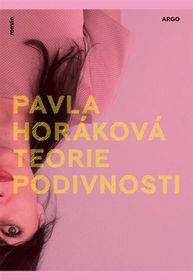 'A Theory of Strangeness', photo: Argo publishing “It is incredible, but it happens to me almost every day that I get a message on Facebook or via email from someone I know or a complete stranger saying how much they related to the ideas, to the perceptions, to little things in the book. They write –how can you see into my head? Or, I thought I was the only person who thought about those silly little things and now I am so happy to know I am not alone. Which surprises me, because I always thought I was the only one thinking about silly little things like mothers and daughters dressing the same way or combing their hair the same way…or streets that go downhill having worse-quality shops than streets on a flat plain. So it surprises me, it pleases me, it humbles me, but it happens and I guess it will go on happening.”

As we already said, the book is full of mysticism, full of quirky stories and strange coincidences; it features a real place called Šumperk, where strange things happen. I know you collected those news-stories during your time at Radio Prague and that they are all true – but I also know you have a theory about places having a special energy built-up over the centuries as a result of the events that took place there. Do you believe that?

“That is an idea that sounds pretty wild, an idea that is farfetched, but it is something that appears in fairytales and fiction and in art throughout history, so there must be something to it. The Latin expression for it is Genius Loci. There is something in certain places, you feel a certain energy, a special spirit or force. My main character notices these places around Prague -and Prague is a place permeated with history, strange things have happened in places, there are strange stories from various periods of history - she notices that certain things have an inclination to occur overtime in various periods of history. So that is also part of the plot.”

The main character Ada says in the book that she only needs five seconds to know if she wants a man, and the same goes for a book, film or piece of music. Is that true of you as well?

“Well, I noticed that if I read five pages of a book and I don’t like it there is no point in continuing because it will not get better for me, even if the book is appreciated by other readers. And it is the same with films…”

We started out talking about men, didn’t we?

[Laughs] “It is basically people. Ada’s academic project is assessing to what extent people like one another mutually, to what extent an instant sympathy, or antipathy, is mutual. And she also applies that to men, of course. That is something I noticed as a young child - that I either like somebody or dislike them at first sight. In some cases it might get better overtime, but I have found that even if it does, eventually I will return to my initial feeling about that person.”

I am sure that this is something that very many people will relate to. What I myself liked most about the book were the perceptions in it. It is a book you can open anywhere, read a bit, come back after a few days open it at a different place and enjoy another chapter. It is very amusing and there is nothing quite like it on the Czech literary scene. What do you think gave it an edge over the others, what got you the award?

“I really don’t know. The jury has five members, so I guess it was some kind of compromise between five individual tastes in literature. So it is hard to say…”

But everyone loves it. The critics, the public… 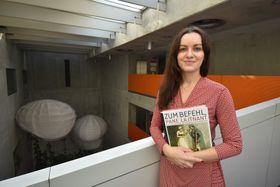 Pavla Horáková, photo: Ondřej Tomšů “Oh, not everyone. I’ve had bad reviews as well, but mostly from people who don’t have a sense of humour, I’d say. [laughs] But one Czech critic says that reading contemporary Czech fiction feels like entering a dark and cold cellar and that my book is different in that regard. That’s something I completely agree with because for me Czech fiction in recent years has been very dark and depressing, very heavy. And I like some lightness and joy and humour in my literature, in my books, so I put some in to satisfy primarily my demands as a reader. So I wrote the kind of book that I myself would like to read.”

Whenever a book or film is a great success people always ask about a sequel. Are you thinking of writing one?

“Well, when I finished the book I realized that I had so many left-overs in my notes, metaphors, ideas, perceptions… things that didn’t fit in the book. And I thought – I shall have to write another one. I considered a sequel with the same main character and then I thought, maybe not, maybe it is not a good idea because it is always hard for the sequel to reach new audiences since you first have to read the first part, of course. So it looks like I will write a similar book – many authors keep writing the same book over and over, so that’s nothing to be ashamed of. I see it as being very similar in tone and style and content, but I will choose a different narrator. I am afraid she will be female again, but as most fiction readers in this country are women – I might as well.”

Finally, one of our listeners has asked where he could buy the book in English – what are the chances of it one day reaching English speakers?

“I guess the chances are quite small. It is very rare for Czech fiction to be translated into English because the US and British markets are very self-contained and it is difficult for any foreign literature to reach English-speaking audiences. But, it might happen. Who knows? Now translations are being negotiated into Italian, Polish, Bulgarian, Hungarian and German, so we’ll see.”

The Grandmother: the book that every Czech knows

The Grandmother by Božena Němcová is an iconic work in Czech literature. The novel about an idealized rural community in the early…