Over the past weekend, the Royal Gardens at Prague Castle remained closed to ordinary visitors as they hosted the annual Prague Food Festival – a celebration of good food and fine dining. In the course of three days around three dozen of the country’s best restaurants showcased their dishes, served at moderate prices to an appreciative public. 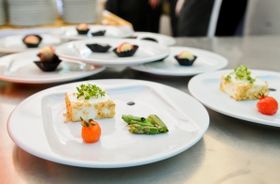 “We also invited local music, so we will have a ‘capella’ from Napoli, we will have a school of Flamenco. There will also be a painting school of food. So visitors will not only have an opportunity to taste the food, the wine and beer but they will also have a cultural programme. What is also important is that our motto or theme for today is ‘Think globally, eat locally’. And it will be influencing all the restaurants and also all the cooking shows and the whole programme.”

From beef to beetles, from calamari to candyfloss – all was available at the outdoor stands scattered around the leafy garden with carefully trimmed lawns offering breathtaking views of the spires of St Vitus Cathedral. Outside the Renaissance Ball Game Hall and the Royal Summer Palace you could run into local celebrities as well as students with backpacks, foreigners and Czechs alike, tasting the various exotic and local dishes. One of the truly local products served at the festival was Pilsner Urquell beer. I spoke to Václav Berka, chief brewmaster at Plzeňský Prazdroj brewery that produces the traditional Czech beverage. 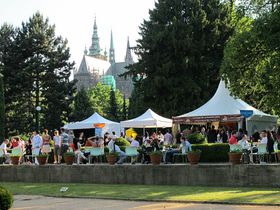 Photo: Prague Food Festival “We come every year to this festival with something new or with a new focus, new direction and this year we will of course present new products for tasting. But as you probably know this year the festival is connected with healthy eating. A special drink will be presented here made from green barley. We are one step ahead because we use barley which is germinated – it’s malt. And we have used it for the production of beer for a long time. This year we will celebrate 170 years since the first brew of Pilsner Urquell.”

Mr Berka says that in line with the festival’s motto this year, Czech breweries care about the origin of the ingredients they use.

“I think the business industry is again one step ahead because a few years ago the Czech Beer and Malt Association, which covers practically all breweries in the Czech Republic, launched the registration trademark České pivo – meaning Czech Beer – and this Czech Beer has a rule that only local products will be used in its main volume, which means Czech barley for the production of malt, Czech Saaz hops for hopping, of course using all traditional recipes and processes. It means we have been using it for a long time already.” 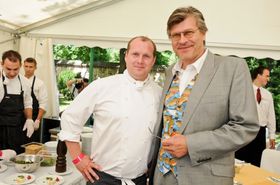 Pavel Sapík, Pavel Maurer, photo: Prague Food Festival Among the famous chefs taking part this year was also Michelin star holder Roman Paulus of the Prague Radisson SAS Alcron Hotel. As a seasoned participant in the event, he regrets there is never enough time to try the dishes served by his colleagues. His love of local cuisine and ingredients showed in his choice of menu for the festival.

“I especially like to prepare mushrooms and game, all kinds of venison, wild boar, all kinds of late summer, autumn seasonal dishes. This year we are serving organic pork belly confit with green lentils ragout and shallots cooked in vinegar.”

With a host of popular cooking shows on television and new farmers’ markets springing up around Prague, I asked Pavel Maurer, the founder of the Prague Food Festival, whether he thought Czechs’ attitude towards food was changing.

“Slowly. Slowly – from the statistics you don’t see very big differences, especially outside of Prague. Eighty-five percent of people still eat the top five dishes which are typical for this country and there are not so many experiments. But, on the other hand, there is a big target audience of young people between 18 and 25 who come to the festival every year. They exchange opinions on the internet and in food blogs and elsewhere. In this new generation I can see a very big progress. They really care about food, they care about where the food comes from, what the CV of the food is and what the quality is. So I am very optimistic.” 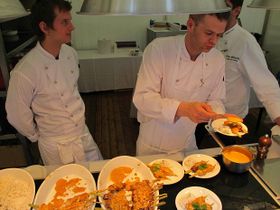 “Many people are now interested in what they eat, which is very good because some people in this country would still rather buy better quality oil for their car than spend their money on the food they eat. But I think it’s getting better and better.”

Much as he’d like to use fresh local produce, Roman Paulus says it is sometimes difficult to come by in Prague.

“I would, I love to work with it but there is still not enough. So we have to work with the farmers to get them to produce the right ingredients for us. You have to find your own farmer to produce for you and because there are so few of them, you have to select very carefully and look for them.” 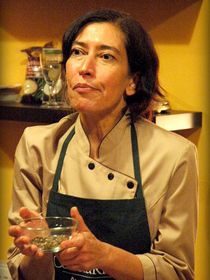 Sofia Smith “I’m really excited but I’m really worried logistically because it’s big and we are a small restaurant. Le Patio is a restaurant on Národní Street. It’s been there for many, many years as a café and a restaurant. I’m actually the new executive chef of Le Patio and I’ve only just started as well, a couple of weeks ago. We are trying to revamp the menu and at the end of the day just cook good food so we will have the café part, have cakes and I’ll be doing a more Asian-leaning tasting menu in the restaurant upstairs. And, over time, we hope to develop it to brunches, breakfast and things like that. Just good food, because it’s a massive space. And because I’m half Asian and half Irish, I like to do a little bit of both. The Asian side and then with the Irish side I do a lot of great desserts, great breads and things like that.”

Even though many of the dishes Sofia Smith prepares require exotic and therefore imported ingredients, she says she tries to use local products as much as she can.

“I love the shift now towards local produce and it’s great to see a lot of farmers’ markets. That I think has changed. I don’t know whether it’s changed because my Czech friends are telling me: ‘Yeah, you know, I used to get eggs from my grandmother, I used to get vegetables from home but now it’s more to the forefront and I think more easily available for those of use living in the city. So I’ve seen a lot of changes. I’m so, so happy to be able to use local produce, especially since I use a lot of exotic ingredients and spices – they are all imported. So what I try to do is whenever possible to use local vegetables and meat. That I’m really, really excited about. Because I feel slightly guilty that a lot of the spices and stuff are imported.” 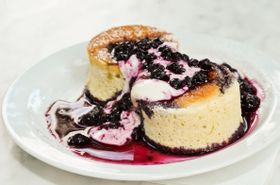 Photo: Prague Food Festival Just as I was leaving the beautiful premises, I asked one of the visitors, Ondřej, an active member of the Prague food-blogging community, for his impression of the festival.

“I’m here for the second time. I think it’s a great idea to host this kind of event at this beautiful place near Prague Castle. I have tried some calamari, some nice pork, and also some vegetables and some pretty nice desserts. It was all really, really good.”

...and there was a lot to choose from. Whether you prefer traditional Czech cuisine, fancy some of the more exotic dishes or whether you are into novelties such as molecular gastronomy, the feast of culinary variety offered something for everybody’s palate.