Over 170 years after it was created, Antonín Langweil’s unique and remarkable cardboard model of Prague has just been unveiled in a new form – a digital version which means users can get a taste of the city as it was in the early 19th century on a computer screen.

In a moment, we’ll meet the head of the team that carried out the painstaking digitalisation process. But first, the model itself is described by its curator at the City of Prague Museum, Kateřina Bečková.

“It’s a realistic, three-dimensional, colour depiction of the historical centre of Prague, meaning the Old Town, Malá Strana, Hradčany and Prague Castle. It was created at a time before photography existed, so it’s the only record we have of many buildings, because the city later changed a lot. And around half of the houses depicted are no longer in existence.”

Inspired by a model of Paris he saw on display in Prague, Antonín Langweil, who was a librarian at the Clementinum, began building his phenomenally intricate scale model in 1826 and had yet to complete it when he died 11 years later. Twenty square metres in size, it features 2,500 structures depicted in great detail, even down to individual house signs. Bečková continues:

“We have it in a dust-proof, air-conditioned show-case in order to preserve it as much as we can. Of course, it won’t last for thousands of years, but it should last for hundreds.”

The owners of the Langweil Model of Prague now have less reason to worry about its survival thanks to the work of Jan Buriánek from the company Visual Communication. He has overseen the project to digitalise the cardboard model, which was financed by Prague Town Hall.

“Basically we used close range photogrammetry methods that were the very latest methods in computer vision and computer graphics. We had many limitations regarding the lighting, we had to build a special robot which did quite precise capturing of the model from various sides. And we had to use many views of one point every three centimetres.

“All the while we had to process eight terabytes of data, which was an enormous problem even for today’s computers. We had to use continuously something like 48 CPUs [central processing units] for the whole two years. It was quite a compute-intensive project.”

How much work was it, in terms of man hours? How many people were involved?

“We tried to count it and we were surprised that it was five times longer than Langweil needed to build that model. It means something like 40 man years – a lot. There were more than 170 operators involved in the project and the core team of programmers was something like 20 people, because it was quite difficult,- it was on the edge of the technology.”

How will people use your digitalisation of the Langweil Model?

“The first goal of the project was some kind of documentation of the model. Then for scientists and people from the museum we built a special application for a quite precise annotation of the model, and for viewing from various sides.

“And finally we also evolved this expert application to a public application. These applications include a kind of computer game which is being released in May. There is a special application called virtual guide around the Langweil Model; it’s a 3D flyover of the model from a very close distance – you can feel like a small bird flying around the main parts of the city.”

What will people learn about Prague from your work?

“The one thing we realised in doing the project is that there are many buildings that are the same in the model as in real Prague. It is because Prague, the historical centre, is really well preserved. We learned that many signs and many historical buildings are still in Prague, and you can compare that…it’s very fascinating when you can compare a paper artwork with real Prague, and it fits.”

“You had to look for things physically in the past, which was demanding because the model is large. It can be separated into different parts, but working with them is complicated, because they are big and heavy. You can’t see everything. But now you can sit in your office and you have all the details up close on the monitor in front of you. The work is very easy, and enjoyable.”

That’s the view of an expert. As for the general public, how can they enjoy the fruits of this extensive, CZK 14.5 million project? Zuzana Strnadová is the director of the City of Prague Museum, which is right by Florenc metro station.

“There’s a website, www.langweil.cz. Also in our main building there are two interactive kiosks, where people can browse the digitalised model themselves. You can buy a DVD about the digitalization, and there’s also a virtual guide, which features virtual walks through parts of Langweil’s model. From April we’ll also have a small 3D cinema at the museum.”

And for those who can’t make it to Prague? Can they find the digital version of the Langweil Model on-line?

“On the internet there are only extracts. You can experience interactivity on the DVD and at our museum. I should say as well that most of these applications are relatively demanding in terms of both computer hardware and software. But I believe in progress, and I’m sure in the future it won’t be anything special.” 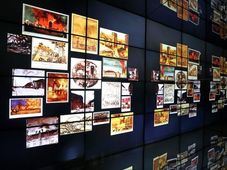 The popularity of disaster movies shows how people are fascinated by catastrophes, natural and otherwise. Now there’s a permanent exhibition by… 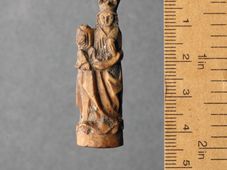 The City of Prague Museum has published the results of two unique archaeological digs carried out in the centre of the city. Among…