If you visit the Czech countryside at the start of the year you are likely to receive an invitation to attend a "zabijačka" – in other words a pig-slaughter feast; a centuries old tradition that is still observed in many parts of the country. While for some it is a barbaric practice that has no place in the present-day, for others it is an important part of village folklore that brings people together.

A pig-slaughter feast is precisely what the name suggests – the slaughter of a pig out in the open by a master butcher, the processing of the meat and intestines in front of those invited and subsequently a boisterous pork feast accompanied by drinking, music and dancing which generally leaves everyone much the worse for wear. Photo: Straktur, Wikimedia Commons, Public Domain In the old days, the home breeding and slaughtering of pigs several times a year was an economic necessity. People would stock up on meat for the harsh winter months or slaughter a pig to provide for a big celebration such a wedding or a christening in the family. A pig slaughter feast was a big event to which the whole village was invited and no-one came away empty handed. The way it worked in most villages is that people slaughtered their animals at different times and shared - so that there was always good pork in the larder.

Václav Stejskal, one of a dwindling number of master butchers who are called to pig slaughter events around the country, explains what such a “meat eating” festival looks like.

“In the old days the butcher would arrive at 6am and the host would offer everyone a shot of plum brandy to start the day. Then the master butcher would get to work, the pig would be put down, hung up and butchered; separating the pork shoulder, belly, loin, butt and the head. By this time family and friends would start arriving and the housewife and female helpers would roll up their sleeves and get to work, producing specialties from the different pork cuts, mixing the products in huge vats and basins out in the yard or in the kitchen, hands elbow-deep in the still-warm mixture of pork intestines and blood. In the course of the morning they would produce blood pudding, sausages, cracklings and headcheese which would be served warm to the guests.” 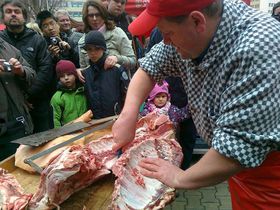 Photo: Evelyna Kulíšková, Czech Radio Gradually, the entire pig would be processed –there were no left-overs -and the meat would be conserved for the coming weeks. The winter afforded better conditions for preserving meat but housewives had various ways of conservation before the arrival of tins.

“Most of the meat that would be eaten later was smoked which enabled better conservation, but housewives used other ways as well, they would put chunks of pork into glass jars and cook them or else they would place the meat in lard which also kept it fresh. They would put the vat down in the cellar, cover it and take out chunks of meat as they needed them. “

The sights and smells at a traditional "zabijačka" can be overpowering even for people with a strong stomach and few foreign visitors are willing to attend one. However Václav Stejskal says that under the new EU regulations much of the gory procedure remains hidden from people’s and particularly children’s sight. And everything takes place in line with strict veterinary and hygiene norms. 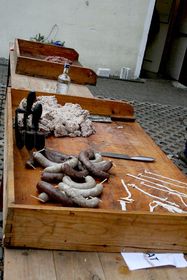 Photo: Jaroslava Indrová, Czech Radio “Today pigs cannot be put down in the open with people watching. So what happens is we do it elsewhere and just bring the meat cuts for the pork feast, where people can either watch us work or stand around and socialize waiting for the soups, sausages and head cheese to be served. Some families who no longer breed pigs still buy them and host a pig-slaughter feast for their friends and neighbours. And such feasts are often organized by local associations of hunters, firemen or gardeners to bring the villagers together. When the food is good, people have a great time and everyone comes away happy.”

Although home pig-slaughters are no longer an economic necessity, you can still come across these feasts in some parts of Europe – Croatia, Serbia, Hungary, Italy, Greece, Portugal and Spain to name just a few countries. Although in the Czech Republic the number of pig slaughter feasts has decreased in recent years there are still around a 100,000 of them taking place annually. And sometimes farmers organize them or take the end products to the big cities for people to sample. Jan is very much a city person, but he remembers these feasts from his childhood in the country and takes always finds the time to attend one with his family.

“We come here regularly, and bring the children, there is lots of good food, plum brandy and mulled wine and the atmosphere is great. We are quite busy, but we make time for this every year –we haven’t missed one yet.” 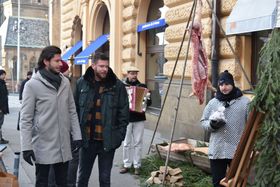 Photo: Ondřej Tomšů While many people just want to buy the end products, because they taste so much better than pork bought in the supermarket, others like the idea of seeing the various dishes made in a simple way as they were centuries ago. Vaclav, who learned the art of butchering a pig from his father and attended these feasts from the age of seven, says he would be sorry to see them disappear.

“I think the zabijacka is still popular with many, although for the young generation it seems to lack significance. But I would like to see it preserved, I would like people, even young people, to know about this tradition, and to taste the delicious meat products that come from it.”

And as these pig slaughter feasts become rarer, they have also become commercialized. While in the past the traditional "zabijačka" was a feast attended by friends and neighbours, today there are firms offering them as an experience gift and, in neighbouring Hungary, some companies select them as popular team-building activities.