Since 1884, the Zátka Brothers’s plant in Boršov nad Vltavou, just south of České Budějovice in southern Bohemia, has been producing noodles, spaghetti, macaroni and other types of pasta. The small factory on the bank of the Vltava River, survived two world wars as well as totalitarianism, and is one of the few remaining witnesses to efforts by the first wave of Czech industrialists. In this edition of Panorama, we take a tour of the oldest Czech pasta plant.

Traditional Czech meals usually come with the famous knedlíky (dumplings) or potatoes on the side. Gradually, Czechs have also gotten much more used to rice and pasta now just as common. But some in Bohemia believed in the success of pasta quite early on. Two brothers – Vlastimil and Dobroslav Zátka – from an established entrepreneurial family decided in the 1880s to expand their family business, and opened what soon became the largest pasta plant in then Austria-Hungary. More than 120 years since its foundation, the plant still produces pasta today – and the factory’s director Jiří Zvoňar says the recipes have not changed that much.

I sat down with Mr Zvoňar in his office in one of the historic buildings of the compound. The factory has not changed much on the outside since its early days; more up-to-date technology was always fitted inside the original buildings of the mill and the production hall. And it seems that despite all the turbulent changes of the 20th century, Czechs’ taste in noodles has not changed a bit, either – at least when it comes to Zátka’s pasta. Traditionally produced from soft wheat dough, it was not much affected by the arrival of real Italian pasta in the early 1990s.

“After the revolution, or after the fall of communism, the possibility came to the Czech Republic to buy Italian pasta. Italians make their pasta of the hard, semolina wheat. That means that today, you can find pasta in two varieties – soft-wheat pastas, and semolina pasta. I think that Czechs prefer soft pasta. It of course depends on the taste of the customers but most of them buy products from soft wheat.”

The factory first opened as an addition to a local flour mill, already owned by the Zátka family. Besides mills, bakeries and the pasta plant, the family assets once included a soda water factory – which also still exists today – and the family was one of the founders of the world-famous Budvar brewery. Zatka’s pasta was a big success; it was exported to the whole of Austria-Hungary and other European countries as well as Asia because their pasta could resist the harsh transport condition better than any other brand.

With the break-up of the old Empire and the founding of Czechoslovakia, the markets grew smaller and the company lost some two-thirds of its customers abroad. The plant was confiscated twice – by the Nazis during WWII and the Communists after 1948.At that point, the Zátka family left Czechoslovakia, and when the factory was returned to them after the fall of communism. Today, the Bratři Zátkové company is one of the largest producers of pasta and flour in the country, with most of its production sold in the Czech market.

“Our monthly production is around 1,200 tons, and we export just very little – one or two trucks a month, so some 50 to 75 tons. So we are really focused on the Czech market. We have now 150 employees. Most of them come from within 20 km distance from the factory. The atmosphere here is really familiar.”

To check out the friendly atmosphere, Jiří Zvoňar took me on a tour of the plant. We started with the largest building – the 120-year-old mill. Wheat is transported to its top floor, where the grains are crushed and further processed before the flour moves one floor down.

“Because of new technology, we have 78.5 percent of yield – speaking about the grain, that is.”

One floor down, there is a long row of machines that separate the various kinds of flour.

“We are now in the part of the plant where the flour is mixed. These are the new machines – when were they installed?”

“They were installed at the beginning of this year. We have eight lines here; six of them we renewed and they are for with flour, while the remaining two are used for pollard – otruby.”

The pasta productions lines are on the second floor. At one end, flour together with all the ingredients comes in, and all kinds of pasta come out at the other. The atmosphere here is familiar, but also very hot as the pasta has to be dried before it is shipped downstairs for packaging.

“And hot, you can feel it. We are now on the second floor where the production lines are situated. We have three of them. One is called the short line, for short pasta, another line makes spaghetti, and the third makes our rolled egg noodles.”

On the first, or ground floor, pasta is wrapped and stored before it’s loaded on trucks and shipped away.

“We are now standing in the packaging department, looking at the employees packing spaghetti right now into boxes.”

The main building of the factory still has room for modern machines, and the management has not had to expand further along the river bank. The compound has several other buildings from the times of the founding brothers, and one of them houses a real technical treat – a Francis water turbine.

“This turbine is 120 years old and it still makes electricity for the plant. Another advantage is that we sell the surplus to the Eon electricity company, and we get the green bonus back.”

Hello and welcome to the ABC of Czech in which this season we discuss words and expressions related to Czech food and cuisine. Today… 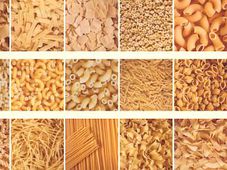 Welcome to the ABC of Czech and its current culinary series. Today we'll look at pasta in Czech cuisine. If you have so far associated…