The rise of the Czech farmers' market

Quirky market stalls have been appearing and disappearing during Christmas and Easter in spots like the Old Town Square for a number of years. But recently, they have become a far more permanent feature at a number of locations across Prague and the Czech Republic. The main appeal of these farmers’ markets is that they can offer customers the kind of produce one can’t and won’t find in supermarkets. The large chains require guaranteed volumes of bulk goods and of a standard quality. Farmers’ markets offer the opposite: local goods from small producers – everything from freshly laid eggs, to unusual cheeses, homemade cakes, Czech garlic, potatoes – the list is endless. 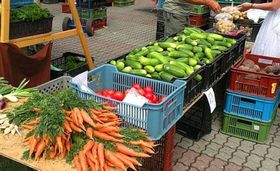 Photo: archive of Radio Prague Iveta Jungová has been offering dairy produce at various farmers’ markets since 2005. I spoke to her at her stall outside Pankrác’s Arkády shopping centre, which hosts a regular Wednesday farmers' market:

“We don’t supply to supermarkets, because firstly we could never provide the volume that would be demanded of us. But we do sell to 32 organic stores across the country and also to restaurants or hotels. We are able to meet the volume demands for cheese – from goat’s, cow’s and sheep’s milk – that they require.”

But what of the notion, famously propagated in the 2004 documentary film Český Sen (Czech Dream), that Czechs are obsessed with the lowest prices at all costs? Iveta Jungová again:

“I believe that many people today do not just want the lowest price. We have regular customers who purchase the cheeses here that they find the tastiest... I would say that very recently we’ve seen a small drop in customers because so many of these farmers’ markets have been opening up, and so people have a huge choice of produce to buy. People come to sell their goods from all over the country: for example Moravians selling wine; cheeses from southern Bohemia; and our farm is located in northern Bohemia.”

I asked a random customer, a young Czech called Peter who was visiting a well-stocked cake stall, why he comes to the Arkáda farmers’ market:

“I usually come for the variety of goods that I can buy here. Seasonal produce, vegetables, wines – everything. I most like the variety and the ability to see and choose different kinds of food.”

But what about the “Czech Dream” myth of people only seeking the cheapest products?

“To be honest, I am not a common type of customer, because I prefer quality food rather than the cheapest.” 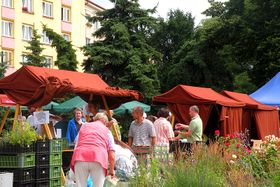 Photo: archive of Radio Prague So you are happy to pay more for quality?

“Yeah. If it is better, I don’t care about money.”

And you feel that farmers’ markets deliver better quality than supermarkets?

“Mostly, I really do. I enjoy going to new markets and trying new things, and if I like them I keep buying from there.”

I asked another customer, a young woman called Regina, who was buying fresh hand-made pasta, what attracted her to such products.

“Because I think it is better. It tastes better. And it is fresh. I feed it to my child, and the positives are more than the price – and I do it [only] once a week.”

Over at another market in Prague’s Holešovice, open everyday and housed indoors within a vast hall, I spoke with Alena. She runs the Štepánovsko farm near Hradec Králové and proudly showed me some pictures of the site where she rears free range chickens and then sells freshly laid eggs and other products to hotels and also at her much-frequented stall at Holešovice market.

“I like this phenomenon, as we have a tradition of people being able to choose what they like at such markets. During communist times there were obviously far fewer, but the tradition goes back to the First Republic – people always wanted this.”

So are Czechs now consciously seeking out local, quality goods?

“Average wages are still comparatively low in this country, and that is why there has been such a rush to find the lowest prices. I really don’t like this. Whenever I hear that Lidl or some supermarket has some special offer, or discount, then I ask – who is actually paying for this low price? And then many products are presented as being Czech and really come from goodness knows where, and you don’t even know what is in them. There are some German sausages, for example, that have 85 percent meat content for local sale, but the exported variety has half that amount. So I think it is better to get 100 grams of something good than a kilogramme of something bad.” 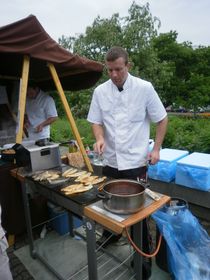 Photo: archive of Radio Prague Šárka Sedláčková is the co-founder of Archetyp, a civic organisation that has spent the last eight years lobbying for a return of farmers’ markets – with producers directly selling their goods rather than those bought from wholesalers – to Czech streets. The association oversees two such markets – one on the banks of the Vltava called Náplavka, and another in Jiřího z Poděbrad, Prague.

“Eight or ten years ago, the mood among the population was that we don’t really need farmers, and can import everything, and that groceries aren’t really an interesting commodity anyway. But as times have moved on, thanks in part to campaigns waged by groups such as ours, these opinions have begun to change.”

Sedláčková noted how the communist system rudely interrupted a Czech tradition of farmers’ markets. Ironically, the shift from communism to chain supermarkets was far easier than reviving grassroots market traditions. And it took a while for post-communist Czechs, enthralled by the new availability of foreign goods, to turn their gaze back towards local produce.

“People have realised that our own Czech traditions also have worth, and they should be supported, for economic and micro-economic reasons too. Promoting or supporting small local producers and growers is imperative. To not only shop in the chain supermarkets and seek the lowest prices, but to take a proactive step for one’s community and support a return towards localised growers and producers.”

Sedláčková and other farmers’ market advocates cite countless reasons why this phenomenon is a plus for the communities which are eagerly hosting them: For one, an almost patriotic sense of supporting the country, or a region. Secondly, the markets can serve a social spaces where people meet fellow members of the community. Visiting a farmers’ market on a weekend can become a social event in itself.

But farmers’ markets still face one major issue – a patchwork of rules regarding what is and what is not actually genuine farmers’ produce. Not all such markets that have sprung up are actual farmers’ markets, and not all produce to be found there is direct from producers.

Associations such as Archetyp and the Farmers’ Market Association push for tight standards on the kind of products that can be sold in these spaces – to avoid wholesale products from posing as something they are not. Iveta Jungová from the Držovice farm explains: 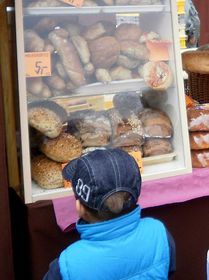 Photo: archive of Radio Prague “I believe that at farmers’ markets, one should only see sellers who have produced what they are selling, and can actually prove that this is the case. In certain cases here, this threshold is not met, as sellers are selling-on products they have bought wholesale. But it is up to those who run the markets to allow this or not. We have seen some stalls go bust because they sold overpriced goods, which you could find in the supermarkets and customers soon wised up to that.”

Šárka Sedláčková described the criteria demanded by her association:

“As a fundamental rule, we do not permit vegetable wholesalers to sell their goods at our farmers’ markets. We demand proof of the origins of the produce. That is the very first question we ask when potential stallholders approach us. If some markets end up allowing in people who cannot prove they are the direct producers, then this should only be allowed in emergency cases, if we really cannot find someone else to fill a particular niche. But that is very unlikely. We have many growers and producers writing to us and there certainly is no shortage of them.”

Despite some teething troubles, and given a little street smarts on the part of the customer, visits to Czech farmers’ markets can be a thoroughly rewarding experience. After a prolonged absence, they appear to once again be reclaiming a proper place in Czech national life. 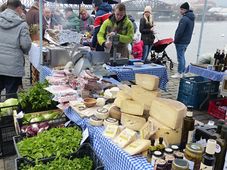 Every environment has its typical background noise. Check-out the atmosphere of a farmers’ market in the Czech Republic and compare… 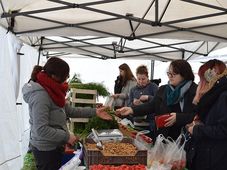 Farmers’ markets, which have proven to be hugely popular across the Czech Republic could be hit by the recent introduction of the new… Čestlice is the name of a small village just outside the eastern city limits of Prague. But it is also the location of a giant out-of-town shopping…