The women’s hockey club HC Slavia Praha last season recruited three foreign hockey players – two of them from a Canadian and one from an American university team - to help boost the level of women’s hockey here in the Czech Republic. Julia Bronson, Stephanie Jones and Carson Duggan have just finished a successful season with their team, which won the Czech league, and are now heading to the women’s hockey finals that are about to take place in Berlin. The three players talk about their experience here, the future of women’s hockey and how they first started playing.

Stephanie Jones: “I started playing hockey at five and have been playing ever since, myself along with the other two, we’ve all played university hockey on scholarships. We’ve also been able to play on the Junior National Teams.”

What about you, Julia? How did you first get started in hockey?

Carson Duggan, photo: www.hc-slavia.cz Julia Bronson: “I have a similar story, I started playing when I was five years old, then I played at the university level, and now we’re here playing.”

Carson Duggan: “I started when I was eight or nine, played all minor hockey, then got a scholarship through university, and now I’m here in Prague.”

And what brought you to Prague? The Czech Republic is pretty famous for hockey, but it’s still quite a leap from the US.

Stephanie Jones: “After graduating from university, I was just sort of looking for something to do with my hockey career, and once you’re done with university, there aren’t a lot of options for women hockey players. So I started looking at different leagues around Europe, and saw a few different leagues. We just kind of fell into Prague, got in touch with the manager of HC Slavia Praha and he brought us here.”

What did you know about the country prior to coming here?

Julia Bronson: “We knew that Jaromír Jágr was from the Czech Republic (laughs).”

And then once you came here and touched down in Prague, what was your first impression? Did you have a night out and were you able to get to know the culture a bit?

Carson Duggan: “It’s funny actually, one of our first days here, we got a tour of Prague. We came there from Kralupy, a small town outside of Prague where we were training in, and we came up the steps by Wenceslas Square, and just coming up those stairs and seeing the statue and the street was great. It’s a gorgeous city.”

Stephanie Jones, photo: www.hc-slavia.cz And Julia, your trainer doesn’t speak any Czech, and I’d imagine it would be hard for you to learn Czech this quickly, so how do you communicate?

Julia Bronson: “It’s funny you ask that, we like to use a lot of charades at times. We actually have another team mate who is bilingual, and so she will literally sit in the locker room with us and translate everything that he says and then, if he needs a response from us, she will translate what we say. Other than that, besides smiles and winks, that’s about all the communication we manage.”

What about other team members, do they speak some basic English? Are you able to get the team spirit going despite the language barrier?

Stephanie Jones: “No, there are a handful of girls who speak enough English so that we can have a basic conversation and get some jokes going back and forth. There definitely is a team atmosphere, despite the language barrier.”

You’ve played one season so far with the HC Club Slavia Praha. What were the highlights, the lows, and the in-betweens?

Julia Bronson: “I’d say the season went well, we won the Czech league. We are going to the finals in Berlin this weekend. The only negative aspect is our inability to really communicate. But you’d be surprised at how universal some things are. So we’ve had a great time, met lots of good player. We wish we could help them more with their hockey, because it’s a different type of hockey than we play. But we are learning a lot from them, too.”

Carson, maybe you can explain the differences between American and European hockey?

Julia Bronson, photo: www.hc-slavia.cz So is hockey one of the women’s sports that has quite the following or is it still relatively obscure?

Stephanie Jones: “Women’s hockey here I think is just starting to get noticed and recognized. I think now that it has been in the Olympics for a couple of years, people are starting to see it more and it’s more recognized as a sport. But it’s still growing, I think North America is a bit ahead in terms of how common women’s hockey is, but that’s just something that is going to take time. And people will recognize that a lot of women do play hockey here and that we have a lot of great women hockey players here.”

How do you finance your stay here? Are you paid for your work?

Julia Bronson: “A little bit of both. Our living costs are covered but we also have a job on the side at a preschool and nursery.”

I believe you are going to the finals in Berlin very soon. Are you looking forward to it?

Carson Duggan: Yes, we take off on Thursday and we are playing as one of the top four teams in Europe, so it’s the team from Berlin, then Russia and Finnland. And I think there is going to be a lot of great hockey and it may be tough, but if we put the right games together, we should be successful.

During the season, how much of your day goes to training?

Stephanie Jones: We practice about three times a week for an hour, and then we have one or two games per week and on top of that, we try to make it to the gym or go for a run, so we are going to be in good shape for the finals.

You guys also all live together. Isn’t that a bit too intense sometimes, playing together, working together and then on top of that living together? 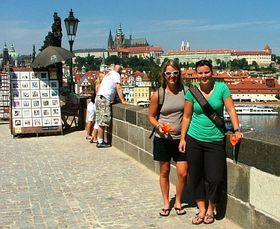 Carson Duggan, Stephanie Jones (right), photo: www.hc-slavia.cz Julia Bronson: “Actually, it worked out perfectly, our personalities mesh unbelievably well and we really balance each other out. We haven’t had any problems, even when we were playing, and we all play in the same line. But I think if anything, it’s even helped our game.”

Do you plan to stay here? Can you see yourself becoming involved in hockey in the Czech Republic in the long run?

Stephanie Jones: “I’ve really enjoyed my time here so far, but I think it’d be hard to stay here in the long run because of the language barrier.”

And how is the Czech Republic measuring up against the US when it comes to beer?

Stephanie Jones: “They have exceeded, we’ve really enjoyed the beer. Us hockey players, we like our beer. I’m really very happy with the beer. It’s the best I’ve ever had.”

Has that helped the communication at all?

Julia Bronson: “I’d like to say it definitely does. Some of our team mates who claim they don’t speak any English at the end of the night will speak perfect English, and allegedly, I might know a few sentences in Czech after a few beers.”