Last Saturday Trabant fans from around the country descended on Prague’s Motol district, in the western suburbs of the city, for the opening of the one-and-only Trabant Museum in the Czech Republic. The small two-cylinder vehicle born in communist East-Germany as an affordable car for the masses was neither affordable, nor easily accessible, but somehow or other the smoke-belching, sluggish Trabi has won many people’s hearts and still has fan clubs around the world. 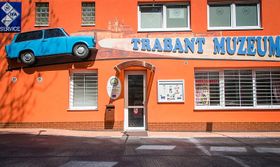 Photo: archive of Martin Hucl The first Trabi left the factory gates of the plant in Zwickau in 1957. Its makers promised an “agile, fast, robust and long-lasting vehicle”. While one could arguably question the validity of all those claims the latter has definitely proved true. Its simple design made it easy to maintain and owners repaired it using a few basic tools. According to those in the know drivers carried a replacement belt and sparks plugs at all times and fixed their Trabi on the road whenever the need arose. The founder of the Trabant Museum and an ardent collector of all things Trabi, Martin Hucl says this DIY service is what made the car special to so many owners.

“It is really a very simple car. The motor is cooled by air so there are no problems with cooling and it is simple enough for drivers to be able to fix by themselves. The only problem is with rust because of its metal frame. If you leave it standing outside for years it will corrode. But if you care for it and give it a bit of maintenance it is practically an indestructible vehicle.”

“It is really a very simple car, but if you care for it and give it a bit of maintenance it is practically an indestructible vehicle.”

While it has a metal frame, the body is made of something called Duroplast –a form of hardened plastic made of cotton waste from Russia and resins from the East German dye industry. Although this has evoked comparisons with an amusement park bumper car, surprisingly the Trabi has done well in crash tests, actually proving superior to some modern small hatchbacks. Between 1957 and 1991 the Trabi plant at Zwickau produced 3.7 million vehicles. Today there are still close to 60,000 Trabis in use in Germany and over 21,000 of them whizzing along Czech roads at a maximum speed of 100km per hour. They are usually hard to miss since their owners invest considerable time and money into tuning and “personalizing” them.

I asked Martin Hucl what sparked his interest in the Trabi. 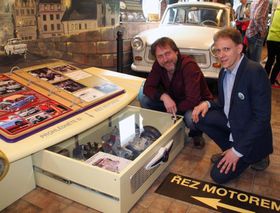 Dan Přibáň, Martin Hucl, photo: archive of Martin Hucl “I come from a Trabi family. My mother took part in Trabi rallies before I was born and my grandfather (Viktor Mraz) was one of the best-known post-war race drivers. He actually founded Trabi rallies in Czechoslovakia and established contacts with the plant that produced them. So I guess it was predestined really.”

Martin Hucl has several Trabis in his collection and he acquired a few more in order to open the Trabi Museum at Motol. There are seven Trabis inside, and several more outside, all painted in bright colours, some of them still wearing their “racing coats” from the heyday of Trabi rallies. In one glass case Martin Hucl has displayed his mum’s trophies and even the shoes she used to wear to races. In the late 60s and early 70s Helena Huclova turned heads – there weren’t many female race drivers in communist Czechoslovakia. The collection of Trabis includes a bright pink racing car with only one seat in front which last took to the road –or rather to the race track - in 1990. 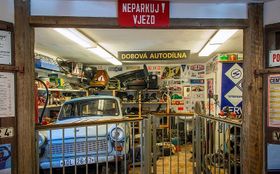 Photo: archive of Martin Hucl Another exposition shows a service garage dating back to the 70s with a Trabi being serviced by a dummy mechanic lying under the car. Martin Hucl says that many male visitors spend a long while here recognizing with nostalgia the products and equipment on the shelves, all of which were considered a luxury in the communist days. It was Martin’s aim to fill the museum not just with Trabis but also with related accessories of the time that would reflect the quasi-culture of the Trabi heyday. For instance there are old newspapers on the front seat and a pack of cigarettes from the 70’s on the dashboard.

One section is devoted to Trabi holidays and a Trabi trailer. The trailer is chock full of the items that people would take on a camping trip around the country, tin cans, biscuits, drinks and sports gear dating back to the 60s and 70s. The trailer itself is unique having been constructed from the back of an old Trabi. Martin Hucl explains: Photo: archive of Martin Hucl “Most of these trailers were DIY jobs made at home or at some small servicing station. Trailers were luxury goods at the time, most of the time they were simply unavailable, so when someone needed a trailer it was usually made from an old Trabi.”

This is not to say that used Trabis came cheap – in fact a used Trabi in good shape was often more expensive than a brand new one –for a very simple reason. A used Trabi could be acquired without a long wait. Martin Hucl again:

“In East Germany people waited ten to fifteen years for a Trabant, in Czechoslovakia it was three to five years. But before that people often waited in line all night in order to register to buy the vehicle. As for the price I remember it cost 25 thousand crowns at a time when the average pay was around 1,000 so it meant saving up for more than a year.”

“In Czechoslovakia it took three to five years to get a Trabi, and people often waited in line all night in order to register to buy one.”

One of the Trabis exhibited is actually an open cabin allowing people to get behind the wheel to get the feel of what it was like to drive a Trabi – and change gear with the gear stick placed close to the wheel –where today one would find the windshield wipers control. There is a wall painting of a Trabi on Charles Bridge and another that is a copy of a part of the Berlin Wall. The Trabi in front of it is open and an invitation for visitors to take a picture that will look like it was made in front of the Berlin Wall.

Another popular exposition is the one featuring a dark green military Trabi.

“The military Trabi was made for the army and was used largely by border patrol guards. It is made like a cabriolet and it has the same motor as the classic Trabi, goes at the same speed, no special tuning or greater durability in difficult terrain – there is just one exception – the back is reinforced, it is metal-plated, there is less Duroplast –and the general impression is that of a cabriolet.” 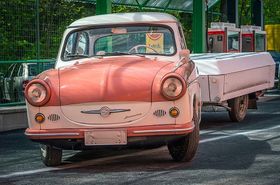 Photo: archive of Martin Hucl The most modern Trabi at the exhibition was produced in 1990 at a new plant which was expected to give the Tarbi a new lease on life. However with the fall of communism in 1989 there was a hunger for Western cars and products and the market quickly dried up. The last Trabant rolled off the production line on April 30th 1991. The Trabi’s heyday was well and truly over and the plastic car that people lined up all night to register for became the butt of jokes and ridicule. However its staunch fans remain faithful and are determined to keep the sturdy little plastic car on the road for as long as environmental norms allow. They claim the Trabi is a fighter which will not let you down in a crisis. Among those out to prove that the Trabi can take on the toughest challenge are a group of four adventure loving young Czechs who chose the Trabant for gruelling expeditions across Central Asia, Africa and South America and most recently Australia and South East Asia. And against all the odds they and their Trabis always made it back home safely. 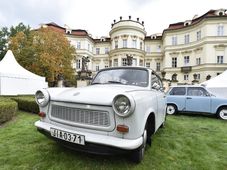 The Way to Freedom 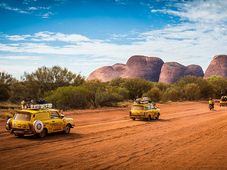 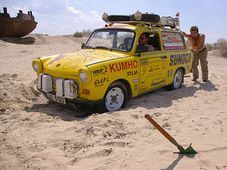 Members of a Czech-led expedition traveling in Fiats, Jawa motorcycles, and Trabants across Australia and Southeast Asia, have returned…