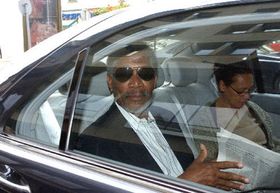 Morgan Freeman, photo: CTK The arrival of American actor Morgan Freeman at the Karlovy Vary Film Festival has made all of today's front pages, and cinemagoers who have failed to make it to the West Bohemian spa resort for the annual film festival can take comfort from reading up on all the latest news and gossip about the films and VIPS in the cultural pages.

There is an explosive headline on the front page of Lidove Noviny quoting the President of the UN General Assembly Jan Kavan as having accused the US administration of discriminating against members of his family. The paper reports that Mr. Kavan, a former Czech foreign minister, complained to the Financial Times that his son and his son's girlfriend had been refused US visas because of Mr. Kavan's anti-war stand on Iraq.

Pravo, however, is a step ahead and says that the matter has been satisfactorily resolved, saying the couple have been granted visas and Mr. Kavan has admitted he may have been overhasty in his assessment. The US consulate in Prague has also told the paper that the delay in granting the respective visas was due to technicalities that had nothing at all to do with Mr. Kavan's political views.

All the papers report - in a fairly route manner - on the latest details of the government's reform package. The reform has filled front pages for weeks now and there are no major surprises left. Mlada Fronta Dnes says that trade unions are determined to prevent the passage of this reform through Parliament and have swapped their traditional allies in the governing Social Democratic Party for the more radical Communists. "Unions ally with communists against the government" reads a headline in Mlada Fronta Dnes.

According to the paper neither of the two opposition parties in Parliament - the centre right Civic Democrats or the Communists -are prepared to support the government's reform plan and the governing coalition will thus have to rely on every single vote it has in the Lower House. The Civic Democrats claim to have a team of experts working on an alternative reform plan in the event of early elections but, Mlada Fronta Dnes says, the party has nothing to show the public yet - either that or they are keeping it well under wraps.

Meanwhile, Pravo has an attention grabber on its front page - relating to a TV ad broadcast on Sunday -a national holiday in the Czech Republic in commemoration of Jan Hus, a reformer priest who was burnt at the stake in 1415. A TV ad showing a sausage being roasted over a campfire while a voice over says "you commemorate Jan Hus just one day of the year but you can enjoy our product every day" has enraged many Czech viewers, Pravo says.

Some critics have reportedly asked the Association of Czech advertising agencies to look into the matter. Meanwhile, the agency which produced the ad is trying to vindicate itself by saying that it felt that this angle would appeal to the Czech sense of humour.

And finally, Mlada Fronta Dnes has devoted a full page to a problem that does not as a rule rate a great deal of attention in the Czech media - that of parents who abduct their own children. The paper reports that there are several cases of this happening every year and in most cases the other parent is left without any information as to the child's whereabouts or wellbeing. This is documented by a list of children who are still missing, some having disappeared as far back as 1994.