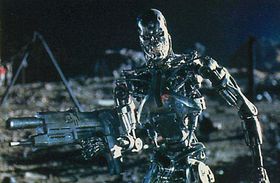 Terminator 2There is one name for success in all of today's papers and that name is Arnold: Czech headlines read "Shwarzenegger on top in California", "Arnold wins", and "Terminator turns governor" after the 56-year-old actor successfully swept the governor's race in the sunny U.S. state. 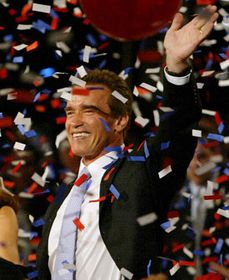 Meanwhile, a more sombre mood in the Czech Republic now that the numbers are in: Wednesday the Ministry for Labour and Social Affairs revealed that unemployment in the country has risen to its highest level in seven months. MLADA FRONTA DNES writes that 530, 000 are now registered unemployed, an increase of more than 4, 000 since August. According to the paper, some officials expect the unemployment figure to rise even more, as high as 10.3 percent. If that comes about it will be the highest figure for unemployment ever in the Czech Republic's history.

If you can't run, at least hide. But not in Prague's metro. Thursday's PRAVO writes that the government is interested in renewing the metro's capability to be used as a bunker. Prague's metro - built under the communists - was once touted as being able to act as a shelter from nuclear fallout, a myth dispelled when the system was penetrated last year's by extensive floods. The government has put 140 million crowns aside for the renewal project, saying that sum was a quarter of what the project would cost. Some experts believe, however, the bill for modernising the system will go much higher - as much as a billion crowns. As yet, the paper indicates, it remains unclear just how the project will go forward.

Staying with PRAVO we turn to the story of a boy who disappeared on Tuesday - prompting the mobilisation of a search and rescue team involving helicopters and some 80 police officers. It turns out he has turned up safe. The paper writes that instead of going home after school the twelve-year-old went to a classmate's where he spent the evening playing computer games. Playing late they decided he spend the night. He was only picked up by police walking home the next day. That, at least, is a happy ending in contrast to a similar incident in the Trutnov region in April, where a two-and-a-half year old disappeared only to be found lifeless some eight kilometres from home.

Police officers paid final respects on Wednesday to their colleague, 25-year-old Martin Rusnok, who was killed on duty last weekend, along with two colleagues, when they were mowed down by a drunk driver. 29-year-old Zdenek Bulawa was behind the wheel of his Mercedes when he plowed into the officers' car. In hospital with a broken leg, Bulawa now awaits trial and up to ten years in jail. LIDOVE NOVINY writes he is being monitored by police, and adds he will also be charged with blackmail, apparently trying to influence witnesses. His companion in the car, a seventeen-year-old girl has also been taken into custody: she may soon be charged for failing to provide aid at the scene of the accident.

Finally, for this day, LIDOVE NOVINY writes that former president Vaclav Havel will be honoured in parliament next week, when he will receive both the Order of the White Lion and the Order of T.G. Masaryk. He will be given the honours by the head of the senate Petr Pithart and speaker of parliament Lubomir Zaoralek. The prizes are the highest state honours one can receive in the Czech Republic. Among the guests expected to attend will be Ivan Medek, former head of the president's office. Conspicuously absent will be current president Vaclav Klaus, who will be on a three-day visit to the Pilsen region.