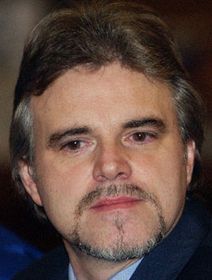 Karel Srba, photo: CTK Two stories dominate today's front pages: Thursday's appeals hearing in the case of former Foreign Ministry official Karel Srba and the probable end of short-term work contracts. LIDOVE NOVINY and PRAVO lead with the verdict of the Prague High Court which on Thursday rejected the appeals of Karel Srba and his four accomplices; a lower court had previously found them guilty of plotting to murder an investigative journalist.

The case was closely watched by the media from the very start and the whole thing was supposed to culminate in a live television broadcast of the appeals hearing on Thursday. But Czech Television's attempt to create a precedent failed, PRAVO writes. Two defendants voiced their objections to the live coverage and the court panel decided to end the broadcast within half an hour.

Onto MLADA FRONTA DNES, and the paper leads with Thursday's lower house approval of a bill which bans employers from repeatedly giving employees work contracts for a limited period of time. "Mrs Cizkova from Hradec Kralove works in a car factory," writes MLADA FRONTA DNES. This year she signed her sixth six-month contract in three years - all with the same company.

No bank will give Mrs Cizkova a loan; she cannot afford to fall ill. As of next year, things should improve for Mrs Cizkova and all those whose employers have been denying them permanent contracts, writes MLADA FRONTA DNES. The lower house of parliament passed a bill which puts a limit to short-term contracts. If the Senate approves the bill, companies will have to grant permanent contracts to people whom they have been employing on a short-term basis for two years.

Our wallets and purses will be lighter as of Saturday, as the Czech National Bank has decided to discontinue ten and twenty-heller coins. There are around 1.2 billion of those coins in circulation and their total weight is well over 800 tonnes, writes LIDOVE NOVINY. Once they are withdrawn from circulation, the coins will go to Czech Mint and will be crushed and sold as scrap metal. The paper estimates the value of such an amount of scrap aluminium at around 33 million crowns.

Onto economic matters, and PRAVO writes that the Czech Republic is the hottest candidate as a location for a new car factory which the South Korean company Hyundai Motor which is planning to build in the region. PRAVO quotes a Hyundai representative as saying that the Czech Republic emerged as the strongest candidate thanks to various factors. The factory is estimated to produce 300,000 cars and provide jobs for up to 4,000 people. The investments should amount to 1.5 million dollars.

And finally, MLADA FRONTA DNES says that Miroslav Grebenicek's position at the head of the Communist Party is unstable. After ten years under Mr Grebenicek's leadership, it is time for a change, many party members think. MLADA FRONTA DNES writes that a faction within the party would like to see Miroslav Grebenicek "put out to pasture" in the European Parliament in Brussels. According to the daily, Mr Grebenicek is seen as a "Stalinist-type politician" by a small faction which is trying to modernise the image of the Communist Party.

A high-ranking communist, who wished to remain nameless, told MLADA FRONTA DNES that Mr Grebenicek had been given an ultimatum: either he agrees to run for the European Parliament or he risks being brought down by force. The Communist Party congress is scheduled for next May; the election to the European Parliament will take place one month later.