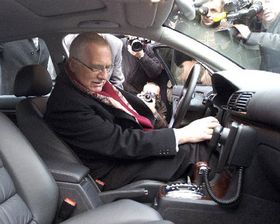 PRAVO writes that President Klaus threw down the gauntlet to Czech politicians when he took delivery of a luxury Skoda Superb limousine on Thursday from representatives of the Skoda car works from the town of Mlada Boleslav. Most Czech officials drive German cars: BMWs, Audis and Mercedes. "I can't imagine an Italian politician driving a car which wasn't made in Italy or a French politician not using a French car," President Klaus explained.

According to PRAVO, Mr Klaus' predecessor, Vaclav Havel, was keen on Mercedes and the paper quotes him as saying recently that Skodas were German cars, only manufactured in the Czech Republic. However, PRAVO continues, Skoda is perceived abroad as a Czech brand, and besides, even the most expensive Skoda Superb model is three times cheaper than a luxury BMW or Mercedes.

"We know lives will be at stake", reads the main headline in MLADA FRONTA DNES. Parliament has decided to send Czech troops on foreign missions from which not all of them may come back, the paper writes. Eighty military police will leave for Iraq in two days, which means they will spend Christmas without their families at a base near the city of Basra. The paper says that the Czech military police will help train the local police but also guard police buildings and escort convoys - which are both currently the most frequent targets of terrorist attacks.

Staying with MLADA FRONTA DNES, and the paper writes that Czechs injured by Soviet troops during the 1968 invasion and the families of victims may finally receive compensation. The lower house is debating a proposal to offer financial compensation to people affected by the invasion and the years that followed it. According to statistics, between August 21 and September 9, 1968, the occupiers killed 72 people and seriously injured 266.

If the bill is passed, writes MLADA FRONTA DNES, those who suffered at the hands of the Soviet occupiers will have until the end of 2006 to apply, and will have to provide a medical report, death certificate or testimony. Families of people killed in the invasion should receive 1,000,000 crowns, those seriously injured or their families would be granted 500,000 crowns and for a light injury, the compensation should amount to 100,000 crowns.

Shop assistants in hypermarkets are protesting against Christmas carols, writes LIDOVE NOVINY. Trade unions are discussing shop assistants' complaints that having to listen to Christmas songs played over and over again all day is becoming unbearable. The workers are demanding either financial compensation or a limit to be put on the amount of time stores can play Christmas carols.

The paper quotes a union representative as saying that not only shop assistants but also some customers are becoming sick of having to listen to Christmas songs. While customers usually spend less than two hours in a hypermarket, shop assistants have to put up with the music for up to ten hours a day.