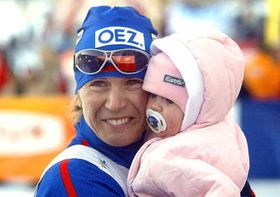 Katerina Neumannova, photo: CTK Although all the main dailies lead with different stories today, they all feature the same photo of Czech cross-country skier Katerina Neumannova hugging her baby after winning a competition in Austria just five months after giving birth.

MLADA FRONTA DNES looks at the plight of the residents of the Bohemian towns of Chomutov and Jirkov who have been without warm water and heating since Friday night. The paper warns that over the winter period this could happen to about three million more people who are dependent on central heating as many towns have power stations and pipes that are old and in dire need of repair. What makes matters worse, the paper adds, is that the region was recently hit by the flu and doctors fear the residents' weakened immune systems could be affected, resulting in a bad flu epidemic.

Czechs have spent a billion crowns this year, writes LIDOVE NOVINY, adding that businesses recorded the highest pre-Christmas profit ever last weekend. David Marek from Patria Online tells the paper that Czechs spent seven percent more money on Christmas gifts than last year. If divided among each and every citizen in the country, this would mean that each one spent 8,300 crowns (a little under 300 US dollars) in December.

HOSPODARSKE NOVINY looks at this same development and notes that people have been buying more because they can afford more thanks to growing salaries. This year the salaries increased by about one thousand crowns, while there has not been a notable change in prices. Typical Christmas goods such as Christmas trees, carp, and traditional presents are not any more expensive than last year and prices of electrical appliances such as microwaves and mobile phones have even gone down, the paper concludes.

PRAVO features the results of a public opinion poll on the popularity of parliamentary parties released by the STEM agency this weekend. The opposition Civic Democrats came in first with 35 percent. Just as past opinion polls have suggested, the Communists are second on the popularity ladder with 17.8 percent. They are followed by the Social Democrats, the senior ruling coalition party, which gets 15.5 percent and finally the Christian Democrats and the Freedom Union. The paper notes that the results show the opposition Civic Democrats now have a record amount of public support and just need to enter in a coalition with a small party such as the Christian Democrats to form a new government. The last time the Civic Democrats got this much support in a poll was eight years ago, writes PRAVO.

MLADA FRONTA DNES has bad news for those women who would like to be able to choose how and where they give birth. Those who plan to give birth to their children at home with the help of only a midwife will most likely have to give up that wish. Doctors have been calling for a law to be put in place that prohibits birth without the presence of a doctor and outside a hospital, arguing that the lives of both the mother and child would be at risk should there be unexpected complications. A new law that passed through the lower house and is most likely to get the approval of the Senate and the President does not allow midwives to work without doctors, the paper writes.