Every one of the Czech dailies leads on Friday with the sentencing of Petr Smetka, head of the fraudulent building company H-System, to 12 years in prisoin. Mr Smetka is shown in a variety of poses in front page photographs, though in none of them does he betray much emotion. 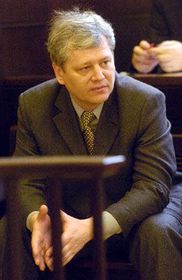 Petr Smetka, photo: CTK Mlada Fronta Dnes has been gauging the opinions of Czech youth, in a specially-commissioned poll of 1,000 secondary school students. The person they most admired was Czechoslovakia's founder T.G. Masaryk, followed by a more recent president, Vaclav Havel.

His successor Vaclav Klaus is also popular with young people. By contrast, among their least favourite politicians are Communist Party head Miroslav Grebenicek and Prime Minister Vladimir Spidla. Two-thirds of the newspaper poll's respondents said they did not agree with Mr Spidla's reforms. The Czech Republic's imminent accession to the European Union is, however, popular with the country's youth: 80 percent said they were for it.

Hospodarske Noviny reports that the Czech Republic's retail trade unions are pushing for a new law which would ban shops from staying open all night or on state holidays. It is the first attempt to limit shop opening hours since 1992. Under the proposal only corner shops, petrol stations and chemists would be allowed to stay open after ten o'clock in the evening, though it does not include any special restrictions on Saturdays or Sundays.

Several MPs - from Communists to members of the right-wing Freedom Union - have come out in favour of the change, while the Civic Democrats are resolutely opposed; the party's Ivan Langer describes the idea as a "ten-year step backwards", reports the daily.

Lidove Noviny's "Friday" supplement carries a long interview with Petr Cibulka, best known for publishing in 1992 an unofficial list of communist era secret police StB agents and their collaborators. Mr Cibulka, who spent five years in communist prisons, divides the era's dissidents into two categories: those like Vaclav Havel and Svatopluk Karasek, who were well known, were "protected animals"; "nameless" opponents of the regime, however, were dealt with much more severely, he says.

The tabloid Blesk reports on high drama in the town of Liberec on Wednesday, when a man climbed to the top of a 50-metre high crane and threatened to jump to his death. The man - who expressed dissatisfaction with the Czech Republic's tax rates, rate of unemployment and his own personal finances - told police he wanted to talk to the town's mayor in front of television cameras. Mayor Jiri Kittner negotiated with the 31-year-old man, eventually persuading him to come down.

A "census" of the homeless was held in Prague on Thursday, reports Mlada Fronta Dnes. Over 300 volunteers combed the city's parks, as well as final metro and tram stops and Ruzyne airport. The volunteers had been told to watch out for people wearing dirty clothes, ill-matching clothes or carrying plastic bags.