Welcome to Czech Science. Last week Professor Jan Palous from the Astronomical Institute of the Czech Academy of Sciences talked about Czech-born astronomers who left Czechoslovakia during the communist era and made their careers at foreign universities and research centres. Today Professor Palous will be talking about Czech participation in one important part of space research - manned missions to outer space.

And we may soon be hearing more about Czechoslovakia's first cosmonaut Vladimir Remek, as he is one of the Communist Party's top candidates in June's elections to the European Parliament.

Although Vladimir Remek is the only man this country has ever sent into outer space, he is not the only astronaut of Czech origin. Professor Palous.

"There are more names coming from the Czech Republic. We like to invite them and let them remember their roots, their Czechoslovak roots. This is, for instance, well-known American astronaut Eugene Cernan who was on the surface of the Moon and he also brought there the Czechoslovak flag. We have it at the Ondrejov observatory. The flag was donated to us by Eugene Cernan who had brought it to the Moon and back again."

Eugene Cernan, the second American to walk in space and the last to walk on the Moon, and Vladimir Remek, the only Czech cosmonaut, met in October 2001 in Prague. When they were travelling to the hometown of Mr Cernan's grandfather, some 100 kilometres south of Prague, their helicopter crashed during an emergency landing. Luckily, both astronauts escaped uninjured. 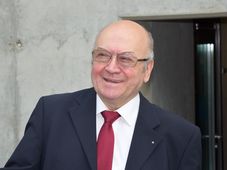 Only Czech in space Remek recalls historic flight, 40 years on

Friday is the 40th anniversary of the day Vladimír Remek became the first, and so far only, Czech in space. In fact the cosmonaut was… 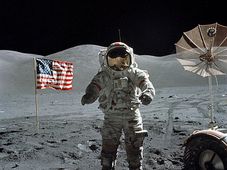 US astronaut Eugene Cernan, the last person to set foot on the Moon, died on Monday at the age of 82. Cernan was the commander of the…