Music is an essential part of the unique Christmas atmosphere. Along with the scent of frankincense and spices, fried carp on the Christmas Eve table, the candles, baubles and mistletoe – traditional music is what makes Czech Christmas complete. Besides Advent and Christmas church music, including the “Czech Christmas Mass” by Jakub Jan Ryba, the local Christmas musical heritage also abounds in folk songs and carols. 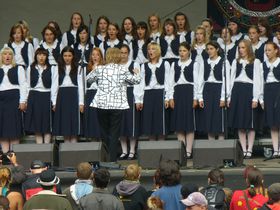 Bambini di Praga, photo: Cheva, Public Domain Collected mainly during the National Revival in the 19th century all around the country, they have been adapted many times for various choirs, bands and music ensembles. In this special programme we will feature Bohemian and Moravian folk carols recorded by the renowned Prague-based children’s choir Bambini di Praga, accompanied by the Musica Rustica ensemble and the Moravian folk rock band Hradišťan.