As always in the weeks preceding Christmas, Jews around the world begin the holiday season before their Christian neighbors. The story of Chanukah is not in the sacred texts of the Torah, and those who celebrate it, do so most often at home, eating various foods fried in olive oil, playing games with chocolate Hanukah gelt (chocolate coins), and receiving presents each of the eight nights of the festival. Some, though, prefer to share this holiday of light, as it is called, with others. To see how it is celebrated around Prague, I headed to a creative workshop organized by the city’s Jewish Museum. 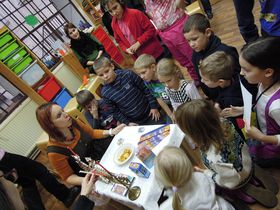 Zuzana Pavlovská lights the Chanukah candles with the children, photo: Masha Volynsky The workshop’s organizer Zuzana Pavlovská welcomed the kids, some as young as four and some in their teens, who were arriving on this cold Sunday with parents and grandparents in tow. She and her colleague Helena hold workshops for kids once a month on Sundays, and it was lucky that this year, the last workshop of the year fell on the second night of Hanukah.

Although these creative afternoons are all focused on Jewish traditions and history, Zuzana says they do not necessarily cater only to Jewish participants:

“We have these workshops for the public, for kids. They don’t have to be Jewish. It’s about teaching them the tradition of the Jewish people. We try to celebrate all the holidays with them. And we discover different parts of the Torah scroll together. It’s just to spread the tradition to children in the Czech Republic – a tradition that has been here since the 9th century.”

Zuzana and Helena tell the kids the story of the holiday of the Macabees and the oil that lasted eight days instead of just one. Some join in or listen attentively, but most of them eagerly await the start of the fun – singing, making cut-out dreidel spinning tops, menorahs and, of course, snacks. Helena Bönischová and Zuzana Pavlovská, photo: Masha Volynsky “I think it’s very important for the children to see that there are other traditions besides Christmas, and that there are other cultures. Maybe if we educate them about the other traditions and other people, they will be more tolerant later on in life. Or they will just know that these things are connected with Judaism. And when they see the Hanukkiah menorah in front of the Rudolfinum, which is there every year, they will know that this is connected to the Jewish tradition.”

One mother I spoke to agreed with Zuzana. She is not Jewish, but she says her two young sons really enjoyed the workshops from the very first time they attended one in the beginning of the year:

“The boys really like it, they want to come here themselves, and they always look forward to the next time. I think that even if a person is not Jewish, this is still part of a culture that one should know about. This is a wonderful and very easygoing way to show these traditions to kids. And I have to admit, I myself don’t know much about these traditions, so I am learning a lot too.”

As most parents were eagerly helping their kids cut out menorah flames and color in pictures of dreidels, I noticed a man in the back of the room smiling jubilantly as he watched bits of colored paper flying around him. I asked him who he came here with: 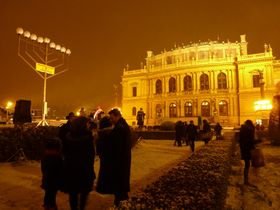 The menorah in front of the Rudolfinum before the lighting ceremony, photo: Masha Volynsky “Well, I have a child and a grandchild here. My child is 32 and my granddaughter is four. This is our first time here, because she just turned four. And I’ve been looking forward to it for quite a long time.”

I wondered what the root of this excitement was, and asked he had a chance to introduce his children to Jewish traditions when they were little:

“We had to do it covertly, because it was a different time. They couldn’t speak about the same things in school as they did at home. They couldn’t say they were Jewish. I told them this before they started first grade and I knew I could trust them. Myself, I started school in 1953, and it was the same for me.”

Before the children got to enjoy the well-deserved jelly doughnuts – or Sufganyot – Zuzana and Helena lit the two candles saying prayers, as adults followed along from papers that were given out to them. The number of religiously observing Jews in the Czech Republic is quite small and Prague’s main Jewish community may be a bit too conservative for some, especially those who are trying to acquaint themselves with the traditions of their ancestors that were suppressed under communism. This is why these kinds of family-friendly activities that introduce Jewish religious and secular traditions in bite-size portions are so important.

Zuzana says that they not only acquaint children with Jewish culture, but also teach some parents about things they did not have a chance to learn when they were growing up:

“There are also some people here who are Jewish, but they are not Orthodox, they are more liberal. They are interested in these types of workshops because they don’t know how to tell their kids about the traditions. Sometimes they converted as adults, so it is also good for them to see how they can celebrate the holidays at home.” 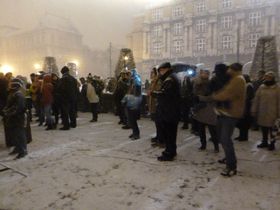 Dozens braved the snow to see the ceremony, photo: Masha Volynsky As snow began to cover Prague’s streets, and the children were finishing up their Sufganyot and juice, I headed to a slightly more formal Hanukah celebration a few streets away on a busy square in front of the Rudolfinum concert hall. The small crowd of locals and tourists – mostly from Israel – braved the snow and the freezing weather to watch public figures light the human-size candles on a giant Hanukkiah menorah on the square. As part of the annual tradition, Rabbi Manish Rabash, who heads Prague’s Chabad community, welcomed distinguished guests at the lighting of the Prague menorah:

“This is the sixteenth year that we have the big menorah here on the square. But it is the first year that we have a special effect – we have a bit of snow. Chanukah is the holiday of lights. Light is a symbol of love, of wisdom of compassion. Light is a symbol of goodness and kindness. The lesson of Chanukah is a universal lesson for all people. Yesterday we witnessed the lighting of the first light of Chanukah, tonight we are here to light the second light of Chanukah.”

Last year’s ceremony sadly coincided with the death of Vaclav Havel. This Sunday, Robert Zimmerman, a public affairs counselor from the US embassy in Prague, used the opportunity to once again remind the audience of the Czechs’ struggle against different forms of oppression.

"Chanukah, as I understand it, is a holiday of hope and struggle. So as we celebrate it in front of the Rudolfinum and Prague Castle and around the corner from what used to be the Gestapo headquarters, let us remember the sacrifices and the hopes of thousands of Czechs who gave up their lives and who fought, in the end peacefully, fifty years of totalitarianism.”

The Israeli ambassador to the Czech Republic Jaakov Lev took the opportunity to reiterate his country’s appreciation of the friendly relations with both the Czech Republic and the United States: “It’s my pleasure to thank all of you today and hope for continued support. Happy Chanukah!” 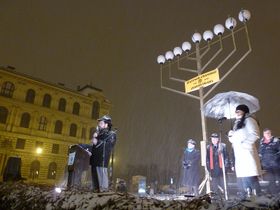 Rabbi Barash, photo: Masha Volynsky Rabbi Rabash, foreign dignitaries, former prime minister Jan Fischer and the mayors of Prague and Prague 1 then lit the candles (hoisted up on a crane platform) while a few dozen onlookers joined in prayer.

Less solemn celebrations are also taking place throughout the week. Prague’s Bejt Simcha community, for example, will be staging a Rock 'n' Roll Chanukah party this Saturday just before the eight-day festivities draw to a close. Even Sunday’s official menorah lighting ended in an impromptu dance party after all the dignitaries departed. The south Moravian town of Mikulov, formerly also known by its German name Nikolsburg, is a popular tourist destination where people… 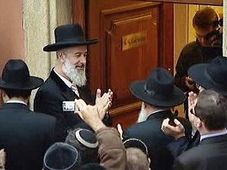