Most people who have visited Prague at least once will almost certainly be familiar with Charles Bridge, commissioned by the Bohemian king and Holy Roman Emperor Charles IV. As a structure, the bridge served a vital role connecting the city joining the historic quarters of Malá Strana (Lesser Quarter) and Prague’s Old and New Towns across the Vltava. Today, it remains one of city’s most important and most visited landmarks. Charles Bridge, photo: CzechTourism According to legend, Charles laid the foundation stone himself at 5:31 in the morning on July 9, 1357. The date and time were said to have been chosen by court astrologers to form a palindromic sequence of ascending and descending numbers (1357-9-7-531). Once complete, the bridge would fully replace the stone Judith Bridge which was destroyed earlier by floods in 1342. One person who knows Charles Bridge better than most is Michaela Graeberová. She captains a ferry on the Vltava for Pražské benátky which also operates Prague’s Charles Bridge Museum. She told me more about the famous commission.

“Charles IV decided that Prague needed a replacement for the former bridge. Obviously at the time, Prague was expanding a lot, having built the new town. There was a lot going on and Prague was also a major hub for merchants in Charles’ day, it was very important to have a functioning bridge connecting both banks. After the Judith collapsed, the monarch decided not to rebuild it but to build a new one next to it.” 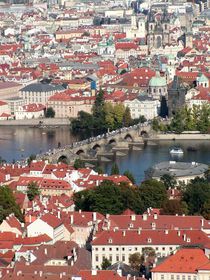 Charles Bridge, photo: Maciej Dembiniok, CC BY-SA 3.0 In the interim, a wooden bridge was erected to join what remained of Judith Bridge… and construction of the new Stone Bridge began.

“It’s almost impossible for regular people in the 21st century to imagine today what enormous effort it took to complete Charles Bridge. Now we have electric tools, the internet, you can google anything. Architects have many different programmes and tools to work with. Yet they did it all without modern technology and it stands until today. That said, the 14th century did see a lot of technological innovation: they even had simple cranes which were up to 12 metres high could move from side to side and lift material of several tonnes. That was very important and quite useful obviously.”

Work on the bridge went ahead but Charles IV died long before its completion; in 1378 while the bridge was finished in 1402. In the 17th and 18th centuries, the first of many famous statues were added which came to define the appearance of the famous structure. Michaela Graeberová again: 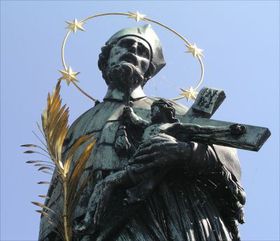 St. John of Nepomuk, photo: archive of Radio Prague Most visitors never realise it is one thing to walk across the Charles Bridge and another to see it by boat from below. Water level, the captain explains, is an entirely different experience.

“I hear it every time I have people on the boat about what a wonderful and different experience it is. It is really very particular when you are on the water level: you have swans taking off around you and flying off and the perspective is fantastic.

“Then we go closer to the weir, which is below the statue of Smetana and there you get the best view. The whole view: the bridge and Prague Castle and St. Vitus Cathedral looming above everything. 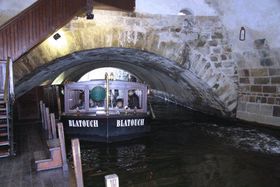 Judith bridge, photo: CommonsRooke, CC BY-SA 3.0 Unported “It is also fantastic when you are below the arches because at some points you can still see the original stone masons’ markings (their ‘signature’ in effect) which were cut down on the top part of the bridge during the Baroque era because they weren’t considered attractive. You can’t see those if you just walk across the bridge.”

The ferry also takes visitors into the shallow Čertovka stream, where remaining pieces of Prague’s first stone bridge, the Judith lies underwater. It takes some skill and knowledge to zigzag the remaining pieces of the bridge which preceded the one standing for centuries since.