An unusual international event is set to kick off in the Czech countryside next weekend. The project will bring together the “tramping” outdoors movement, next year’s centenary of the foundation of Czechoslovakia and the historic Pony Express in the US. It will wrap up in Canberra, Australia next April – and its roots go back to late communism Czechoslovakia. 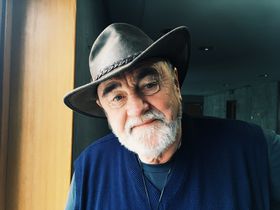 Jindřich Bílek, photo: Ian Willoughby Though the US Pony Express existed as a means of delivering mail for less than two years in the 1860s, the fame of the frontier network has been kept alive by Wild West books and movies.

In this part of the world the phenomenon was one of many aspects of Western culture that sparked the imagination of “tramps” – lovers of campfire songs and outdoor life who made their own freedom of a sort in the forests of Czechoslovakia.

Jindřich Bílek – who arrived for our interview wearing a cowboy hat – has been a devotee of tramping all his life.

“The Wild West is the cornerstone of tramping. It’s also about the ideas of Ernest Thompson Seton and Sir Robert Baden-Powell, as well as the military. But the main thing was the sense of freedom, which we were rather lacking under communism. We weren’t free to travel. Also it was great to just be yourself and walk around in a cowboy hat – it made it clear who you were [laughs].”

Mr. Bílek and a group of friends took their passion for the Wild West to a whole new level in the mid-1980s. Despite living under communism, they decided to organise their own Pony Express ride across the country.

Photo: Petr Zhoř “It was still five years before the Velvet Revolution. We held our first ride as a tribute to all those who had fallen in the Pony Express in the US. The participants liked it so much that they asked if we could do a second ride. And now the Czech Pony Express has been going for 33 years! In the early days we had 60 or 70 riders. I describe them as ‘high-level tramps’. They loved horses and loved nature. It cost a lot to keep horses of course, but it was what they loved.”

In addition to working with horses, the group’s members are enthusiasts for all things Western, says Mr. Bílek. This includes learning “Indiánština” (Native American languages).

Naturally, Czechoslovakia’s Communist regime was suspicious of all things Western. But they left the Pony Express alone.

“We thought we were being heroes, breaking the rules. But today we know we didn’t actually bother them much. Because perestroika was already happening in the USSR and they wanted to show, There’s nothing to criticise here, we’re allowing people to ride around in cowboy hats carrying Colt pistols. By the way, we didn’t need gun licenses in those days – that came later.”

Today Jindřich Bílek is the vice-president for Eastern Europe of the US-based association Westerners International. And he is the architect of a very ambitious project: a Pony Express ride that starts in the Czech Republic next weekend, continues in the United States, and culminates in Australia. It begins at two spots, both promising free country music programmes.

“One part starts in Vyšší Brod in south Bohemia on May 20. Then the second begins in the early hours of May 21 in the small town of Dubá in the Kokořín area – that’s the northern route. And both will meet at Mníšek pod Brdy, the birthplace of the Pony Express idea here and where we regularly go to tramping camps. We’ve got the riders in place – and we can’t wait!”

The horsemen are set to include two from the US and the Czech leg will climax at high noon next Sunday in Mníšek pod Brdy. From there the project will go international.

It’s a rather complicated idea, but essentially it is intended as a tribute to Czechs who in the past settled in the West and the states that took them in.

The timing is also significant as the project will culminate next year – the centenary of the foundation of Czechoslovakia by T.G. Masaryk in 1918.

The concrete tribute involved will come in the form of special letters greeting Czechs and Slovaks abroad and thanking the US and Australian governments and nations. Jindřich Bílek continues. 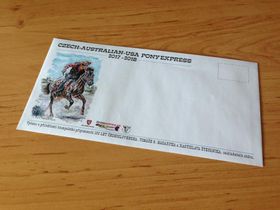 Photo: archive of Radio Prague “We have produced special mailing cards. Essentially they’re just envelopes. The system isn’t actually that complicated. Basically, people sign form letters, send them to us, we put them into these envelopes and carry them on the Pony Express. Then in the end we will deliver them to Washington and Canberra.”

The mail delivered to Mníšek pod Brdy will be flown to the US, where starting on June 5, it will begin a 2,000 mile, 10-day journey across the country.

The ride begins in St. Joseph, Missouri, from where the first ever Pony Express set off in April 1860, and concludes in Sacramento, California.

“It’s a historical ride that still takes place, every year. People even pay to take part in it – to ride one short section. We’ve been working with the National Pony Express Association for many years now and they’ve agreed to let us become involved this time. They’ll take the mail across the US and then from there it goes by boat to Australia, where we’re going to organise another Pony Express.” 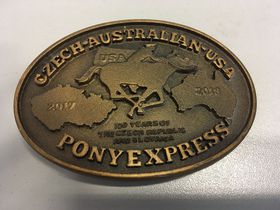 Commemorative belt buckle, photo: archive of Radio Prague After a lengthy gap, the Australian leg will run from the 400-plus kilometres from Sydney to the capital Canberra over two days in April next year. Jindřich Bílek, who is also a seasoned country music promoter, will of course be there.

“I had far bigger plans. I thought I’d bring bands and we’d organise events where we’d speak about Masaryk, screen films, etc. But I found out that all the bands have already been there. The musicians I knew in my youth are all old men now! But our plans have come to the attention of the Czech ambassador in Canberra, who immediately offered us support and help. And if any Czech associations in southern Australia get in contact with us, we’d love to meet up with them.”

Anybody interested in more information about the Pony Express project can write directly to Jindřich Bílek at: bilekjindrich@seznam.cz 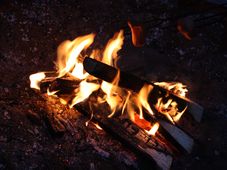 Tramping is a phenomenon that influenced the lives of tens of thousands of Czechs. Young people who dreamed of the freedom of the Wild…

The legendary Czech folk singer Wabi Daněk died last week at the age of 70. In the course of a career spanning close to half a century… 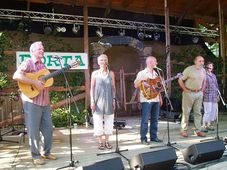 The Czech Republic's biggest festival of country and folk music, Porta, celebrates its 50th birthday this year. Established in 1967…