Czechoslovakia and India through the archives

In this, the last programme in our series to mark Radio Prague’s 80th birthday, we travel eastwards looking at links between India and Czechoslovakia both before and after the Second World War as captured in our archives. In the 1920s and 30s cultural links were strong, despite the huge differences and distance between the two countries, and many of these links survived even in the time of the Cold War. David Vaughan has more. Dušan Zbavitel, photo: archive of Radio Prague A few years ago, not long before his death in 2012, I had the chance to interview Professor Dušan Zbavitel, who during the communist period probably did more than anyone else to keep alive the tradition of Indian studies in Czechoslovakia. He reminded me just how far back Czech-Indian links went.

“The knowledge of Indian languages goes back a very long way in the Czech Lands. For instance, some of the so-called “enlighteners” of the beginning of the 19th century knew and studied Sanskrit. Dobrovský, Jungmann and others considered it their duty to get acquainted with Sanskrit. So the tradition of interest in India was very old and very vivid in our country. I don’t know the reason – nobody knows – but India was very sympathetic for Czech people as a country under foreign rule. It was an English colony until 1947 and the Czechs were under Austria-Hungary until the First World War, so there were mutual sympathies, and our also very much followed the fight of India for freedom – for political freedom.”

The father of Indian studies in Prague was Vincenc Lesný, who, in the first half of the twentieth century, built up the study of Indian languages at the Charles University, along with Moriz Winternitz from Prague’s German University. Lesný and Winternitz were invited to India to lecture at the Visva Bharati University that had been set up by the great Bengali poet Rabindranath Tagore. Lesný was also responsible for two visits that Tagore paid to Prague in the 1920s. Among the many Czechs who went to hear him speak was the composer Leoš Janáček. Dušan Zbavitel again, talking to Radio Prague in 2011.

“At the time, Janáček wrote a column for the paper Lidové noviny, and he put down the intonation of Tagore’s recitation of Bengali poetry. And when Tagore came for the second time in 1928, in our National Theatre two of his plays were performed and in the German Theatre they also performed one of his plays.” Rabindranath Tagore, photo: Public Domain Tagore’s language inspired Janáček to compose one of his best known choral pieces, the “Potulný šílenec” (The Wandering Madman) for mail choir and soprano solo, which puts a story from Tagore’s book The Gardener to music.

Rabindranath Tagore’s visits to Prague were too early to be recorded in our archives, but the poet does turn up again a few years later.

On Christmas Eve 1937, the celebrated Czech writer Karel Čapek sent message over the airwaves to Tagore in Santiniketan in Bengal, and at the same time the inventor of the arc-lamp, František Křižík sent a message to Einstein in Princeton – a gesture of solidarity among democratic nations - all broadcast live to Czechoslovak radio listeners. This is the only surviving recording of Čapek’s voice:

To you, who are the harmonious voice of the East, we send our greetings to Santiniketan. We send our greetings from Czechoslovakia, where the snow is already falling, from an anxious Europe in the Western world, where even the most highly developed nations are unable to shake each other’s hands as brothers would. Regardless of the great distance between our countries, however, we stretch out our hands in brotherly love to you, the poet of wisdom, to you, quiet Santiniketan, to you great India, to you mighty Asia, even to this Asia which is now being destroyed by arms discovered by the West. At this very moment, when cannons are roaring against the east and west of our common continent our Western democracy feebly calls out to you at the turning point of the year: ‘Long live the world, but let it be a world of equal and free people.’

Tagore himself sent a telegram in return, which was read out in English on air.

Friends in Czechoslovakia: In the terrible storm of hated violence raging over humanity, accept the goodwill of an old idealist who clings to his faith in the common destiny of the East and West and all people on the Earth.

We now jump forward two decades to 1957, when India had already been independent for a decade and Czechoslovakia was firmly under the Soviet sphere of influence. Our archives include a recording from New Delhi, from just before the end of 1957. Two of my journalism students from the Anglo-American University, Kristina Zakurdaeva and Valentina Pšeničková, chose to look at the recording as part of their history of journalism course.

KZ: “In September 1957 Czechoslovakia and India signed quite an extensive trade agreement, under which they were cooperating on many issues. The Indian government and the Indo-Czechoslovak Association set up an exhibition –. It took place in New Delhi and was about how Czechoslovakia perceives Indian identity.

We hope to be able to present to you and to the citizens of Delhi an idea of the interest that has been evinced in Czechoslovakia in this country of ours.

Who is actually talking on the recording?

VP: “We hear the chairman of the Indo-Czechoslovak Association, Krishna Rau, and his voice is followed by that of an unknown woman. I had some tips as to who it could be, but it turned out it’s not her. So we don’t know…”

The exhibition has been arranged under the title India in Czechoslovakia and I sincerely believe that those sober documentary photographs will show you, at least to some extent, how Indian philosophy, literature and art are deeply appreciated in my country. The Czech and Slovak translations of Indian literature are a part of all our libraries. The exhibitions of classical and modern Indian art are visited by tens of thousands of people in our country. All the performances of dance and musical ensembles visiting Czechoslovakia are always sold out long in advance.

KZ: “Then we have the Minister of Information and Broadcasting, Balakrishna Vishwanath Keskar:”

When I was a student in Europe, I had the occasion to visit once or twice the beautiful country of Czechoslovakia. Just as to large numbers of people in Czechoslovakia and other European countries India is something very distant and very vague, so it is possible that to a large number of people in this country, Czechoslovakia must be something just on the map. But let me tell my friends in India that Czechoslovakia is one of the most forward and one of the most dynamic centres in Europe that I ever saw. There is no doubt that even before the last war, it was a great intellectual and cultural centre. 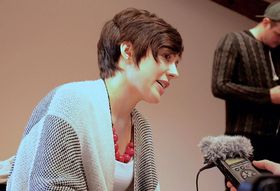 Valentina Pšeničková, photo: Markéta Jirovská Did you manage to get some background information about the relationship between India and the countries of the Soviet Bloc at the time?

KZ: “After gaining independence from the British Empire in 1947, India established diplomatic relations with Czechoslovakia. It was one of the first countries to sign diplomatic agreements. They opened embassies. This was quite a sentimental thing for Indians and Czechoslovaks, because they were united by this feeling of being one country oppressed by another. Especially this trade agreement of 1957 was one of the most important things in re-establishing close ties between the countries.”

This recording, which you chose almost by chance from the Czech Radio archive takes us back to a completely forgotten event 59 years ago. Did you feel it shed some light on the time, on the period of the Cold War or on the history of Czechoslovak-Indian relations, or did you feel it might just as well have stayed there in the archive as something that was not particularly relevant?

VP: “You know, it was just speeches. We didn’t find out anything new.” 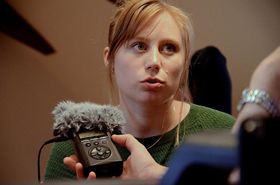 Kristina Zakurdaeva, photo: Markéta Jirovská Today the Czech Republic is able to draw from a history of warm relations with India, which span both the era of communism and the period between the wars. There is little evidence of the depth of empathy that so much characterized the visits of Rabindranath Tagore to Prague nearly a century ago or even at the time when India won independence in 1947, but as trading partners, the two countries are certainly beginning to rediscover their common interests and history.