Havel was destined to lead but acted as one of team during revolution, recalls friend and cohort Žantovský

Among those closest to Václav Havel was Michael Žantovský. The two were among the founders of the opposition Civic Forum in the whirlwind period of the Velvet Revolution, which toppled Czechoslovakia’s Communist regime after four long decades. Soon after Mr. Havel was elected president on December 29 1989, he made Mr. Žantovský his press spokesperson – and part of a team at Prague Castle that had to learn double-quick how to run a country. 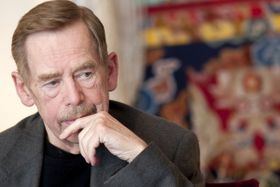 Václav Havel, photo: Filip Jandourek On the occasion of the first anniversary of Václav Havel’s death, I spoke to Michael Žantovský, who is today the Czech ambassador to the UK, on the phone from London. My opening question: when had the two men first met?

“I had known about Mr. Havel for a large part of my life. But I first met him shortly after he was released from prison in 1983 or 1984. I met him through a community of intellectuals, mostly psychologists and psychiatrists. I was a psychologist myself at that time.

“We held more or less clandestine meetings and we also organised a kind of summer camp in the country that Václav came to attend regularly, afterwards.

“We somehow hit it off from the very beginning and we became ever closer as time went by. And by the time of 1989 came we were regular friends and did a lot of things together.”

You were both involved in the formation of Civic Forum, which must have been a really whirlwind period. What are your strongest memories of Mr. Havel from that brief time between the start of the revolution and his inauguration as president?

“As you said yourself, it was a crazy time. We were all busy improvising, because no-one was ready for what was coming. And we didn’t have anything in the way of management in the beginning, so we kind of played it by ear as we went along.

“He was wonderful. It was a series of 18-hour work days for several weeks and he did it all with great humour. He was kind to the people around him. And although many people recognized him as the leader of the whole thing, he just acted as one of the team.”

He instantly became famous; he wasn’t that well known prior to the revolution to most people in the country. What kind of reaction did he get from the public when he travelled around Czechoslovakia at that time? 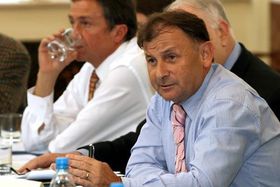 Michael Žantovský, photo: Petr Novák, CC 3.0 license “He wasn’t a household name in most of the country prior to 1989. But I suspect that a large number of people were aware of who he was, and what he did for human rights and freedom in the country.

“Certainly in my generation, maybe half of the people would have been aware of Václav and his significance. So he just didn’t come out of the blue. That’s a myth that needs to be dispelled.”

But how did people react? Was he like a kind of rock star when he turned up at public meetings, for instance?

“Yes, there was a certain rock-star or…carnival atmosphere around the whole revolution. I think it was the emotional high of both the people who tried to organise it and the masses of people that supported it.

“It was this emotional high that helped us to just survive it, because it was so intense and so exhausting that otherwise we couldn’t have done it.

“And he had a very natural way of communicating with people. He was a modest man. He didn’t go in for big dramatics in his speeches and his public appearances. I think people somehow felt that and responded it to it, making him for a time at least something of a rock star.”

You became his press spokesperson in January 1990. I’m sure for all of you it was a very steep learning curve, but for him in particular. How did he cope with suddenly finding himself head of state?

“Well, he was ambivalent about the situation, as is well known. He was not readily enthusiastic about becoming president. He was aware that he was by that time destined to be the leader, but he still was somewhat shy of adopting the official mantle of head of state. 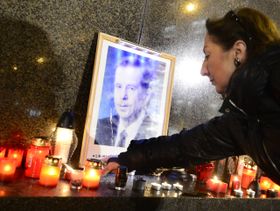 The first anniversary of Václav Havel's death, Prague, December 17 2012, photo: CTK “One of his preconditions for accepting that role was that he would be allowed to bring a group of his friends and advisors and long-time collaborators to the office, and that’s how we ended up in the Castle.

“Again, it was a steep learning curve, as you said, and we were not prepared for it. In retrospect it even seems a little audacious that we thought we could do it. It was the atmosphere and the adrenalin that helped us to learn on the job, and I think that we did eventually get the hang of it.”

What would you say he considered his greatest successes as president of Czechoslovakia and later the Czech Republic?

“I think undoubtedly the restoration of democracy and the creation of a country with all the institutions and a constitution and other paraphernalia, and doing it in a very peaceful, for the most part consensual, fashion would certainly be his greatest accomplishment.

“The other one of course was to bring about the recognition of the transformation, of the changes, to the world outside and to promote the new Czechoslovakia, the Czech Republic, and the post-communist region as a whole, and doing it with such aplomb and eloquence, and bringing it to the point of that part of the world reintegrating with the West in its various structures and organisations such as NATO and the European Union – that would be an accomplishment of equal significance.”

The other side of the same coin, perhaps – what would you say were his greatest disappointments as president?

“I think again the answer to that is clear. He was very unhappy about the division of Czechoslovakia at the end of 1992. He did whatever he thought he could do to prevent it and to argue against it in public. 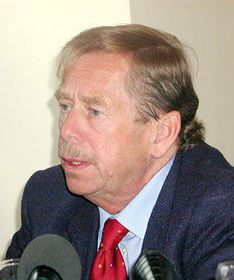 Václav Havel, photo: archive of ČRo 7 - Radio Prague “But eventually when he realised that he was unable to stop it or to prevent it he stepped aside and let it proceed, once again in a very peaceful and amicable fashion. He still considered it his failure and that it was very unfortunate that it happened. But it did.”

He was president for a very long time – 13 years in all. Do you think he found it hard to step down in the end, and to find a new role?

“No. I think at the end of his presidential era he was positively looking forward to being out of the presidency; particularly in later years he did not feel to happy to be the president.

“He thought it was still his responsibility to do it. He had some physical problems, some ailments. After his time in prison especially, he was never a strong man; he was quite frail. I think the role of president was a big burden on him and that he often suffered.

“So by the time it was over he had a feeling of relief and he was looking forward to writing again and doing things as a free person, not imprisoned by the constraints of an official role.

“He did not realise that even after he had ceased being president there would be a large number of official or semi-official demands on his time and attention. People were constantly coming to him with invitations and awards and what not.

“He complained about it a lot, because again it took away from his personal time. But again I think it shows the man that he was, that in the end he most often did it.”

Sometimes people from outside the Czech Republic are surprised to learn that he wasn’t universally loved here, despite all of his great achievements. Why do you think Mr. Havel seemed to have more respect abroad sometimes than in the Czech Republic? 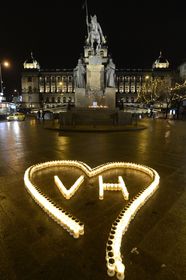 The first anniversary of Václav Havel's death, Prague, December 17 2012, photo: CTK “I think it’s just a measure of politics in general and of the long time he spent in office. Much of that time was very turbulent and at times difficult for the country, because it went through democratic changes, through an economic transformation, the division of the federation, etcetera, etcetera.

“None of it was very easy, and obviously he would be thought responsible and even blamed for some of the things that people didn’t like. I think no-one in that position would have been universally loved after such time. And he was not.

“The other part of it was that he was never afraid to take controversial positions, even when he realised that it would not make him popular or admired.

“But that being said, a year after his death most people realise how important for the country he was, and would have a large degrees of fondness for him and his memory.”

That leads me to my final question. What would you say Václav Havel’s legacy has been, and will be in the future?

“It’s not a single legacy. I think it’s a set of legacies and for the county as such of course the most important thing is that he established it as a democratic rule of law country which is an active part of the international community and is respected as such.

“But he was also a commentator on human rights affairs, not just in Czechoslovakia or the Czech Republic, but in other countries, and even after he ceased being president he remained active in that area.

“He was also a critic of what he saw as the arrogance and hubris of our civilisation, of the immodesty with which we spend our lives and damage our environment and our human relationships. That’s often been forgotten, but I personally believe that this is an equally important part of his legacy.”