Meet the man behind the sets at Barrandov film studios

Prague’s Barrandov Studios have been the centre of the local film industry for over eight decades and in recent years have hosted shooting on major Hollywood hits like Mission Impossible and Casino Royale. In this report we speak to the head of Barrandov’s set construction unit, a team that has been a key element in the studios’ success. 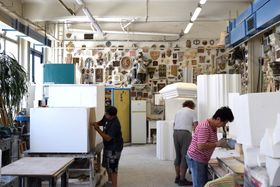 Photo: Ondřej Tomšů Barrandov Studios’ set construction unit has been a bigfactor in its success in attracting major projects such as Les Miserables, Oliver Twist and a long list of other films and TV series in recent years.

The unit is headed by Štěpán Červený, who says his profession has changed since the early days of the Barrandov Studios back in the 1930s.

“In the past there used to be film architects, who understood how sets were built. That means they weren’t interested only in what the camera sees but in ‘construction’, meaning what was behind the sets. They essentially employed panels that they used to create the exact dimensions of walls. Today that system has been abandoned because thanks to modern technology no shape is impossible. Now set designers are only interested in what the camera sees.” 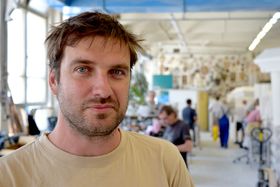 Štěpán Červený, photo: Ondřej Tomšů Červený has worked on many international projects – and refers to two that have been on a particularly large scale.

“At present there is the series Knightfall, which involves the set of a small town measuring 200 metres by 100 or 150 metres. Otherwise, if we’re talking about moving sets, there was the movie Snowpiercer, which was filmed in 2012, I believe. For that we built a 100-metre long, four-wagon train. The wagons could move, I think, 20 metres to each side. They mainly shot interiors, but it was possible to see through all four wagons, so we had to simulate movement, turning and shaking.” 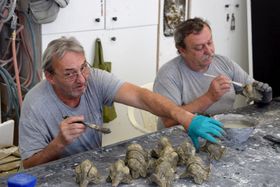 Photo: Ondřej Tomšů As for the materials they use to construct sets both at Barrandov and elsewhere in the Czech Republic, wood is usually the starting point.

“We need to use materials that can be worked with quickly, because there really is very little time. The basic material is wood and then we use medium-density fibreboard, chipboard, polystyrenes and gypsum. Then the main thing is choice of the paints for the sets.”

“In most cases we are informed that some kinds of action during shooting – such as stunt work or explosions – may lead to the sets being damaged. So the sets are prepared for this. Of course it can happen that they suffer other damage, usually during the preparatory phase. But usually it’s minor damage that can be repaired quickly.” Photo: Ondřej Tomšů The advent of CGI and other technology has changed the face of the movie industry. It will likely also impact his profession, says Barrandov’s Štěpán Červený.

“It’s such an expensive undertaking that it’s now still worth constructing sets. But the time is definitely coming when the costs will balance out and then it is of course a question of what becomes of us. So the future is definitely uncertain.”