Traditional Easter celebrations in the Czech Republic have a strong religious connotation. However, many of the customs connected with this season date back to pre-Christian days. This is especially true of the eastern part of the country. Moravia is a historically and culturally distinct region and this is reflected also in the way local people celebrate this most important Christian holiday of the year. 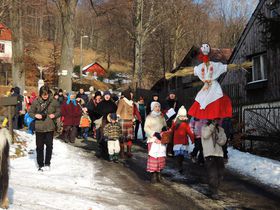 Photo: Jana Beranová, Czech Radio If you set out east from Prague, travel some 250 kilometers, turn off the highway, you might feel like you are in a different country. This region of the Czech Republic, bordering on Slovakia, is truly distinct in its traditions and culture. And this concerns Easter more than any other time of the year. It is as much a religious festival as it is a celebration of spring and the new energy and life it brings to Nature and people. Jana Poláková is an ethnographer at the Moravian Museum in Brno. She explains that for women, Easter really starts on the fifth Sunday of Lent:

“Passion Sunday is celebrated by girls. They make an effigy of Death, dress it in rags and ornament it. It symbolizes winter and is carried out of the village and then tossed into water or burnt. These days, however, the girls usually get rid only of the clothes and ornaments and keep the effigy itself for next year. A fairly new custom is also to make a small procession around the village, carrying the Death effigy, singing folk songs, knocking on doors and collecting eggs or money. Then the participants either divide what they collected and go home, or they have a meal together.“ 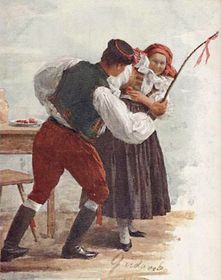 Photo: Public Domain Now we come to the practice of whipping girls and women at Easter. This is a custom that is sometimes difficult to explain to foreigners. On Easter Monday, men and boys walk around with whips weaved from willow branches and symbolically whip women - young and old. Ethnographer Jana Poláková explains the meaning of this particular and maybe strange custom:

“The idea was that the strength and power of spring was concentrated in a freshly cut willow branch and was transferred to the person being whipped. That is why traditionally girls‘ legs were whipped with willow branches to keep them healthy and strong. That is also why in the olden days the roles used to reverse and the next day women would whip men.

“During the year, your body collects a lot of illness, evil, and unclean power. People believed that when the fresh willow branch touched the human body, it gave its best and accepted all the worst from it. So when the whipping was over, the whip itself would be burnt or thrown away so that it would not be connected with the people and households. All the evil and bad it had sucked in from the persons it touched was meant to go away.” Czech Easter market, photo: Jekatěrina Staševská Like other religious festivals, Easter is commercialized, though not as much as Christmas. According to Jana Poláková, this is largely due to the fact, that Easter is not so much about presents and gifts, as Christmas is:

“Easter eggs are given as presents, as a symbol of new life. Even though, during the willow whipping, children get chocolates and sweets, and men often get a shot of brandy. In other words, Easter present-giving is only about food and that is probably why the commercial aspect is not as strong as with Christmas. Yes, you can see special chocolates and some other Easter-related items in the shops, but Christmas is incomparably more commercialized. 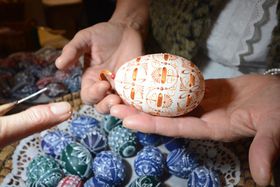 Photo: Eva Turečková, Czech Radio “The egg was not just a symbol of new life but also a coded message from the girl to the boy. In earlier times, there were quite strict rules about what could, or rather could not, be openly said especially about intimate relationships. So the painted eggs gave girls the opportunity to send a message to a boy. And there were different colors to indicate whether he would have a chance if he wanted to court her. Some girls even wrote messages on the eggs and then they had to be very careful about which boy got which egg, so that the message would reach the right boy. So boys would not be allowed to choose an egg themselves. They would get their egg and other presents depending on the message the girl wanted to send.”

Nowadays, there are women who paint Moravian Easter eggs professionally. They do not always use the old methods, but the tradition survives and is an inseparable part of Easter in this part of Europe. Jana Poláková again: Photo: Eva Turečková “These days the women who paint Easter eggs use mostly acrylic paints. After the Second World War aniline colors were used for a time, but they are quite toxic so they gradually disappeared. But traditionally, of course, natural coloring materials were used. Most popular were onion peels that create a beautiful yellow-orange color. If you use red onion peels, you get a darker, wine-red shade. Walnut shells and leaves produced a brown color. If they wanted black, they would use soot but there was a problem to stabilize this sort of coloring – such eggs usually blackened your hands or clothes. It was all much more complicated than today. For example, if you wanted to use the walnut peels, you had to boil them for quite a long time, then let the eggs stay in the solution for hours or even days. So it all needed careful preparation and timing, it was not like today when you start painting the eggs on Sunday afternoon and hand them over on Monday morning.”

With or without detailed knowledge of what lies behind the many traditions that are kept alive in Moravia, Easter in this part of the country is special and worth experiencing. 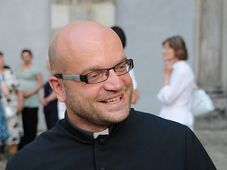 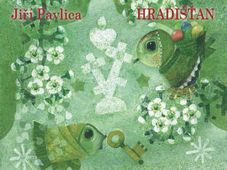 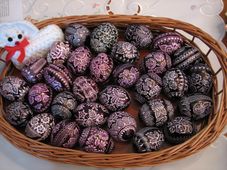 Easter in the Czech Republic is a colourful mix of Christian and pagan traditions. People savor both the spiritual dimension of the…