Few people know that Good King Wenceslas, one of the best-known Christmas carols in the English-speaking world sung on the Feast of Saint Stephen, refers to a Bohemian duke who ruled in the 10th century. Good King Wenceslas is none other than St. Václav, the patron saint of the Czech nation. Paradoxically, the carol is almost unknown in this country. 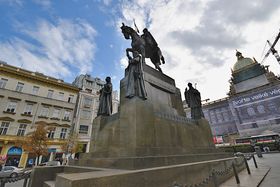 Statue of Saint Wenceslas at Wenceslas square in Prague, photo: Ondřej Tomšů Good King Wenceslas is a Christmas carol, although there is no reference in the lyrics to the nativity. Instead the carol sings the praises of Duke of Bohemia Václav I, a „righteous king“ known for his great piety who is said to have visited the poor and even prisoners to give them alms. Legends about Václav’s goodness and princely vigour abound. He was considered a martyr and canonized soon after his death which is why today he is known as St. Václav, the patron saint of the Czech nation.

How this patron saint got into the popular British carol is not clear although there seems to be no doubt about the fact that he is its central figure. Although Václav or Wenceslas was, during his lifetime, only a duke, Holy Roman Emperor Otto I posthumously conferred the regal title on him and that is why, in legend and song, he is referred to as a "King Wenceslas“.

Legend has it that the pious duke would rise in the night to visit the poor, accompanied by only a page, and that is the story told in the popular carol.

Good King Wenceslas looked out, on the Feast of Stephen,
When the snow lay round about, deep and crisp and even;
Brightly shone the moon that night, tho' the frost was cruel,
When a poor man came in sight, gath'ring winter fuel.

"Hither, page, and stand by me, if thou know'st it, telling,
Yonder peasant, who is he? Where and what his dwelling?"
"Sire, he lives a good league hence, underneath the mountain;
Right against the forest fence, by Saint Agnes' fountain."

A later verse tells of him giving courage to the page who wants to turn back in the harsh winter weather:

Sire, the night is darker now, and the wind blows stronger;
Fails my heart, I know not how; I can go no longer."
"Mark my footsteps, good my page. Tread thou in them boldly
Thou shalt find the winter's rage freeze thy blood less coldly."

The lyrics are by the English clergyman and hymn-writer John Mason Neale who wrote them in 1853. Neale was well-versed in languages and was known for his devotion to church traditions and literature. According to Czech sources, Neale's lyrics are a translation of a poem by the Czech poet Václav Alois Svoboda, published in Czech, German and Latin.

Somewhat surprisingly, the lyrics are set to the melody of a 13th-century spring carol "Tempus adest floridum" ("The time is near for flowering") first published in the 1582 Finnish song collection Piae Cantiones.

This unlikely merger of a 13-century spring carol meant for dancing and a legend about a pious Bohemian king produced one of the most popular Christmas carols in the English-speaking world.

It was parodied by Spike Milligan in Goonish voices as "Good King Ecclesias" and has been covered by musicians such as Joan Baez and REM. It even made the Big Bang Theory, where it was sung by Sheldon.

Although there are several Czech translations of the lyrics, somehow the carol never really caught on in the Czech lands. 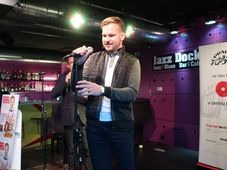 Martin Chodúr, a Czech singer and the winner of the 2009 Czech Pop Idol, has released his first Christmas album called Hallelujah.…