The four wives of Charles IV

Charles IV was married four times (more than any other Czech ruler) and had 12 children in wedlock. In this week’s special we look at what medieval chronicles say about his royal consorts, children and his quest for a son. 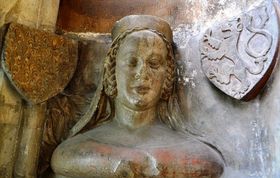 Blanche of Valois, photo: Packare, CC0 1.0 As was common at the time, Charles’ first marriage took place when he was still a young boy being reared at the French court. His child bride was the French princess Blanche of Valois (1316–48) who was of the same age. Historian Václav Zurek says that despite the fact that the match was politically arranged it was happy and Blanche was Karel’s favourite wife.

“It was a typical child-marriage. They were engaged and married at the age of seven and they started to live together five or six years later. They were together for quite a long time –until 1348 and they had two daughters. According to medieval chroniclers it was a great love, for both it was their first marriage and they were together from a very young age.”

Despite this Blanche did not have an easy time in the Czech lands. Charles was sent to Italy by his father where he spent over four years while she was left alone in Prague. The beautiful Blanche loved finery and with her charm and good nature soon won people’s hearts. Charles and Blanche had two daughters, Margaret and Catherine before Blanche died at the age of 32. The cause of death is not clear, but historians speculate she may have died of the plague.

A year later Charles married Anna of Bavaria (1329–53). This time the match was of his own choosing and like the others it was politically motivated. According to Václav Zurek more so than most.

“All four marriages were political marriages, but in the choice of the second wife politics was even more important than in the others. Charles chose a wife from the dynasty of Wittelsbach, his wife was from the second most important dynasty in the empire and the marriage gave him a much stronger position in international politics.”

Anna of Bavaria was twenty when she arrived in Bohemia in 1347 and was seven months pregnant. She gave Charles the longed-for son, who was christened Václav, but their joy at producing an heir was short-lived. Vaclav died before reaching the age of two. His mother survived him by 13 months, dying after a bad fall from horseback. 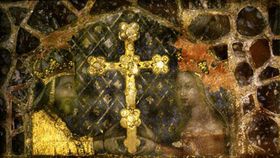 “This young princes was to have married his son Václav, but he died prematurely and so Charles, who needed a wife –because he was still without a son –married her himself. And it was a good choice because she gave him a son.”

Although the couple waited 5 years for their first child – it was the young Anna who gave Charles his beloved son Václav(1361–1419). They also had a daughter Elizabeth and Anna died at the age of 23 giving birth to their third child, another son who died at birth.

Charles was once again free to look around for a wife. His choice fell on Elizabeth of Pomerania, (1345 or 1347–1393),an energetic and strong woman with whom he was to have six children. Despite the age difference Elizabeth was the first real partner for Charles, with whom he consulted political matters. Václav Zurek again:

“When Charles was not in Bohemia she tried to rule the country in his place, she even led an army against some invaders who attacked the kingdom of Bohemia. This was a big difference because the first three wives never engaged in politics. But Elizabeth of Pomerania clearly tried to help him in politics.”

Elizabeth of Pomerania, photo: Michaelsanders / Public Domain Charles and Elizabeth had six children –four of them sons, although two died young. By this time the rivalry among the princes was intense. Apparently Elizabeth found it hard to accept Václav’s privileged position at court and tried to win favours for her own two sons.

Many legends surround Charles IV fourth wife – she was said to be exceptionally strong and could twist forks and snap swords with her bare hands – a skill which she reportedly used to entertain visitors to the court. Elizabeth survived Charles - and despite her physical strength his death was a blow she found it hard to recover from.

“Elizabeth survived Charles and according to medieval testimony she was really sad during the funeral ceremony, so sad she could not carry out the duties she had at the ceremony. They say she was devastated with grief.” Charles IV As regards the question of mistresses at Charles IV’s court there is little to go on. There are indications that during his years in Italy Charles IV indulged in female company and he is known to have had at least one illegitimate son – a boy named Guilloume in France whom his father first met when he was 12. Historian Zurek says that while mistresses abounded at royal courts of the time, Charles the IV did not have the reputation of a man who cheated on his wives –for a very good reason.

“The picture we get is that he was not this kind of ruler, i.e. a man with mistresses, but we know that this official picture was “painted” by a man in the services of Charles IV who carefully looked after his image. What we now call public relations was a very important part of his politics. That is why today we have this image of Charles IV as an ideal ruler.” 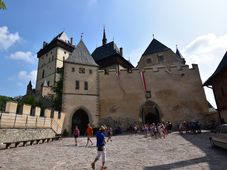 The Czech Republic’s famous Karlštejn castle, built by the Bohemian King and Holy Roman Emperor Charles IV, as a treasury for the crown… 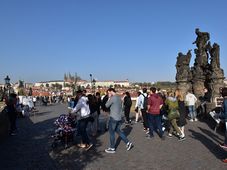