The view from the square: a unique perspective on seven decades of Czech history

This year, as we mark the 20th anniversary of the fall of communism, we are reminded how much of twentieth century history has passed through the Czech capital. The focus of much that has happened in Prague over the last hundred years has been Wenceslas Square, tree-lined and nearly a kilometre long, right at the heart of the city, and with the bronze statue of the Czech patron, Saint Wenceslas, standing guard at the top of the square. One person who has lived on Wenceslas Square nearly all her life is Věra Kölbelová. From her unique vantage point she has witnessed many of the events – joyous, dramatic and tragic – that have shaped the Czech nation over the last seventy years. She shares some of her memories, an eye-witness at the very heart of recent Czech history. The former parliament building and the National Museum “My name is Věra Kölbelová. I am a 74-year-old woman. I am a retired physician, a gynecologist – obstetrics was my field – and I am standing at my window just above the large street coming through the top of Wenceslas Square. I have been living in the same place since I was four, now only with my husband, but I can still see all the members of my family in the sitting room or anywhere in the flat.

“My flat is in the eyes of modern life very old-fashioned, but I want to keep it as I have got used to it. Sometimes it’s hard, sometimes it’s really ridiculous. But, you know, life is changing and I would like to have one place where I feel – with my husband – safe and with things which I love and which are bringing me a feeling of safety and balance in life.” “At the time when the German occupation started, my mother had to quit her position in the hospital, because there were not enough free working places for men, so she joined my father and from that time she was the nurse at my father’s private practice. He was a doctor as well, and he had his practice here in this flat too.

“I have one very unpleasant memory from the time of the Nazi occupation. They had their headquarters here on the other corner of our street - the Gestapo were based there - and while I was going to school each morning, I had to go past the German soldiers being on guard, going forwards and backwards with their heavy boots, making a funny ‘clink’ noise on the pavement, which came from the granite paving stones. I was very afraid of these silhouettes of two men going backwards and forwards with their greyish helmet on, having their weapon just in front of their bodies.

“I remember the time of the Prague revolution in 1945 – the Prague Uprising just at the end of the war. We were in our cellar – all the inhabitants of the house were there, sitting on benches, and suddenly the corner house was bombed by a German airplane. It started to burn, and we had to quit our shelter. So we, my mother, my brother and other inhabitants of the house, we went out of the hiding place. We had to climb over the huge mountain of bricks and wooden beams. I can well recall the fire beneath me. We crossed Wenceslas Square. We had in front of the group a man holding the flag of the Red Cross. And in the middle of the square, just beneath the statue of Saint Wenceslas, the Nazis shot him dead and we continued our run. We ran. But I can still see his body just on the ground, and he was shot because of us. So, this was 1945.”

The era of Stalin and Gottwald 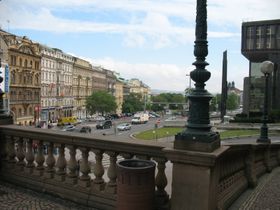 “Then came communism. I was a student at the grammar school, the ‘Akademické gymnázium’, in Štěpánská Street, very close to Wenceslas Square. One day we came to school and half of our professors were just thrown out, because only the members of the party could be the members of the teaching team of young students. So at that moment we lost our most beloved professor of history, Czech language, Latin, aesthetics and drawing. It was considered that they can’t have their positions any more, because they were considered politically unreliable.

“When [the first communist president] Klement Gottwald died, the main part of the funeral took place here on the square. The body was carried, and I remember there were three or maybe two rows of soldiers along the coffin. And one of the young soldiers just collapsed, fainted. It was a big sensation. Ten policemen ran there, pulled him out of the place and another quickly took his place. I was so sorry for that young man because he couldn’t bear it any longer. He had been standing from five in the morning, and this was noon time. This is my memory of Gottwald’s funeral. 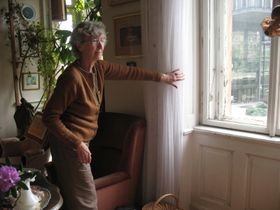 “I wasn’t here when the Russian occupation started in 1968. There were tanks along our street. We were spending our vacation in what was Yugoslavia at that time. My mother was here and we were very afraid what was happening here, so we returned back home from the beach, with our small daughter being one-and-a-half years old.

“In 1969, at the beginning of winter, Jan Palach sacrificed himself just on the upper part of Wenceslas Square. He burned himself. I wasn’t present, but my mother was. She told me that one of the men employed with the street cars – because at that time the street cars were still going past here – ran out of the street car and tried to cover Palach with his fur coat, to put all the flames down. Palach was severely injured, with 80% of his body burned, and there was no chance of saving him. But the man who helped him was very brave. We knew him personally because the offices of the street cars were in our house.” 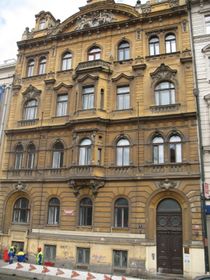 The house where Věra Kölbelová lives “Then came a period which was very dull greyish, and for my whole family it was an unhappy time.

“When I was a little child there was a wonderful, well-kept park leading up to Wenceslas Square, and at the top of it, or on the corner of it, there was a beautiful, large Japanese or Chinese cherry tree with white blossoms on. And I remember when they started to build the metro here – it was 1972, I suppose – one day they came and put chains around the tree, and they pulled it out, with all the wonderful, dying white flowers on. And with my grandma, who was beside me, we were crying a lot. At that moment I knew that a new period of the whole surroundings here had started.

“A main junction of two freeways was built here, one going from left to right – it means in a southerly direction – and the upper one going in the opposite direction, with a lot of traffic, not very tastefully planned into this place. It was a horrible feeling seeing for the first time not just cars, but lorries, buses, everything, all the traffic passing our window with a lot of smoke and a lot of noise as well. But still this place is the place where my home is. So I can’t tell you it’s a bad feeling. It disappoints me, the situation, but I hope it will be in some years rebuilt as it was, with flowers, with trees, more greenery, and of course as a more silent and peaceful place, as I can still see in my memories.” “And then came 1989 - the demonstrations at that time of the so-called Velvet Revolution. I can still see very vividly how our street was full of police cars, and I remember the policemen just pulling and beating the young students here in front of my window. And once it happened that a young policeman was beating a student on his back, and I could see it from my window. I tried to open the window and shout, ‘Stop it, you will hurt him, his kidneys are there.’ It was my husband who pulled me back from the window, saying, ‘Věra, they will come and they will beat you. Stop it!’ So I didn’t help that young student, and to this day I’m just unhappy that I didn’t help him.

“When we knew that the whole communist era was coming to an end, we were full of optimism. Probably we were not too realistic at that time, not knowing that we would have to work and go a long, long way until real democracy would be re-established in this country, but it was so beautiful, you know. There were thousands and thousands of people shouting, singing in Wenceslas Square, and our patron Saint Wenceslas should also be happy. I think he accompanies us all the way.”

The place I love to live Wenceslas Square “During the last 20 years, Wenceslas Square has changed a lot. It’s not only the promenade, a walking area for the foreigners, but there are funny shops that weren’t there before, there are casinos, which we hate, there isn’t a normal bakery, for instance, and there was a beautiful bakery here at the middle of Wenceslas Square. There are a lot of tourists here, a lot of drug dealers just on the corner here, who we are afraid of. I hope the whole situation will become better. They plan to bring more greenery, they plan to put more trees, and maybe my grandchildren will see in the future, another, more beautiful place. But still, it is the place I am living and I love to live. I think Wenceslas Square is one of the most beautiful places and squares I have seen in my life, and I have seen a lot of them.”

Flag expert: Czechs only bring out their flag in emotional times

The national flag of the Czech Republic, which is the same as the flag of former Czechoslovakia, will celebrate its centenary on March…

Did the outnumbered Hussites defeat the crusaders at the Battle of Domažlice by singing? Modern-day historians are sceptical. But for František…