The year in Czech sport

2016 was a mixed year for Czech sport. There was quite a lot to celebrate, with the country bringing home 10 medals from the Rio Olympics, including one gold, and lifting tennis’s Fed Cup yet again. On the downside, the country’s footballers had a disastrous Euro 2016, picking up just one point. 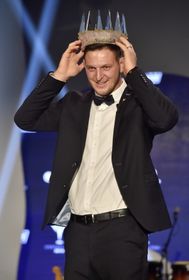 Lukáš Krpálek, photo: ČTK It goes without saying that the biggest event of the year in world sport was the Olympic Games in Rio de Janeiro. The Czech team made a respectable showing in the Brazilian metropolis, collecting a total of 10 medals: one gold, two silver and seven bronze.

The country’s canoeists accounted for three of that haul, including silver in the men’s K-1 1000 metres for Josef Dostál. Czech female tennis players also impressed with three medals, among them bronze for Petra Kvitová.

But the biggest Czech star of the tournament was without doubt Lukáš Krpálek. The country’s flag bearer at the opening ceremony, he was the only member of the team to top the podium after securing the country’s first ever Olympic gold in judo. His victory came in the under 100 kg category with defeat of Azerbaijan's Elmar Gasimov.

In a very moving moment, Krpálek held up a photo of his late friend Alexandr Jurečka while the Czech anthem was playing during his medal ceremony.

The man from Jihlava shared his joy at winning with Czech Television – but said he had been a tad sluggish after the final.

“Those are moments that you never forget as a sportsperson. For the majority of sportspeople, this is the greatest achievement you can reach. When I was standing on the podium it was one of the nicest moments of my life.

“I was a bit dopey, though, because the final took a lot out of me. I took a couple of blows to the head and couldn’t see properly, which has happened to me in the past a few times. So I perhaps didn’t enjoy it to the absolute maximum. But still it was a great feeling.”

It was no surprise to anybody when Lukáš Krpálek, who turned 26 last month, was named Czech Sportsperson of the Year.

Paralympians pick up seven medals in Rio, including gold for Petráček

At the Paralympics in Rio in September the Czechs won seven medals. Again the tally included one gold – for swimmer Arnošt Petráček in his category in the 50 metre backstroke. 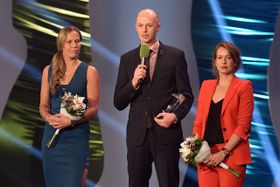 Lucie Hradecká, Petr Pála, Barbora Strýcová, photo: Filip Jandourek, ČRo The Czech Republic’s women confirmed their recent dominance in team tennis. They lifted the Fed Cup title for the fifth time in six years, and the third time in a row, with a hard-fought 3:2 victory over France in November.

Barbora Strýcová was the heroine of the hour, winning the fourth rubber to save the Czechs’ skin and set up a dramatic doubles encounter with the hosts in match five.

And in that decider she and Karolína Plíšková achieved a 7-5 7-5 victory over Caroline Garcia and Kiki Mladenovic to spark celebrations on the Czech bench.

Plíšková, herself the unexpected saviour of a Fed Cup final in the past, pointed out that Strýcová hadn’t even known whether she would be sent onto the court in Strasbourg.

“She never knew, which made things harder. But Bára played an excellent singles match and then again in the doubles. We’ve played quite a few doubles matches together so we believed in one another.

“She’s a kind of motivator – she’s able to crank things up in the doubles. And if either of us has a weaker moment, the other one steps up. So far it’s worked out for us.”

Strýcová herself said her fourth Fed Cup medal was the sweetest to date.

“You never get tired of this. Victories, cups and medals never get old. Each one has its own special story. And for me this one in particular will be sweet for me, when I stop playing and look back at my career.”

Meanwhile the Czechs’ non-playing captain Petr Pála became the most successful holder of that position in over half a century of Fed Cup history.

Off the courts, Petra Kvitová had to undergo emergency surgery when an attacker stabbed her in the hand. The two-time Wimbledon winner, who is 26, is confident of a full return to tennis next season. 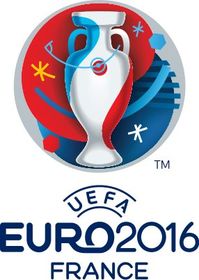 The Czech Republic’s footballers didn’t exactly cover themselves in glory at the European Championship in France. Quite the opposite. After a perhaps predictable defeat to Spain in their opening game, things looked up slightly with a 2:2 draw against Croatia. But a 2:0 defeat to Turkey saw them finish bottom of their group with just one point to their names.

Where did it all go wrong for the Czechs, then still managed by Pavel Vrba? That’s a question I put to sports journalist Michal Petrák, who spent a lot of time around the Czech squad in France.

“Generally speaking, I think the team, the players, approached the games with a lack of confidence. That was their biggest problem, I think.

“Certainly the squad isn’t world class. There aren’t many players who play in top clubs, except for Tomáš Rosický and Petr Čech.

“But I think they just approached the games against Spain and Croatia with the mind-set that they are players from Real Madrid, from Barcelona, and they are almost unplayable.

“I think this was the biggest problem – they lacked confidence. And they haven’t really shown what their potential is.

“If you compare it to the qualifying stage, to the games against the Netherlands for example, they haven’t really reached their potential.”

France was something of an end of era for the Czech national team, with Čech and Rosický among those who later announced their international retirements.

Viktoria Plzeň - Slavia Praha, photo: ČT24 In domestic soccer, Viktoria Plzeň won the top flight title with a full three rounds to go. It was the fourth occasion the West Bohemians had lifted the trophy since the 2010–2011 season, when they won it for the first time in their history.

Plzeň were virtually guaranteed the title after overcoming main rivals Sparta Prague in April. But their manager Karel Krejčí said an earlier victory over the country’s most successful club in November had set them on their way.

“Though we were reduced to 10 men, the boys beat Sparta and I think that inspired them. We then went on a run to the end of the first half of the season when we managed to win tough away games. I think our game at Sparta also showed that we’ve got a strong team.”

Sparta, meanwhile, have done well in in the Europa League in 2016. The Prague side reached the quarter-finals last season only to be knocked out by Villareal and this term topped a group that included Inter Milan and Southampton. They face Russia’s Rostov in the knockout phase in the New Year. 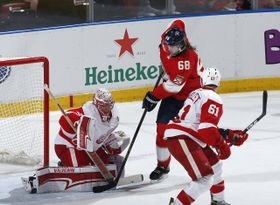 Jaromír Jágr, photo: ČTK Jaromír Jágr became the second highest points scorer in the history of the NHL in December. Now 44, the Czech legend said that felt like becoming the highest scorer as the record holder, Wayne Gretzky, was “from another planet”.

In the domestic hockey Extraliga, Liberec were crowned champions after defeating Sparta Prague with an overtime win in game six of the playoff finals. It was the first league title in the White Tigers’ 60-year history. 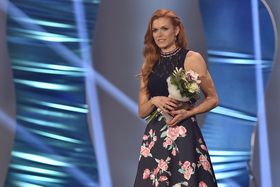 She was still ecstatic when she spoke to Czech Radio, minutes after confirming the trophy in the Russian resort of Khanty-Mansiysk.

“It’s just amazing. I don’t know what to say. Before the final race the guys calculated the points and told me all I needed to do was finish ninth or better.

“In that moment I wanted to win the title so much but it still felt unachievable. Then when I realised I was likely to come fifth… it was the best feeling ever.

“I think I’m even happier now than when I got the Olympic medals. I always dreamt of something like this. I hope I’ve made people watching on TV as happy as possible – I hope they feel like I do.”