Zuzana Wienerová emigrated to the United States in the 1960’s with her late husband, RAF pilot and World War II hero Jan Wiener. Mr. Wiener was imprisoned by the Communists for five years after returning from Britain. We spoke today about their romantic love story, their life in the U.S. and the challenges they faced. I first asked her how she and her husband met. 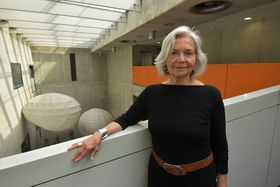 Zuzana Wienerová, photo: Ondřej Tomšů “Well it’s a long story because I was only thirteen. The bell rang, I went to open the door, and there was a friend of my father - who had died when I was just four years old. This old friend of the family introduced Mr. Wiener. I was a teenager and I blushed, because he was a very handsome man who looked a little bit like Paul Newman and he was asking for a rental. We had a huge, beautiful apartment and after the Communists came we always had to rent one of the rooms to some Hungarian workers, or to someone from the Hungarian or German Embassies. The room was not free at that time but after three months he moved in.

“It was quite exciting for me, because there were all these beautiful women coming after him, or he after them. One would be with him in his room, one would be under the window and one would be ringing the bell. There would be letters and the phone was ringing all the time. So I was going wild, watching all that. It was exciting. I think that as a teenager I was already infatuated with him a little bit.”

What did your mother think about the age difference between the two of you?

“Well, my mother found out later, when Jan invited me for dinner when I was sixteen and a half. I had three brothers, and my mother was in the mountains with the two older ones. I always wrote diaries and when Jan invited me for dinner I was very pleased and I wrote it in my diary. Then, when I came home once from one of my “school trips”, which was not really a school trip but rather a trip with Jan to the Krkonoš Mountains, my mother asked me how was it? I lied and she suddenly took out my diary from under the coffee table. She was really quite pale, and she asked me what is this - is it true or is it your fantasy?

“I said this is my diary, and you should never take it and look into it. And she said I was very worried, because I heard that somebody saw you with Mr.Wiener. I told her that I was in love with him, and that he was in love with me, and she said that she had to talk to him immediately. She called him and Jan then invited her for dinner at Bruselská Restaurant, which unfortunately is no longer the beautiful restaurant that it was from Expo 58. Jan told my mother that he was in love with me and that he eventually would like to marry me and not to worry.

“She asked him, what are you going to do when you are sixty? He said, I am going to divorce her and marry a younger one. My mother had a sense of humor but she had some fears and anxieties.”

But in the end she accepted it – how many years were you together?

“Well, there was a twenty-four year age difference. I got married right after graduation, when I was nineteen and Jan was forty-three. I think that she did accept it, because not only was Jan attractive, charming and handsome, but he was also a very good man who had a lot behind him – things that many people never lived through. He was a solid man who was always helping my mother with her three boys. They were constantly in trouble with the police, and when the police came he would always straighten it out when he lived in our apartment. So she knew that he was a good man.”

Did he talk about his time with the RAF and how did he remember those times? 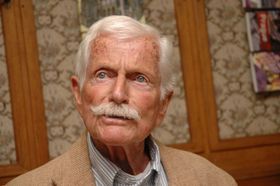 Jan Wiener, photo: Tomáš Vodňanský “Not at the beginning, I really didn’t know much about it. Later, after we got married and emigrated, I heard these stories. It was when he started teaching in the school in the U.S. that I slowly found out about his escape and exodus from Prague in ’39 with his father. Later, in Yugoslavia, they were trying to get a visa to the U.S. or to England where they had relatives. Jan was Jewish, and his most important relative was his aunt, Dr. Gertrude Bondy. She was his father’s sister and she had studied psychoanalysis with Sigmund Freud in Vienna. When she got married to Max Bondy, they emigrated to Switzerland in ’38. It was fortunate that they left Prague and lived in Switzerland for a few years before buying an estate in Massachusetts, which was turned into a beautiful, wonderful boarding school that we were eventually able to emigrate to in 1964.”

And you both became teachers there?

“I studied psychology here in the Czech Republic with the incredible Dr. Vondráček, but only for a year and three quarters. Then we emigrated and I had no other formal education. But I think I had the best courses in psychology in the 1960’s in the boarding school in America.

“The 60’s were similar to what is now happening globally; what was happening in Germany, in America… the war in Vietnam. I was teaching Russian and dance - which I just loved. I loved languages, but I had never had a formal education. The headmaster was my husband’s cousin and he said to just try it, that the students would tell him if I couldn’t do it. So I did it, and I think it went well. We went with the students to protest against the Vietnam War in Washington D.C., and I was in Woodstock with all these wonderful musicians, such as Joan Baez and Santana…but it was also a lot of drugs, and when I look at the old year books, sixty-five percent of the students are gone – OD.”

When you moved, did you plan on it being permanent?

“No, it was very interesting. We got permission because of Eleanor Roosevelt. She was on the Board of Trustees with Dorothy Thompson, from the school, so the aunt knew them. She asked Eleanor Roosevelt if she would be so kind as to write to her nephew in Prague to invite him to teach for a year. I have the letters, which is amazing, and we got the permission. Jan was called to the police on Bartolomějská, and they asked him how he knew Mrs. Roosevelt. He said that he didn’t know her, but that his aunt did.

“Jan had two sons from his first marriage. So they told him that they would let him go, but if he didn’t come back after a year he would never see his sons again. We didn’t come back, but fortunately then came 1968. Edward Keneddy, who at that time was Senator of Massachusetts, immediately got them out. They left for Austria, together with my two brothers, and we got them to Massachusetts.”

What were the post-war years like in Communist Czechoslovakia for you and your husband?

“I was born in 1944, so I remember the fifties, and I had an idea of what the Communists were about and what was happening because some of my family’s friends who were lawyers suddenly became manual workers. My mother absolutely refused. We never went to Pioneer; we never became Svazaci (Communist youth organization). But of course Jan, coming back and having been in the Royal Air Force, was immediately considered a spy and he was put in a labor camp and prison for five years from 1950 to 1955, but survived.

“That is the most shameful thing of this nation; they punished their heroes who were ready to put down their lives for the country.”

So in the end it was a positive thing that you moved to the U.S. - but there must have been challenges…

“Of course. My English was not perfect, and I thought we were going for a year. Suddenly Jan decided not to go back, and it was hard for me. I missed my family that I had not seen in eight years until we got our citizenship. Letters were censored. Then again, I was with a man that I loved, and being an inquisitive person it was exiting for me. Jan was exciting and every summer we travelled the States and Europe.”

You had two children in the States. Did they grow up feeling more American or more Czech?

“My children were born in America but of course Jan and I spoke Czech together and sang Czech songs. So Joseph and Tanya (Tanya is now forty-eight and Joseph is forty-four ) speak Czech, but my grandchildren do not.”

“When we got our citizenship in 1972, we would then travel through Europe every summer and we would also stay in the mountains in Suchá near Krušné Hory. My children grew up with friends of my friends, getting the same childhood that we had, with blueberry picking and mushroom hunting and bonfires… So they lived through it.

And they love Prague and the love Germany.

You now split your time between the U.S. and the Czech Republic. Where do you prefer to live?

“I think that everyone should live in different places. For me it’s the most enriching experience. And now, working with the American students here, that’s what I’m telling them. Complicate your life, move around, live in different places and work manually… I’m going to be seventy-four, so I can say from experience how incredibly important and enriching it is to have the contrasting situations.”

Thank you so much for sharing your story with us today.

“You are so welcome, it was wonderful.