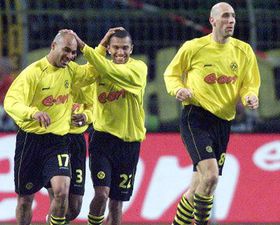 Borrusie Dortmund, photo CTk Slovan Liberec went into their UEFA Cup quarter-final second, away leg against Borussia Dortmund with high hopes - after a nil-all result at home, a scoring draw on Thursday would have seen them through to the semis. But after a goalless first half, the 1997 European Champions simply demolished Liberec in the second, thrashing them 4:0. There is no question of blame - Liberec were simply outclassed by a Borussia side boasting several talented Brazilians and a couple of talented Czechs; both Tomas Rosicky and Jan Koller had great games, with Koller - who is really on form these days - netting his side's second.